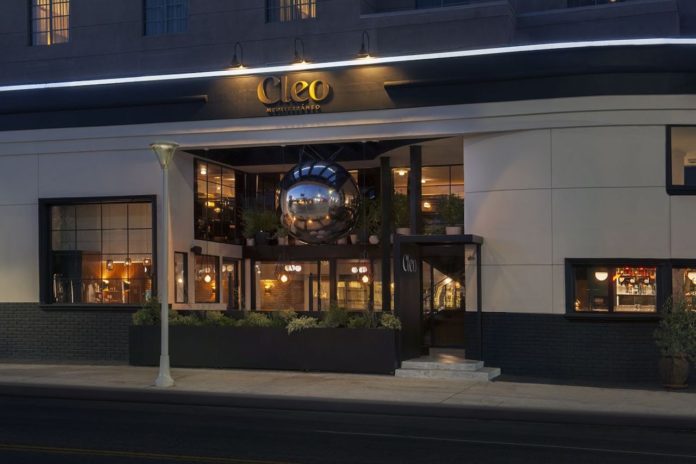 “Building on the incredible reception we’ve seen with Cleo Hollywood and Cleo L.A. Live, we are thrilled to open our third location in L.A. and bring our award-winning concept to West Hollywood,” said Daniel del Olmo CEO of Disruptive Restaurant Group.

“West Third Street is fast becoming a go-to dining corridor in the city, and we’re excited to open our doors in such a vibrant neighborhood and to welcome neighbors, friends, Orlando Hotel guests and visitors in for a fantastic, modern Mediterranean dining and drinking experience.”

“The Orlando Hotel has been a part of our family history for three generations and it has become a landmark on West Third Street,” explained owner, Ken Pressberg, “So, of course, making a decision on the right restaurant partner is very important to us all. We are thrilled to be partnering with such a sophisticated and esteemed group of hospitality professionals as sbe, as we embark on this next chapter for our hotel.”

Executive Chef Danny Elmaleh added, “The new dishes on the menu, from our duck matzo ball soup to our meatball tagine with soft egg, tomato, squash and piquillo peppers, are directly inspired by my life, my heritage and the rich flavors of the Mediterranean and the Middle East. We’ve seen a great response from our restaurants where the new menu is live – including our latest openings in New York and The Bahamas – and I’m delighted to share it with our guests at Cleo Third Street.”

Cleo Third Street opened with a new menu from Executive Chef Danny Elmaleh that reflects his Israeli-Japanese heritage and celebrates ingredients and cultures of the eastern and southern Mediterranean. The restaurant, now open for dinner, will also offer a weekend brunch, lunch, and a takeaway window with small bites to grab on the go.

From grand artwork to cozy accents—a giant seven-foot mirrored ball hanging over the outdoor reflects back all the dinners and activity below, evoking curiosity in passers-by; a rich, earth-toned color palette; stunning tiled backdrops and mosaic accents that nod to the Mediterranean, to a custom mural by popular LA street artist Cryptik, titled ‘FACING EAST’—all of these elements combine to create a captivating dining experience.

Cleo Third Street comes on the heels of two big openings for the brand, including its first location in New York City at Mondrian Park Avenue and its first international outpost at SLS Baha Mar in The Bahamas. Additionally, the brand will continue its international expansion with the opening of Cleo Kuwait within The Avenues Mall, the largest shopping mall in the country, in early 2018. sbe has plans to open six more Cleo restaurants globally by 2021.

Each Cleo location has its own distinct look and feel to complement its surroundings and encourage a social dining experience, all the while staying true to its’ Mediterranean roots.