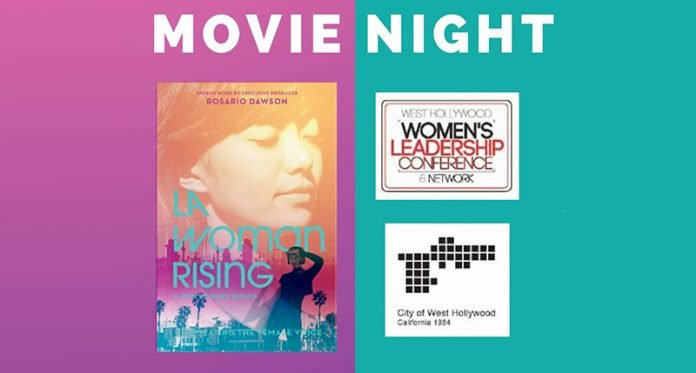 The month of March is National Women’s History Month. The City of West Hollywood is joining its Women’s Advisory Board and Women’s Leadership Conference & Network to host a movie night as part of its celebration of women. The film LA Woman Rising will be featured on Saturday, March 7, at West Hollywood Park Auditorium, located at 647 N. San Vicente Blvd., from 6pm-9pm.

Executive produced by Rosario Dawson, LA WOMAN RISING presents 50 Los Angeles women revealing what motivates them to wake up each morning. Director Nana Ghana gracefully captures the morning rituals and untold stories of uncertainty, struggle and success. Considered a love letter to the real and diverse women of Los Angeles, Ghana’s documentary is a distinct celebration of the female voice.

The night’s program is as follows (times are approximate and subject to change):

Admission is free, with onsite parking.

Nana Ghana, Director and Producer, was recognized by Entertainment Weekly and People magazine as among the “Ones to Watch” out of Sundance 2018 for her co-starring role in WHITE RABBIT, Writer/Director/Actor Nana Ghana has proven her ability to stand out both on and behind the camera. Her most recent work as Director, LA WOMAN RISING, is narrated and executive produced by Rosario Dawson. Ghana made her directorial debut with a short film entitled WATER WARRIOR, which had the distinction of premiering at the Cannes Film Festival in 2016. Ghana was later recognized as Best Director with her follow-up short film, ELECTING, at the Oregon Short Film Festival in 2018. As an actor, Ghana stars in her recurring role on WHAT/IF, a Netflix original series. Other credits include roles opposite James Franco, Janel Parrish, Levi Dylan, Simon Pegg, and Juno Temple, as well as upcoming films MIGHTY OAK and LOST TRANSMISSION, which premiered at Tribeca Film Festival in 2019. Both films have a 2020 theatrical release. In addition to her filmmaker accolades, Ghana’s simultaneous arrival on the theatre scene, in 2017, was just as prestigious. Ghana’s play PELVIC FLOOR, ran 2017 – 2018, which she wrote, directed and starred, debuted at the Hudson Theatre in Hollywood, continuing on to be featured at the Hollywood Fringe Festival in 2018.