The City of West Hollywood released an official statement this evening to address the Friday, September 25th Justice for Breonna Taylor protest, which ended with arrests and violent clashes between the Los Angeles County Sheriff’s Department and protestors on Sunset Boulevard.

The protest flyer used to promote that demonstration has been criticized for inciting violence with its message of “Absolutely No Peace Police” and a picture of man throwing a cocktail bomb at a burning city.

The protest began peacefully, however there were a group of men and women dressed in all black who used umbrellas to shield themselves while they vandalized buildings along Santa Monica Boulevard. A lot of the protestors were part of the same group of people who staged a Dance for Black Lives demonstration in front of the West Hollywood Sheriff’s station the previews weekend, which took place without incident.

The protest on Friday, September 25th escalated with Sheriff deputies shooting at the protestors with pepper balls and noise-making devices to push oncoming protestors back. The city has been criticized for the use of police force after video footage on social media showed a deputy beating a protestor with a riot shield. The incident is currently under investigation.

Eight protestors were arrested. The driver of the black pickup truck that lead the march from De Longpre Avenue to Sunset Boulevard, was one of the men arrested. His truck was impounded.

The regular West Hollywood City Council meeting scheduled for tonight, Monday October 5, was canceled due to broadcasting issues. It was pushed back to Monday, October 19. Community members were expected to address public safety and get an update from City Manager Paul Arevalo, West Hollywood Station Captain Edward C. Ramirez, and the council regarding the protest on September 25th.

The cancellation of the meeting has generated outrage from members of the Black community and its allies. There have been calls on social media for West Hollywood to cancel their contract with Los Angeles Sheriff’s Department. Some are calling out West Hollywood Mayor Lindsey Horvath for not doing enough to protect protesters in the city. 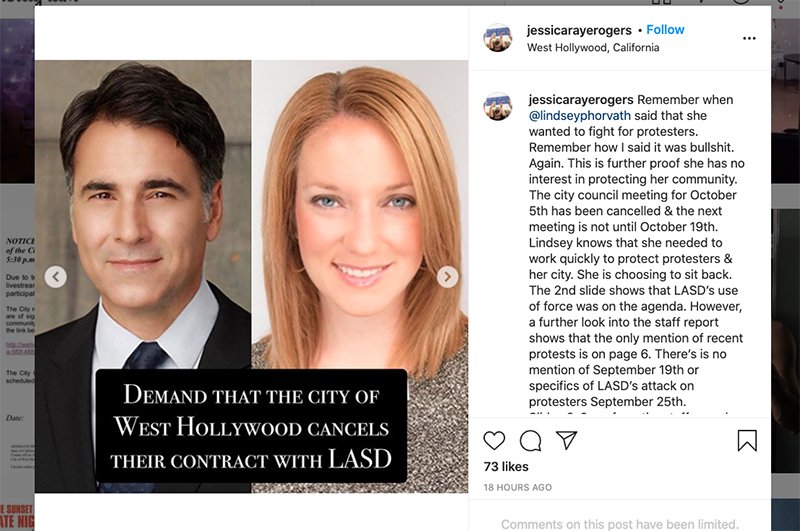 The official West Hollywood statement is as follows:

The City eagerly looks forward to having a conversation about public safety as part of the upcoming West Hollywood City Council meeting on Monday, October 19. Meeting details will be provided at www.weho.org/agendas.

Since two weeks will pass before the community can engage in this conversation, the City wishes to provide additional context about a concern being discussed in the community.

On Friday, September 25 the City of West Hollywood and its contracted law enforcement partner, the Los Angeles County Sheriff’s Department, received notice about a protest to be held that evening in the City of West Hollywood. Dubbed “Justice for Breonna Taylor,” the protest flyer portrayed a man throwing a Molotov cocktail bomb and the words “Absolutely No Peace Police” were circled at the bottom of the flyer.

Many demonstrators arrived that evening in West Hollywood carrying homemade shields, wearing helmets, and donning body armor and body padding while carrying umbrellas. As the crowd made its way down Santa Monica Boulevard from La Cienega Boulevard, there were marchers who began to vandalize buildings and storefronts with graffiti and etching into glass windows. At last count, a total of 65 acts of vandalism were counted.

As activities progressed during the evening, the Los Angeles County Sheriff’s Department made a decision to declare an unlawful assembly and disperse the crowd.

The protest included two trucks leading the crowd with numerous protestors sitting and standing in truck beds. The same two trucks had led a protest through the streets of a neighboring area east of the City of West Hollywood’s boundaries on the previous evening, Thursday, September 24. One driver had been detained and released by LAPD officers after a short chase and altercation.

When these two trucks arrived on Sunset Boulevard on the night of Friday, September 25, Sheriff’s personnel were given an order to stop the two trucks for a number of traffic violations with the aim of removing the trucks from crowds in order to protect safety for protestors, community members, and the commercial area.

Once the vehicles were stopped, Sheriff’s Deputies approached one truck and asked the occupants of the truck bed to get out. As one person got out, a second person that had just exited the truck violently shoved a Deputy to the ground.

Sheriff’s Response Team (SRT) Deputies immediately surrounded the group and arrested them. At the same time, numerous protestors began encroaching upon the Deputies and SRT members employed pepper balls and noise-making devices to push oncoming protestors back. This was effective; most protestors immediately left the area.

Both vehicles were impounded and several arrests were made. Charges included reckless driving, unsecured passengers in a truck bed, taking over the streets, battery on a peace officer, attempt to free a suspect from police custody, resisting/obstructing deputies, and failure to disperse.

During the arrests, a Sheriff’s Response Team Deputy was seen striking one of the suspects on the ankle with the shield he was holding. As with all uses of force, a use of force investigation has been initiated and the Deputy in question will be held to answer for his actions. SRT Deputies are typically selected because of demonstrated maturity, discipline, and ability to carry out orders with the highest levels of integrity in an emergent situation.

The City of West Hollywood has, for decades, served as a safe and supportive gathering place for activists to hold nonviolent demonstrations to express rage against injustice, to raise awareness, and to bring forward social change and reform. The City is also a regular gathering spot for many large-scale events and celebrations, including Pride festivities and Halloween Carnaval. These demonstrations and events have a long history of safety, security, and peacefulness. During 2020, the City has been the site of many peaceful demonstrations that have included as many as 25,000 participants, without incident.

Public safety is always the City’s number-one priority. The City of West Hollywood and its contracted law enforcement partners have an obligation to maintain peace and to protect demonstrators, residents, businesses, and visitors. While the City of West Hollywood passionately embraces the exercise of first amendment rights of peaceful assembly and freedom of speech, it also takes very seriously its important role in safeguarding neighborhoods, protestors, and community members.

Use of force of any kind is rare in the City of West Hollywood. In its oversight of public safety, it is the City’s view that any decisions made and actions taken on Friday, September 25 were based solely upon protecting people and property in the City of West Hollywood from the sort of lawlessness that had been demonstrated the prior night, Thursday, September 24, just east of the City’s boundaries.

The City is deeply committed to community engagement and it encourages community members to take part in the upcoming West Hollywood City Council meeting and public comment period in order to more fully engage in this important discussion about public safety in West Hollywood.

Editor’s note: an earlier version of this article stated that LASD used rubber bullets and cans of tear gas to ward off protestors. A West Hollywood City official states that according to LASD, Deputies employed pepper balls and noise-making devices to push oncoming protestors back. The article was updated to reflect this.