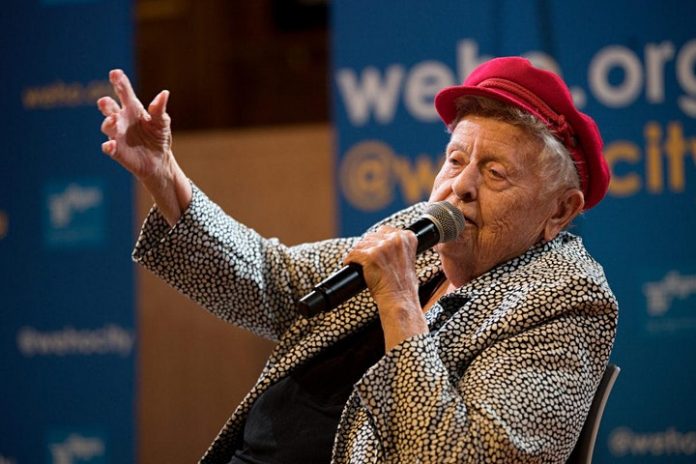 The City of West Hollywood will commemorate Ivy Bottini Day in honor of the late activist and leader Ivy Bottini. The City will host a special night in tribute to the life and legacy of the LGBT/feminist on Wednesday, August 18, 2021, from 7:00 PM – 9:00 PM.

A long-time resident of West Hollywood, Ivy Bottini devoted over 50 years to the feminist & LGBTQ struggles for civil and human rights.

Ivy Bottini Day is presented in collaboration with the City of West Hollywood’s Women’s Advisory Board, Lesbian and Gay Advisory Board and Transgender Advisory Board. Inspired by lesbian and feminist zine culture, this virtual “Zoom Zine” night will feature guest speakers, performances, digital content, live art making and more. To register, click here.

ABOUT IVY
Pioneering lesbian and feminist activist Ivy Bottini died on February 25, 2021 at age 94. Bottini’s activism began when she joined a New York City gathering of luminaries of the women’s movement that included Betty Friedan, Muriel Fox, Ti-Grace Atkinson, and Flo Kennedy. In 1966, she cofounded the first chapter of the National Organization for Women and designed the organization’s logo, which is still in use today. In 1970, she led a group of women to the Statue of Liberty where they hung a banner that read, “Women of the World Unite,” and in 1978, she fought the Briggs Initiative, which sought to ban gays and lesbians from teaching in California public schools. She continued her activism through the AIDS epidemic and became chair of the campaign against the No on 64 Initiative, which would have amounted to firing and quarantining of people with HIV or AIDS. She co-chaired the End Rape Statue of Limitations Campaign, a grassroots campaign that successfully ended statutes of limitations for rape and sexual assault crimes in California in 2016. Bottini was, for many years, a West Hollywood resident and she served as a co-chair of the City’s Lesbian and Gay Advisory Board.

Yet another Ivy Bottini ZOOM event. Didn’t we just have one of these about a month ago.