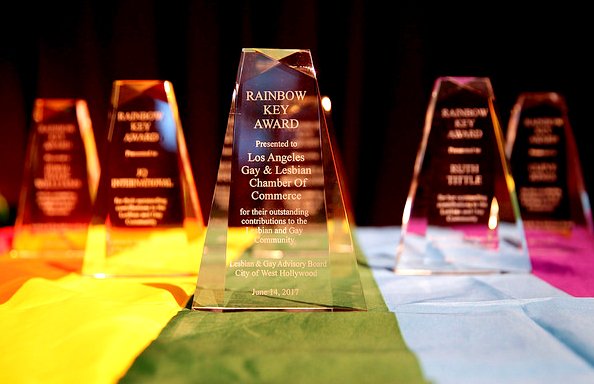 It’s that time of year again. The City of West Hollywood recognized people and groups that have made outstanding contributions to the LGBTQ community with the Rainbow Key Awards on Wednesday, June 14, at the City Council Chambers/Public Meeting Room.

The Rainbow Key Awards date back to 1993. Nominations are received by the City of West Hollywood’s Lesbian and Gay Advisory Board (LGAB). They make recommendations to the West Hollywood City Council. The City Council then choose award recipients.

This year’s Rainbow Key Awards honorees are as follows:

Past honorees have included activists, artists, civic leaders, educators, community organizations, and more. Contributions, whether by an individual or a group, may be in many forms, including the arts, community action, humanitarian action, sports, medicine, armed services, leadership, benefit to the global gay and lesbian community, or in other ways. More than 150 Rainbow Key Awards have been presented during the past 25 years.

For more information on the West Hollywood Rainbow Key Awards, visit: weho.org
To view images of this year’s ceremony, visit the the city’s flickr page at flickr.com/photos/weho/albums/