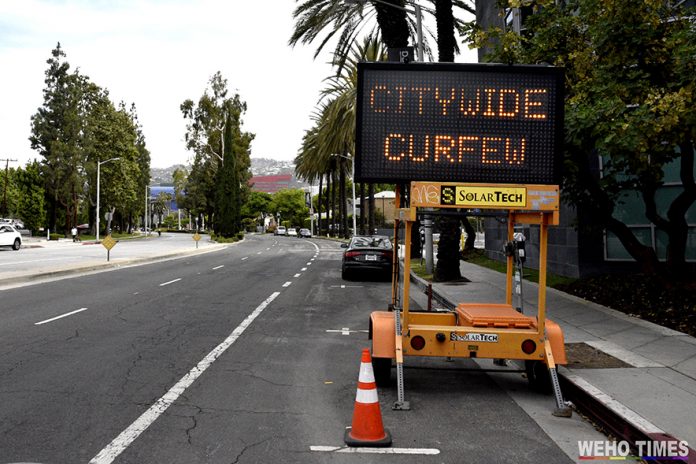 The City of West Hollywood has implemented an Executive Emergency Order establishing a curfew. The curfew will be in effect this afternoon, Tuesday, June 2, 2020 at 4 p.m., ending at sunrise. The curfew is the result of a local emergency as protests and the threat of looting and violence continues throughout Los Angeles County.

The curfew order states: “No person shall be upon the public street, avenue, alley, park, or other public place or unimproved public realty.” This curfew will remain in effect on a daily basis from 4 p.m. until sunrise until such time as it is lifted. Members of the media and people traveling to and from work are exempt. The Los Angeles County Sheriff’s Department will enforce the curfew.

Residents should remain at home; hotel guests should remain safely indoors; and businesses should close in time for employees and patrons to be off the streets by 4 p.m.

The City of West Hollywood passionately supports the fight against racial injustice and the dismantling of systemic racism. The City respects the rights of peaceful assembly and protest. The City decries violence directed against persons and other acts that threaten public safety. The City’s curfew order is aimed at reducing the potential for violence, damage, threats to public safety, and civil unrest.

The City of West Hollywood encourages community members to follow @wehocity on Twitter and Facebook and Instagram and to turn on notifications for up-to-date information. For urgent updates via text message, text your ZIP code to 888-777. In an emergency, call 911. Stay safe and stay home.

Emergency Executive Order 2020-5 (Revised) is available on the City’s website at www.weho.org/home/showdocument?id=46429. For additional details about the curfew order, visit www.weho.org/curfew.

The order reads as follows:

SECTION 1. RECITALS
A. California Government Code Section 8630 provides that a local emergency may be
proclaimed by the governing body, or designee, of a city.
B. On May 29, 2020, protests in downtown Los Angeles resulted in damage, graffiti,
looting and according to news reports, hundreds of arrests.
C. Large groups of protestors have been gathering all day on May 30th in areas
adjacent to West Hollywood, at Pan Pacific Park and heading west towards Beverly
Hills.
D. There was a tense standoff with police and protesters near The Grove shopping
center, with news reports of police shooting rubber bullets and striking
demonstrators with batons while a police car was set on fire and other vehicles
vandalized and some police officer injuries. A Metro bus was also stopped and
protesters climbed on its roof.
E. Los Angeles imposed a curfew beginning on May 30, 2020, to clean up damage
and restore order after days of protests that at times escalated into looting and arson.
Unlawful assemblies were declared in the Fairfax District and Downtown Los
Angeles.
F. Disturbances, and violence, including rock throwing, took place at the West
Hollywood Sheriff’s Station on May 30, 2020.
G. The City joins the protestors and others in their outrage regarding the murder of
George Floyd by police officers. The City seeks to be an ally in the fight against
racial injustice and the dismantling of systemic racism.
H. The City respects the rights of peaceful assembly and protest.
I. With liberty comes responsibility; violence directed against persons and other acts
that threaten public safety, including setting of fires and throwing objects,
endangers innocent persons and first responders charged with keeping the peace.
J. It has been reported that violence is being instigated by outside agitators.
K. Looting, fires, graffiti, broken windows and other damage and disturbances have
occurred, in Los Angeles, West Hollywood, Beverly Hills, Santa Monica, Long
Beach and other areas throughout the County over the past weekend.
L. Los Angeles County established a 6pm curfew countywide over the weekend and
the Governor declared a state of emergency in Los Angeles County. The national
guard has bene deployed to help keep the peace. Other cities regionally have
established earlier curfews beginning on June 1st.
DocuSign Envelope ID: C7CD8845-67CD-4F8F-9BB6-DEC4B72AE2E1
65267.00001\32987834.2
Revised Executive Order No. 2020-5
M. The potential for violence, damage, threats to public safety and civil unrest are
escalating, according to reports of planned activities and social media. Law
Enforcement has received information that additional similar events and activities
to those that took place over the weekend and resulted in looting, fires, graffiti,
broken windows and other damage and disturbances are planned for June 1, 2020.
An event that was scheduled for Crescent Heights and Sunset is reported to have
moved to Sunset and Laurel. In order to safeguard the rights of peaceful assembly
and protest, to protect the safety of West Hollywood residents, property and
businesses as well as emergency and law enforcement providers, it is necessary to
establish a curfew to quell violence and destruction of property.
N. It is the City’s intent to impose only a late afternoon curfew so as to leave
opportunities during majority of the daytime for the voices of the protesters to make
themselves heard.
O. Upon proclamation of a local emergency, the Director of Emergency Services is
authorized to make and issue regulations on matters reasonably related to the
protection of life and property as affected by such emergency and to impose a
curfew under Government code Section 8634 and WHMC Chapter 2.80.
F. This Order is adopted pursuant to the City’s police powers and powers afforded to
the City in time of local emergency such powers being afforded by the State
Constitution, State law, and the Chapter 2.80 of the West Hollywood Municipal
Code to protect the peace, health, and safety of the public, and to protect life and
property as affected by the emergency, in that this Order declares an emergency
and imposes a curfew in order to restore the peace and prevent additional
disturbances, looting, violence as has been seen locally in recent days.
NOW, THEREFORE, I, Paul Arevalo, the Director of Emergency Services for the
City of West Hollywood, do hereby issue the following order to become effective
immediately, subject to ratification within seven days by the City Council:
IT IS HEREBY ORDERED THAT:
SECTION 2. That conditions of extreme peril to the safety of persons and property
have arisen within and around the City of West Hollywood, caused by potential civil unrest and
disturbances and violence at the West Hollywood Sheriff’s Station.
SECTION 3. That the aforesaid conditions of extreme peril warrant and necessitate
the proclamation of the existence of a local emergency and imposition of a curfew.
SECTION 4. That said local emergency shall be deemed to continue and shall be brought before the city council within seven days for ratification. NOW, THEREFORE, IT IS HEREBY PROCLAIMED that as of May30, 2020, a second local
emergency exists throughout the City of West Hollywood; and
IT IS HEREBY FURTHER PROCLAIMED AND ORDERED that during the existence of said
local emergency the powers, functions, and duties of the Director of Emergency Services and the DocuSign Envelope ID: C7CD8845-67CD-4F8F-9BB6-DEC4B72AE2E1
65267.00001\32987834.2 Revised Executive Order No. 2020-5 emergency organization of West Hollywood shall be those prescribed by law, by ordinances, and resolutions of the City of West Hollywood, and approved by the City Council.

SECTION 5. Curfew. A curfew is hereby in effect starting daily at 4 p.m., and ending at sunrise, and during which no person shall be upon the public street, avenue, alley, park, or other public place or unimproved public realty. This curfew shall not apply to the Los Angeles County Sheriff’s department, firefighters, or other emergency personnel or civilians engaged in police or emergency work, nor shall it apply to authorized representatives of any news service, newspaper, or radio or television station or network, or persons travelling to or from work.
SECTION 6. The law enforcement forces of this City, along with the law enforcement authorities cooperating with the City are hereby authorized and charged, to the extent provided by law, with the responsibility of enforcing this curfew and are further authorized to arrest such persons as do not obey this curfew after due notice, oral or written, has been given to said citizen. Any person not abiding by this declaration is guilty of a misdemeanor and subject to punishment in accordance with the West Hollywood Municipal Code Chapter 2.80
SECTION 4. This curfew shall remain in effect until such time as it is terminated by either the Director of Disaster Services or the City Council, or the termination or expiration of the local emergency. The Director of Disaster Services is directed announce the curfew and penalties for violating the curfew on the city’s website and other available messaging options. ORDERED by the City Manager/Director of Emergency Service this 1st day of June, 2020