Dogs of WeHo and their two-legged guardians gathered at West Hollywood Park yesterday for a celebration of World Dog Day 2021. The City of West Hollywood co-sponsored the the fifth annual event hosted by The Vanderpump Dog Foundation.

West Hollywood Mayor Lindsey Horvath and Mayor Pro-Tempore Lauren Meister were joined by council member John Erickson on stage to say some words about the event, speak of their love for dogs and to introduce Lisa Vanderpump.

“Thank you all of you for coming,” Vanderpump told the crowd. “Some of you have been with us from the beginning. We started a Yulin march. We were fighting against the Yulin Dog Meat Festival. We then produced a film ‘The Road to Yulin and Beyond.’ Then we started Vanderpump Dogs with the help from all of our staff and Dr John Sessa. But most importantly, my husband who is always behind the scenes, but he truly has been a motivation. And really thank you all for your love of dogs.” 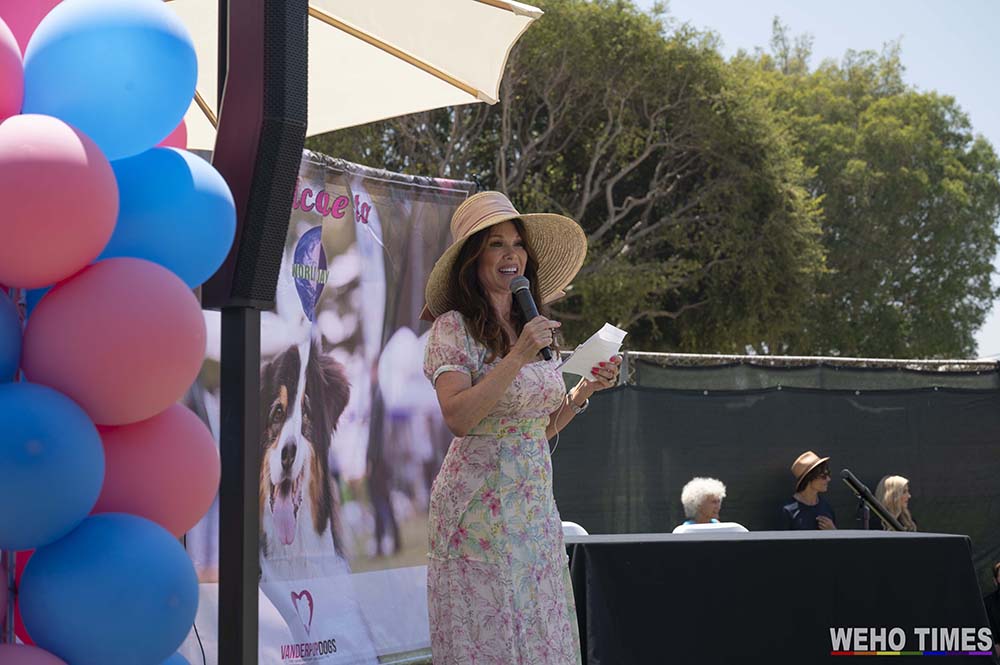 Diana, a four-year old Lab-mix was named Dog of the Year at the event. Vanderpump Dogs rescued Diana after she was hit by a car and left for dead in Mexico. She developed a bone infection from the injuries and there was no choice but to amputate her hind leg. The “tripaw” also had a dislocated hip that required surgery. However, she’s on the mend and is currently looking for a special forever home. Click here to learn more.

The Dog Meat Festival in Yulin, Guangxi Zhuang Autonomous Region, China, begins on June 21 each year. More than 10,000 dogs are reported to be captured, transported in cages, and killed for human consumption every year for this annual event.

In addition, more than 10 million dogs are killed annually in China for the dog meat trade. This festival epitomizes the cruelty of the dog trade industry. Many of the dogs are stolen from their owners. Many die during transport to the slaughterhouse after days or weeks without food or water, and others suffer illness and injury during transport, such as broken bones. In 2016, the City of West Hollywood passed a resolution condemning the Dog Meat Festival in Yulin, China.

The Vanderpump Dog Foundation was formed to aid in ending this international atrocity, and to also better the lives of dogs domestically. The Foundation is built on a platform of education, legislation, and activism. Through the organization’s legislative campaigns, domestic and international awareness, and rescue and rehabilitation efforts, it hopes to end the barbaric torture once and for all.

The first World Dog Day was hosted by The Vanderpump Dog Foundation in 2016 in West Hollywood and following a year in Los Angeles, returned to West Hollywood Park for their 2018 and 2019 events. The 2020 event was cancelled due to public health orders related to gatherings as a result of the coronavirus pandemic.

The City of West Hollywood has a history of supporting measures that promote the protection of animal rights and the City is often recognized as one of the most animal- friendly municipalities in the nation.