The City of West Hollywood responded to accusations made by the City of Compton alleging “rampant” fraud by the Los Angeles County Sheriff’s Department, claiming the agency routinely charges for patrol work that is not being done.

The Los Angeles Times reports allegations were made today, Wednesday, May 26, 2021, in a legal claim filed with the county, which is a precursor to a lawsuit. Compton attorneys say the alleged deception has led to “major understaffing” and “a lack of responsiveness” to calls for service in the city. Compton pays the Sheriff’s Department more than $22 million a year to police the city, and in exchange sheriff’s deputies are obligated to spend a certain amount of time each month patrolling Compton’s streets.

The fraud allegations surfaced earlier this year when a lawyer representing an anonymous deputy assigned to the Sheriff’s Compton station contacted city officials.

According to the report, West Hollywood, which has contracted with the Sheriff’s Department since the city was incorporated in 1984, pays the agency roughly $20 million a year for law enforcement services.

A deputy told The Times that while working at the West Hollywood station, he was asked to fabricate records to show a deputy who was stuck at home because of an injury was out in a patrol car to “burn” minutes.

“I refused,” said a deputy during an interview. The Times states that the deputy asked to remain anonymous out of fear of retaliation. “That’s straight-up fraud. It’s so rampant that it became the norm. At the end of the day, we know it’s stealing, and I’m not a thief.”

The City of West Hollywood has a regular monthly internal review process for its public safety billing in coordination with its local station’s leadership. This review process ensures checks and balances and serves to monitor how the City is billed for Sheriff’s personnel time. The City of West Hollywood looks to the Los Angeles County Board of Supervisors and to Supervisor Sheila Kuehl for a full and transparent process regarding billing discrepancies and misappropriations alleged in the Claim for Damages.

The City Council of the City of West Hollywood will, at its next regular meeting on June 7, 2021, consider adopting a Resolution calling on the Los Angeles County Board of Supervisors and the Inspector General to work with the California Contract Cities Association to audit the billing with Los Angeles County Sheriff’s Department for all contract cities.

The City of West Hollywood refers all press inquiries to the Los Angeles County Sheriff’s Department Headquarters at (323) 526-5541.”

Sheriff Alex Villanueva said the department is conducting a thorough audit during a news conference today.

The Los Angeles Sheriff’s Department has been caught overbilling the City of West Hollywood, so they’ve enlisted local media to help push FALSE CRIME narratives blaming nonwhites (mainly African Americans) and, viciously slandering Public Safety Commissioner Nika Soon-Shiong ‍ for exposing it. In the 80’s and 90’s it was the LASD that joined white supremacists in Gay Bashing in West Hollywood and, now side with the neonazi proud boys & antivaxxers when they come to town to do their harm. YES, our funds would better spent on community-based mental health and homelessness service❗ 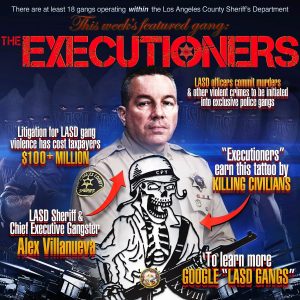 The new city manager has some tough decisions to make…. public safety should be on the top of his priority list. There needs to be an open investigation for all public safety department – LA County Sheriffs Los Angeles county fire Fire and block by block ambassadors. There’s no Sheriffs substation on the east side. They City need to replace The existing Fire station 8, it old and outdated. LA County Fire should take over the vacant building on the corner of Santa Monica and fuller and build a new fire station next to plumber park. Why does McCormick ambulance respond… Read more »

Another embarrassing scandal by our men in brown. How many more scandals before the City of West Hollywood looks into its own police department? The West Hollywood Sheriff’s are crooked.

Thank you for this news. I doubt the other WeHo site will have it for fear of upsetting certain council members they coddle and the sheriffs. I don’t have the evidence to pass judgement but it does seem that they don’t actually patrol the streets, rather they respond to many calls with 10 cars flying east down SMB at top speed. If I needed help I’d want them there this fast but I’m concerned that they will seriously injure or kill someone in the process. You’d only see this type of response in the past for “officer down or needs… Read more »