The City of West Hollywood has implemented an Executive Emergency Order establishing a curfew that goes into effect starting tonight, Saturday, May 30, 2020 at 8 p.m., and ending at sunrise daily.

The curfew order states: “No person shall be upon the public street, avenue, alley, park, or other public place or unimproved public realty.”

This curfew will remain in effect until such time as it is lifted. This curfew is consistent with curfews in the City of Los Angeles and City of Beverly Hills, which neighbor the City of West Hollywood.

WeHo City Manager Paul Arevalo executed the curfew in an effort to keep community members safe during the civil unrest that has been spreading throughout the Greater Los Angeles area in response to the murder of George Floyd Minneapolis at the knee of a police officer who choked him to death.

“The City of West Hollywood supports the right of people to peaceably assemble,” reads a City press release. “Today’s protests across region have taken a turn and there is now a generalized risk to public safety.”

Under the curfew residents should remain at home; hotel guests should remain safely indoors; and businesses should close in time for employees and patrons to be off the streets by 8 p.m. The aim of the curfew is to project public safety, maintain order, and keep community members safe.

The Los Angeles County Sheriff’s Department is monitoring the situation and will provide education and enforcement about the curfew.

Emergency Executive Order 2020-5 is available on the City’s website at www.weho.org/home/showdocument?id=46429.

The City of West Hollywood refers all press inquiries to the Los Angeles County Sheriff’s Department Headquarters at (323) 526-5541.”

The curfew joins neighboring cities like Los Angeles and Beverly Hills in response to four days of protests that have ended in property damage and hundreds of arrests.

“We will always protect free speech and Angelenos’ right to live without fear of violence or vandalism,” said Mayor of Los Angeles Eric Garcetti. “To increase safety for demonstrators, law enforcement and all citizens of Los Angeles, we are putting a curfew in place from 8 p.m. to 5 a.m.” 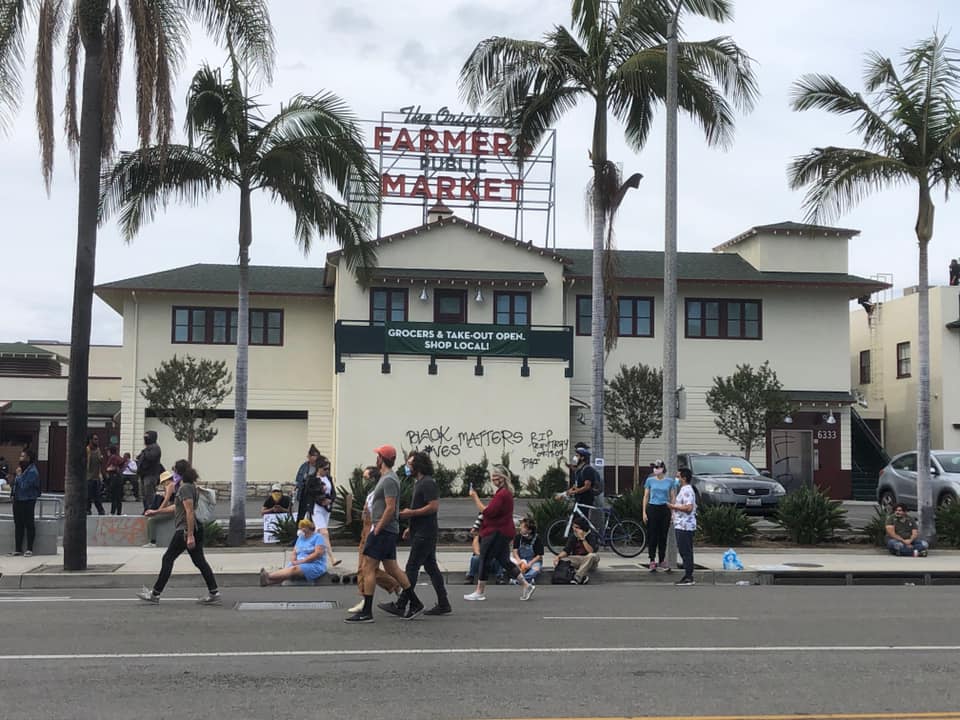 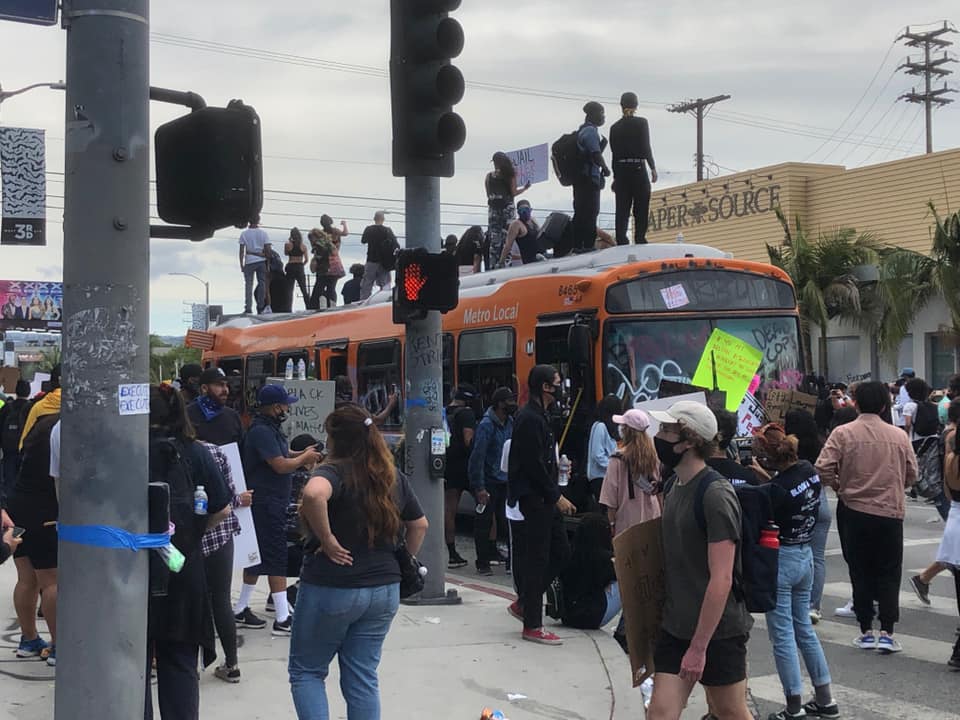 The calls for justice for George Floyd began at around noon the Pan Pacific Park located east of The Grove Shopping  near the Fairfax District. What started out as a peaceful protest turned into chaos where a face-off with police on Fairfax and 3rd, led to destruction of property, multiple police cars were set on fire and according to some reports, police officers fired rubber bullets and tear gas at protestors.

“We’re at the park and the smell of burning plastic is too much and it’s hard to see with all the smoke,” a witness who identified himself as Jeff B. told WEHO TIMES. “You could hear the cans of tear gas exploding like firecrackers. 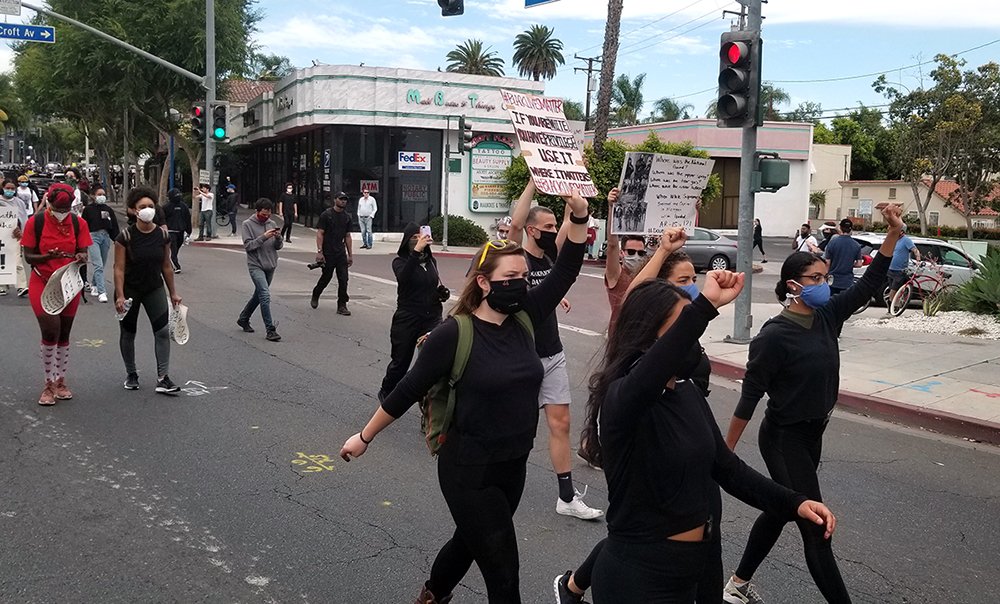 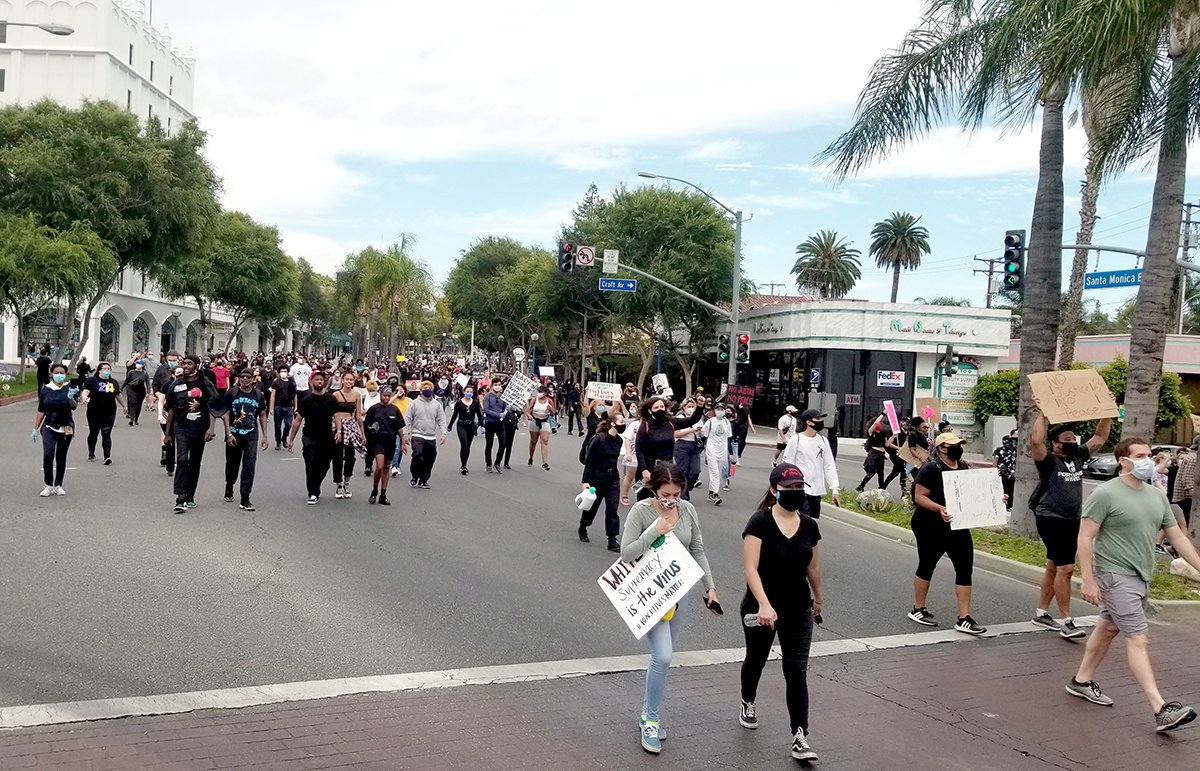 Protesters reached West Hollywood at around 5pm, heading west from Fairfax on Santa Monica Boulevard. Signs on the street read: “Black Lives Matter”, “No Justice, No Peace”, “Stop Killing Us”, “I Can’t Breathe”, and “We Won’t Stop”, to name a few.

Another crowd of protestors came up San Vicente, where protestors faced off with West Hollywood Sheriff’s on the corner of San Vicente and Santa Monica Boulevard in Front of Rocco’s WeHo. Below is footage captured by @lovingweho. The protest was loud, but peaceful.

People are taking to the streets to protest and demand justice for George Floyd, who died Monday after being handcuffed and pinned to the ground by a white Minneapolis Police Department officer, Derek Chauvin. Chauvin pressed his knee on the 46-year-old man’s neck for several minutes while three other officers looked on. The incident was caught on video and spread online. All four officers were fired and Chauvin was charged with third-degree murder and second-degree manslaughter this past Friday.