The City has installed a large-scale public art banner display, Origin Story of Women’s Right to Vote as part of the City’s yearlong celebration of the 19th Amendment centennial. The art installation starts at Crescent Heights Boulevard, to Santa Monica Boulevard and ends around the corner at Havenhurst Drive. The banner timeline begins at the 1848 Seneca Falls Convention and highlights important touchpoints in the suffragist movement through to present day 2020.

The banners will be on display through March 2021, which is Women’s History Month. The project was printed by Lithographix, a printing company that utilizes Lithoxgreen technology and environmentally friendly methods. Lithoxgreen banner materials work as a photocatalyst to absorb UV light that creates a powerful oxidizing hydroxyl radical, which helps remove pollutants from the air and assists the City in its green initiatives and sustainability efforts. 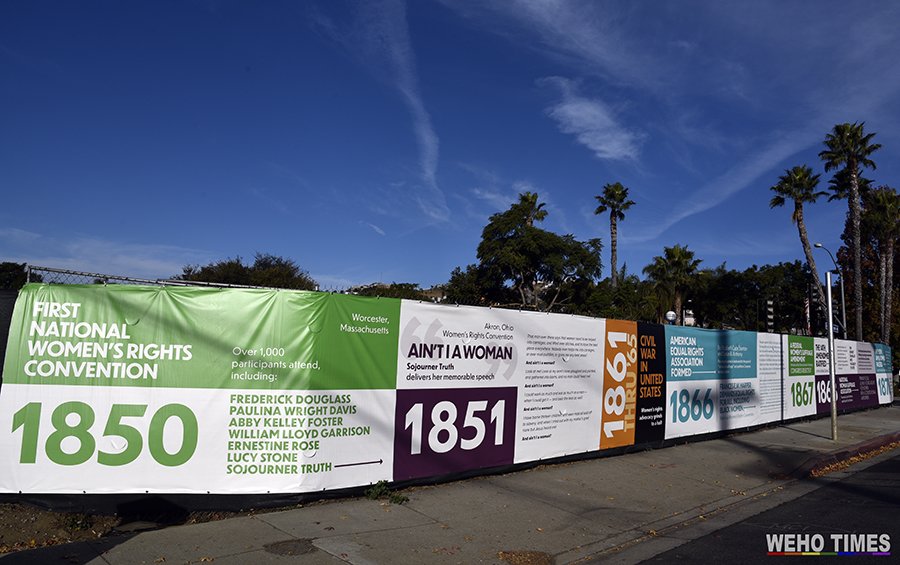 A West Hollywood press release points out how women worked for many decades to win the right to vote, organizing in each state because the U.S. Supreme Court took the phrase “all men are created equal” literally, ruling that protection under the U.S. Constitution did not include women. In response, suffragists began a nationwide campaign and organized the first Women’s Rights Convention in Seneca Falls, New York in 1848. At Seneca Falls “The Declaration of Sentiments” was drafted and an agenda was created for women’s activism for decades to come. It would be more than 70 years later, on August 26, 1920, when three-quarters of state legislatures ratified the 19th Amendment, giving American women full voting rights.

California has a profound connection to the national suffrage campaign. In 1896, women in California lost their first contest for the right to vote. Then, after years of advocacy and lobbying voters throughout the state, more than a decade later on Election Day October 10, 1911, the measure narrowly passed by only 3,587 votes. With the passage of votes for women in California, the number of women with full suffrage in the U.S. doubled, and San Francisco became the most populous city in the world in which women could vote.

Passed by Congress on June 4, 1919 and ratified on August 18, 1920, the 19th Amendment declares, “The right of citizens of the United States to vote shall not be denied or abridged by the United States or by any State on account of sex.”

Although the 19th Amendment was a milestone for women’s equality, millions of women of color still faced significant obstacles to voting. Women of color were prevented from casting ballots for decades because of poll taxes, literacy tests, overt racism, intimidation, and laws that prevented the grandchildren of slaves from voting. After the 19th Amendment was ratified, Native American, Asian American, Latina, and African American suffragists had to continue to fight for their own enfranchisement.

As the City of West Hollywood commemorates the strides that have made in the nation, this project is also a reminder that there is still work to be done. Voter suppression is still a tactic used today to disenfranchise voters. These tactics disproportionately affect women of color, transgender women, and women with disabilities, as well as immigrants, people of low socio-economic status, and the formerly incarcerated. More information is available on the City’s website at www.weho.org/19th.

The Origin Story of Women’s Right to Vote banner installation continues the City’s yearlong celebration of the 19th Amendment centennial, which began in August 2020 with the City’s annual Women’s Leadership Conference focusing on Women’s Equality Day and voting rights issues. That month, West Hollywood City Hall and the lanterns above Santa Monica Boulevard between N. Robertson Boulevard and Hancock Avenue were lighted in the suffragist movement colors of purple, gold, and white in commemoration of the 100th Anniversary of the ratification of the 19th Amendment, which gave women the right to vote, and in honor of the women who fought for their right to vote, equality, and representation.

In addition to programming during the Women’s Leadership Conference, the City of West Hollywood partnered with the National Council of Jewish Women/Los Angeles to host a 19th Amendment Centennial Virtual Celebration featuring a panel discussion highlighting the contributions of African American suffragists. During 2020, the City Council also received presentations from community members and representatives from the Women’s Advisory Board and the Lesbian and Gay Advisory Boards regarding the importance of the 19th Amendment and what voting means to them and their community.