Home News City to Host ‘Hooray for (West) Hollywood’ to Celebrate Its Legacy of... 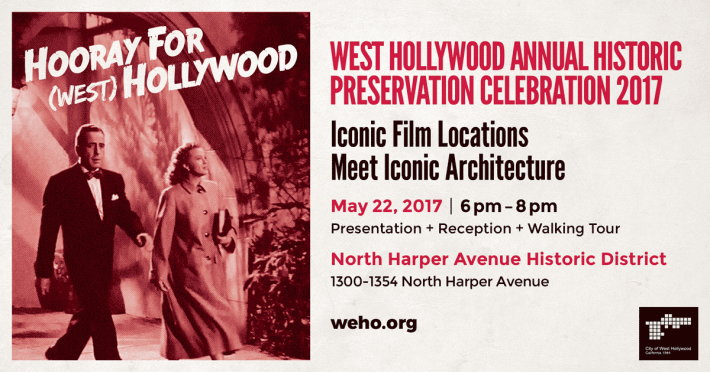 The event will be an outdoor celebration in one of the most iconic locations of historic architecture in the City — the North Harper Avenue Historic District, located at 1300-1354 N. Harper Avenue, between Fountain and De Longpre Avenues.

This year’s event is Hooray for (West) Hollywood with a theme of experiencing the City of West Hollywood through its legacy of iconic architecture and cinema. The celebration will highlight the historic buildings and film locations of N. Harper Avenue, as well as other significant silver screen locations in West Hollywood.

The event will feature a reception with refreshments and presentation of movie clips shot in West Hollywood going back nearly a century. There will be a short walking tour of landmark apartment buildings built in the 1920s by Leland Bryant and by Arthur and Nina Zwebell, during which participants will be treated to a rare peek into a private historic courtyard. Attendees will also have the opportunity to learn about historic preservation efforts in the City of West Hollywood.

Hooray for (West) Hollywood is free to attend and open to the public. RSVPs are requested by contacting Jonathan Kaplan at jkaplan@weho.org. Validated parking will be available at West Hollywood City Hall, located at 8300 Santa Monica Boulevard. The Automated Parking Garage entrance is located on the west side of Sweetzer Avenue, just south of Santa Monica Boulevard. The walk from City Hall to the North Harper Avenue Historic District takes approximately 10 minutes; there will also be a free shuttle service running at 15-minute intervals.

For additional information about Hooray for (West) Hollywood or about historic preservation efforts in the City of West Hollywood, please contact Antonio Castillo, Associate Planner, at (323) 848-6854 or at acastillo@weho.org. For people who are deaf or hearing impaired, please call TTY (323) 848-6496.