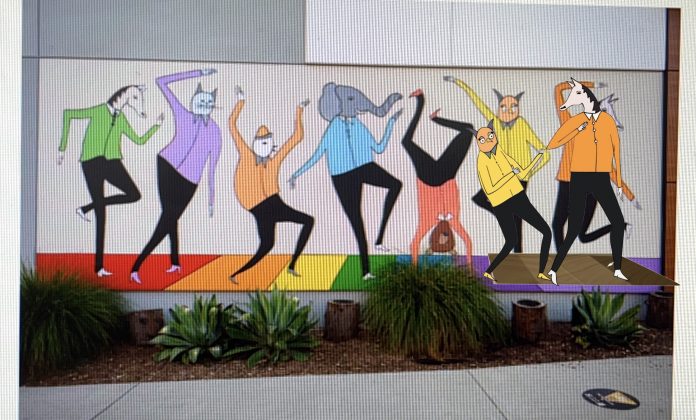 The “You’re All Welcome Here” mural by artist Mike Stilkey, comes to life via an augmented reality (AR) installation by Eyejack app. The mural located at WeHo City Hall, at 8300 Santa Monica Boulevard, will dance via a smartphone through April 2022. The City will replace the mural in May in celebration of LGBTQ+ Pride in West Hollywood. The City’s Arts Division accepted artist’s proposals back in December 2021, for a hand-painted pride mural that will run through May 2023.

Augmented reality (AR) is a technology that superimposes a computer-generated image over a real-world view using a camera on a smartphone. Three unique AR animations designed by Eyejack in consultation with the muralist will come to life through smartphone camera view depending on which group of animals within the painted mural the lens is pointed toward by the viewer.

To experience the augmented reality (AR) installation, the viewer may scan a QR code using a smartphone at the mural location or go to the City’s website by clicking here to download the free Eyejack app. Then, in the open app, viewers can hold their smartphone camera aimed at the artwork (for on-site in-person viewing) or an image of the artwork posted on the City’s website to watch the artwork come to life. The Eyejack augmented reality application brings art to life with animation and sound; Eyejack specializes in the curation and distribution of augmented art such as books, posters, event-based AR, street art, murals, and installations.

The mural You’re All Welcome Here by Mike Stilkey (2019) illustrates the City’s all-inclusive joie de vivre with unique animal characters that dance together exuberantly atop a rainbow crosswalk. Mike Stilkey lives and works in Los Angeles. Anthropomorphism is a strong theme in his work, which has been exhibited throughout the United States as well as internationally.

The augmented reality installation by Eyejack and the You’re All Welcome Here mural are Art on the Outside projects organized by the City of West Hollywood’s Arts Division, part of the City’s Economic Development Department. The Art on the Outside program installs rotating temporary artworks on the City’s medians and in parks. The AR installation is anticipated to be on display through April 2022.