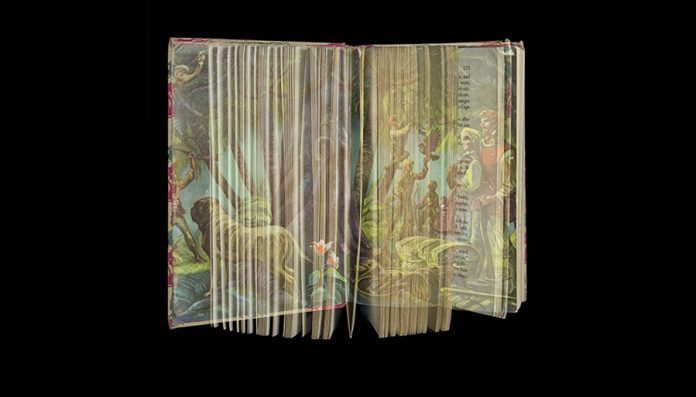 The City of West Hollywood Debuted new art exhibit: Prior Pleasures, by Ellen Cantor. The series will show at the West Hollywood Library, located at 625 N. San Vicente Boulevard, through Sunday, May 7, 2019.

Prior Pleasures is created using a multiple exposure technique (without Photoshop) of end pages, illustrations, and text giving the illusion of a book fluttering open and coming to life for book lovers of all ages. The photographs are accompanied by facts about the books’ authors and original illustrators.

Ellen Cantor was born in Chicago, Illinois and lives in Southern California. She graduated from the University of Illinois and UCLAX Environmental Design Program. Her images are about time, loss, and memory. By photographing and re-contextualizing precious mementos she has sought to understand how life proceeds and then, ultimately, disappears. She documents the artifacts of the past in order to enrich her present.

Her work examines how families archive and pass down memories from generation to generation. This work responds to a universally relatable experience of sifting through the items left behind determining how to incorporate our inheritance. Her work is photographed in the studio to allow her maximum opportunity to explore the mementos that are most precious to her.

This exhibit is organized by the City of West Hollywood’s Arts Division. For more information about arts programming in the City of West Hollywood, visit www.weho.org/arts and follow @wehoarts on social media. Artists whose work has been exhibited in the past at the West Hollywood Library include Don Bachardy, Clive Barker, Jean Cocteau, Henry Diltz, Ramiro Gomez, Robert Landau, Annie Leibowitz, Mr. Brainwash, Elizabeth Orleans, Wayne Shimabukuro, and Pat York.

For more information about this exhibit, please contact Mike Che, the City of West Hollywood’s Arts Coordinator, at (323) 848-6377 or at mche@weho.org.