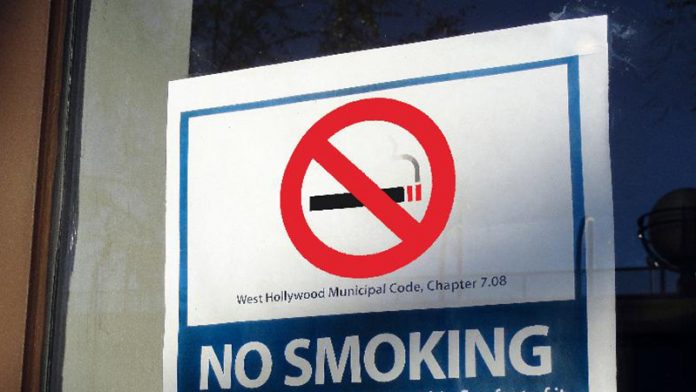 The debate on whether to prohibit the smoking of tobacco, cannabis and vaping inside apartment complexes and at outdoor public areas, came to a head at a regular city council meeting last night, Monday, August 18, 2020. The council voted unanimously to aim for a smoke-free WeHo (tobacco smoke that is) with an unanimous vote to prohibit future tenants from smoking in the privacy of their homes. A 3-2 council vote excludes cannabis and vaping from the proposed ordinance, with council members John Duran, Lauren Meister, and John D’Amico in the majority.

The council agreed smoking tobacco should be prohibited at city parks and parklettes (it is already illegal to smoke cannabis at public spaces). However, there was a discussion about permitting tobacco smoke in common outdoor areas at apartment complexes.

At first council member Meister said smoking should be allowed at outdoor shared spaces as long as the space was large enough to allow tenants space and if smokers were courteous to their neighbors. She didn’t think it was fair to allow smoking at common spaces at hotels, but later in the discussion, she said she understood why the city would ban smoking tobacco in common areas when she made arguments that cannabis should not be included in the ordinance.

“Anything having to do with tobacco products, I don’t want people to be smoking on properties,” D’Amico said. “They can walk down the street, they can walk down the sidewalk and leave the property. Getting 25 feet from an entrance or a window, or a door is going to be pretty difficult to do on a private property in West Hollywood.”

Mayor Pro-Tempore John Heilman agreed with D’Amico and added that all smoking should be banned from common areas. Heilman made comments that he’s subjected to secondhand smoke at his own apartment complex and that people who don’t smoke should have the right to live in a smoke-free environment.

After a long deliberation, council came to an agreement to push the city towards a tobacco free zone with an unanimous vote to draft an ordinance that would move all new future development into banning tobacco smoke for new tenants at apartments and condos.

Community members who were against vaping and smoking cannabis in their apartments were in for a loss with the 3-2 the votes in favor of Option 6 in an updated staff report. Option 6 directs staff to revise the ordinance to prohibit only tobacco smoke; but not cannabis. This could be considered in conjunction with the other regulatory options provided in the staff report.

“Progressive cannabis policy has been ongoing in Weho for decades,” Duran, who voted in favor of a tobacco free ordinance despite his resistance to it, posted on his Facebook timeline. “It started in the rooms of ACT UP in the 1980s. And it reached one of its peaks when 83% of Weho Voters supported Prop 64 to legalize adult sale and use of cannabis in the City. While I understood the arguments of Lindsey Horvath and John Heilman – I could not join them in outlawing cannabis in public areas (under Prop 64) while simultaneously outlawing the use of cannabis in the privacy of one’s home. We heard testimony from persons with cancer, epilepsy, seizures, migraines and AIDS on why cannabis is the medicine that they depend on. And we voted 3-2 to protect cannabis in West Hollywood.”

The ordinance prohibiting smoking for new tenants will go into effect 90 days. City council is expected to finalize language supporting the new ordinance the beginning of 2021.