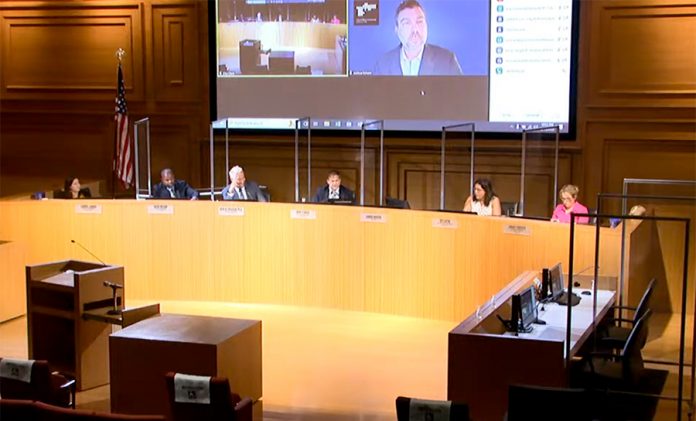 Mayor Lauren Meister recused herself from the discussion because she is defending her council seat at the upcoming election and will be one of the candidates at the forum.

The item was first pulled from the consent calendar for further discussion at a regular West Hollywood City Council meeting on Monday, August 15, 2002, and the council denied the Chamber live, on-demand, and replay coverage on City of West Hollywood’s WeHoTV cable channel and other streaming platforms as part of the November 8, 2022 General Municipal Election. The council voted unanimously no, stating conflicts of interest with the WeHo Chamber.

Council member John Erickson pulled the item from consent, stating that he had questions regarding the Chamber’s involvement with a WeHo PAC and its candidate endorsements. He questioned the value in city dollars to have staff broadcast the forum. “City dollars are going to–in my opinion–a political entity, which is why I pulled this item,” he said.

Council member John D’Amico, questioned if the Chamber forum was the fairest way to get representation from the city. He suggested gathering questions from the community and to have the forum sponsored solely by the League of Women Voters, without the WeHo Chamber. He suggested having independent individuals organize the event and submit questions to Robert Kovicik, of NBC News, who generally moderates the WeHo Chamber forum.

“There have been some very important ideas and efforts in the last couple of years that have seen the Chamber as an organization that has veered away from the city council, depending on where you’re sitting and who you’re looking at…,” said D’Amico.

Council member Lindsey Horvath stressed the importance of having a candidate forum and if the city is participating by offering the service, that they should support it as being fair and impartial as possible, while still providing community input. She suggested community groups, which could include the Chamber submit questions to former LA County Supervisor, Zev Yaroslavsky, who would curate questions that would be provided to the Leave of Women Voters. She said Yaroslavsky is independent and has not endorsed anyone and has a deep connection with the city.

Council member Horvath acknowledged that the relationship between the Chamber and the council is “tense,” and that an email has already been released announcing the candidate forum, so it’s possible the Chamber will continue with the forum regardless of the City’s support.

Mayor Pro-Tem Sepi Shyne said she did not think it was proper, or in good governance for the city to host a political organization, when that organization involved is not independent and has a PAC directly involved with an election. She acknowledged that other cities have policies in place on hosting political town halls involving everything from the number of candidates, the logistics, to who co-hosts the event.

Regarding the motion before the council, Mayor Pro-Tem Shyne said she would not support broadcasting the forum on WeHoTV, stating that it was essentially a partnership with the city. She asked the city attorney to draft a policy regarding political town halls similar to other cities, and that she supports reaching out to League of Women Voters to see if they’ve be willing to do an independent town hall with the city.

Council member Erickson thanked the mayor for recusing herself.

Regarding the Chamber, he added, “It is a very interesting situation with a partisan political organization deeply involved in this election. We’ve all sat at the events where they’ve said, ‘we have to take our city back this next election.’ And those are public dollars that are sponsoring those events where political statements are being made, and I do have a problem with that.”

Mayor Pro-Tem Shyne made a two-part motion to not approve the authorization to live broadcast the West Hollywood Chamber of Commerce City Council Forum on WeHoTV and other streaming platforms, and asked the City Attorney to come back in September with a policy for the Chamber to approve regarding political town halls.

The motion passed unanimously with four votes no.

The Candidates Forum will still take place via Zoom on Tuesday, August 23, from 5:00 pm to 7:00 pm. The Forum will be hosted by the League of Women Voters of Greater Los Angeles and the West Hollywood Chamber of Commerce. Robert Kovacik a NBC 4 news anchor and reporter, will serve as moderator.

The Forum is being planned in partnership with community leaders from 10 neighborhood groups, including:

Three City Council seats will be decided in the upcoming General Municipal Election, which will be held on Tuesday, November 8, 2022. City of West Hollywood Council members each serve for a term of four years and are elected at large. Each year, City Council members select one of their members to serve as Mayor for a year, with the term beginning after the City Council reorganization, which occurs once every year

Thank you wehotimes.com for this detailed report. It may not seem like it, but we appreciate your ability to maintain a poker face on the issues when it would be so easy to pick a side. We also appreciate all the information you provide at the end of this report with the links to the zoom meeting so we can all see what the city council does not want us to see. The Other Guy should take notes and apply them accordingly.

It’s disgusting. We need to get rid of them all..vote them out..except Meister. She’s the only one on the current council that is not dividing us and destroying our city.

It’s painful and embarrassing watching these four West Hollywood city council members claim political purity when they outright do not practice what they preach. Consider all those times Sepi Shyne has taken advantage of city events to invite her favorite council candidates to speak at a podium with the City logo before cameras and news crews to elevate their profile. Consider all those times John Erickson has used publicly televised city council meetings to express his support for Lindsey Horvath’s run for Los Angeles County Supervisor during his Public Comments. He has done it time and time again as recently… Read more »

This is censorship of the worst kind. The council members approved $10,000 for Weho NOW to produce the Transgender Monologues, but they don’t approve this public service for the voters of West Hollywood?

Erickson is the most unethical person I have ever known. It’s silly to hear him accusing the Weho Chamber of Commerce of unethical behavior. He’s been in a long standing one-sided feud with the Chamber and he’s abusing West Hollywood voters in trying to punish the Chamber.

This is not censorship and it has nothing to do with the trans Monologues. WeHo Now does not have a PAC that I’m aware of. I aggree that this is silly and an abuse of power, but it was stated at the meeting that the forum will continue with or without the city’s blessing. Hopefully this move makes everyone want to tune in.