The West Hollywood city council will vote on the future of the OUT on Robertson weekend closure program and provide further direction at a special council meeting meeting on Wednesday, July 21st at 6:00 p.m. The meeting will also be “virtual” (via videoconference).

The City Council will receive an update and evaluation on the Out on Robertson weekend closure pilot program and provide further direction.

The city council will decide on 4 options:

Option 1: Continue Pilot Program for an additional 3 months
This option would continue the pilot for an additional 3 months without modifications to hours or operations. If Council selects this alternative, staff anticipates that interest from City businesses would remain at its current level. Similarly, current traffic patterns would likely remain. The estimated cost of weekly operations for Option 1 are outlined in the table below; the estimated costs do not account for paid programming or entertainment. If Option 1 is selected, staff would return to City Council at its meeting on October 18, 2021, with another evaluation.

Option 2: Continue OUT on Robertson weekend closure as a part of the work plan, which will be evaluated annually. This option would conclude the OoR Pilot Program and continue OUT on Robertson as a part of the regular work plan, where it would be evaluated annually. If the Council elects this option, operations will continue as they have during the pilot for the next 3 months, at which point, staff will return to Council with a detailed report related to the cost of transitioning this program to a permanent work plan item. This report will also propose a permanent implementation plan, which may include revisions to operations, staffing or infrastructure, as the current implementation was designed to meet a temporary need.

Option 3: Allow Live Entertainment as part of Pilot Program
This option would direct staff to return with an ordinance to allow Live Entertainment only during the times that the street is closed, between the hours of 11:00 a.m. and 10:00 p.m., should the pilot program continue as described in Option 1 or Option 2.

Option 4: Conclude Pilot Program
This option would conclude the pilot program as of the weekend of July 17-18, 2021.

The meeting may be live-streamed by visiting the City’s website at www.weho.org/wehotv. The City Council meeting will also available on the City’s YouTube channel, and on streaming services such as AndroidTV, AppleTV, FireTV, and Roku. It is broadcast on Spectrum channel 10 in West Hollywood and AT&T U-verse channel 99 throughout Southern California. Digital streaming platform viewers can easily find programming by searching for “WeHoTV” within the search functions of these services.

On February 16, 2021, the City Council directed staff to implement a vehicular closure of
Robertson Boulevard south of Santa Monica Boulevard as a pilot program to activate the street for pedestrians, bicyclists, outdoor dining, and other activities from 6pm on Saturdays to 2am on Mondays with the intent to provide additional community space along Robertson Boulevard during weekends, while allowing it to remain accessible to regular vehicular traffic during the week. The direction also included a staff update and evaluation of the program to the City Council three months after implementation.

The pilot program, now known as “OUT on Robertson”, soft-launched on the weekends of April 17-18 and April 25-26, 2021. The grand opening of OUT on Robertson (OoR) took place the weekend of May 1-2, 2021, and has continued each weekend through the time of this report.

At the April 19, 2021, City Council meeting, the City Council waived fees associated with temporary peddler’s permit (merchandise and food) for businesses that would be participating in OUT on Robertson. 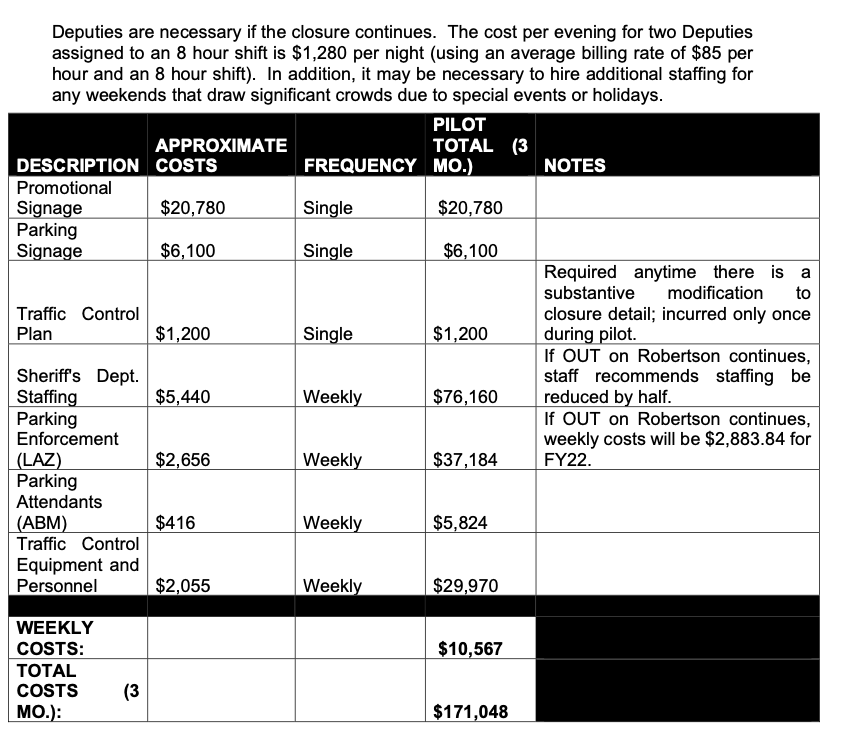 Members of the public who wish to comment before the City Council on the Out on Robertson weekend closure, or any other item, may do so in several ways:

TO PARTICIPATE BY PROVIDING AN E-COMMENT: Members of the public who wish to comment on matters before the City Council are strongly encouraged to visit www.weho.org/councilagendas and submit an E-Comment by no later than 4:00 pm on the day of the Council meeting. *Note: E-Comments received by 4:00 pm will be forwarded to the City Council and posted on the City’s website as part of the official meeting record.

TO PARTICIPATE BY PHONE: You are strongly encouraged to emailmcrowder@weho.org by no later than 4:00 pm on the day of the Council meeting to be added to the Public Speaker List for the meeting. Please include your name, the phone number from which you will be calling, and which item you would like to speak on. Dial-in 10 minutes prior to the start of the meeting (the meeting begins at 5:30 pm) Dial-in: (669) 900-6833 Meeting ID for July 19th meeting: 956 8680 4373, then #. Meeting ID for July 21st meeting: 965 0367 8634, then #. PLEASE MUTE YOUR PHONE UNTIL YOU ARE CALLED TO SPEAK. Comments from the public are limited to 2 minutes per speaker.

There is no good reason to keep Robertson closed all weekend. It’s been a total failure and has benefited only one business..the Abbey. It’s cost the taxpayers dearly ($$) and the residential communities surrounding the closure all oppose it. And the businesses on Robertson were always against it.