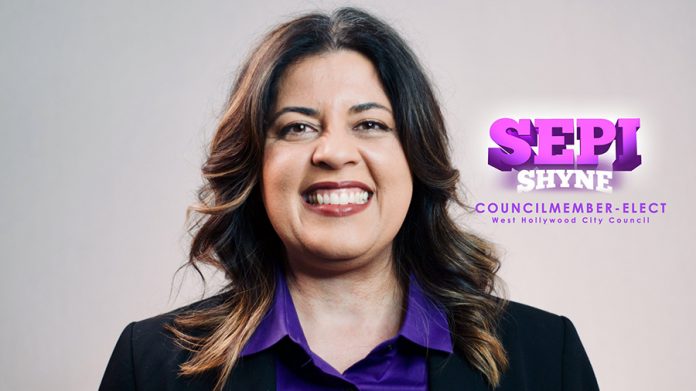 Shyne tells WEHO TIMES the Facebook event is more of a community event celebration following the official City swearing-in ceremony. She says there will be guest speakers and much more at the swear-in celebration on December 10th.

The City of West Hollywood’s General Municipal Election was held on Tuesday, November 3, 2020. Operations for Vote Centers, voting, and counting are still being conducted by the Los Angeles County Registrar-Recorder/County Clerk.

The unofficial election results indicate that candidates Sepi Shyne and John Erickson have secured the top number of votes by West Hollywood voters for two seats on the City Council of the City of West Hollywood. The most current elections numbers updated on November 10, 2020, 4:01:21 p.m., show Sepi Shyne has secured 7,927 votes and John Erickson has secured 7,188 votes. The candidate with the next highest number of votes is incumbent John Heilman with 6,108 votes.

“Thank you to my wife, my team, all our supporters and our volunteers for helping us make history!” Shyne stated in a pinned post on her Facebook timeline. “I am incredibly proud of the success of our people-powered campaign. We laid out a broad and progressive vision that protects renters, rejects special interests, and reimagines how we invest in our quality of life in West Hollywood. I am grateful to everyone who placed their trust in me, and I look forward to earning the trust of those who didn’t vote for me. Together, we will move our city forward and ensure that West Hollywood remains the gem it has always been.”

The Councilwoman-elect is an activist and lawyer who mades history as the first openly LGBTQ Iranian woman to hold office in the world.

There are 29,523 registered voters in the City of West Hollywood. The Los Angeles County Registrar-Recorder/County Clerk’s office must still count same-day registration ballots, provisional ballots, and Vote-by-Mail ballots received on Election Day. Final election results are scheduled to be certified by the Los Angeles County Registrar-Recorder/County Clerk on Monday, November 30, 2020.