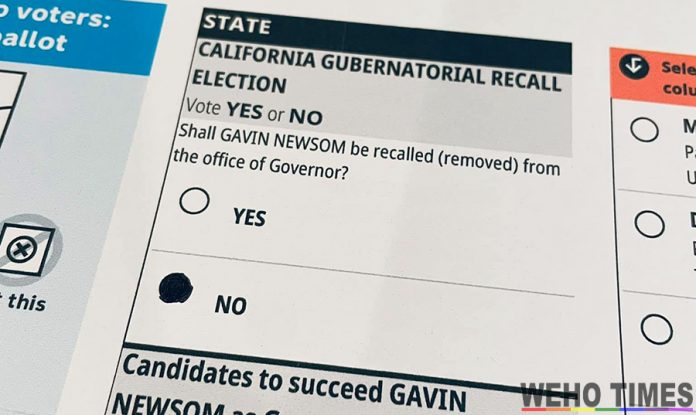 The City of West Hollywood adopted a resolution opposing the recall of California Governor Gavin Newsom at last night’s regular City Council meeting. Item 2R in the agenda, initiated by Mayor Lindsay Horvath, was moved to consent. The resolution opposes question 1 in the ballot asking to recall the Governor.

Councilmember John D’Amico asked the City Clerk to register his vote as a no on 2R on the grounds that he felt it was not democratic to not be in favor of a recall election. He said the election was part of the constitution.

“That’s a resolution and an oppositon of a recall of the governor,” he said at the virtual meeting. “I’m certainly not in favor of this recall election, but it is a process. It does exist in our constitution and I have to vote no on this because I just can’t really believe that I can support something that’s towards democracy. It’s not the kind of democracy I like. I have already decided of course, I think most of us in this city are planning to vote, but this is a resolution of an opposition of a recall election. A recall election is actually part of our constitution. It’s part of our city’s ordinances and I think the bigger picture is a better idea. Support democracy no matter where it takes us, rather than only support the parts of democracy that we like, so if the City Clerk would register my no vote on 2R.”

“Item 2R as noted in the report is precisely because I support democracy and I believe our community does too that I brought forth this item and I thank my colleagues for recommending and their vote on moving it to consent tonight,” Mayor Horvath responded. “We’re not discouraging anyone from voting. Quite the opposite. In fact our City Clerk has updated our city website and provided a lot of information on the gubernatorial recall election. We’ll have quite a depressed voter turnout if we don’t all turnout and participate in voting.”

“The recall ballot will ask two questions. The item before us tonight only takes action on one, whether we want to recall Governor Gavin Newsom,” she added. “The second question is if the Governor is recalled, who do you want to replace him. The city is not taking action on that item, but I would say that in light of the issue around democracy, less than 50 percent of the voters who turnout in a very depressed election next month will decide who the governor is, as opposed to many more people who have participated democratically in electing the governor for our state. We’ll have the chance to vote on a governor next June at a regularly scheduled election to decide whether to make a change in that office. I think, unfortunately we’ve seen a great expenditure of resources on an election where those dollars could’ve been used in so many other ways as we are facing concurrent crisis of homelessness, COVID-19, and so many other things. For those who have not yet turned in their ballots, vote by mail ballots have been mailed to all registered voters. They will drop throughout L.A. county. Our last day to register to vote is August 30th.”

Organizers of the current recall movement say there are a list of reasons Californians signed their petitions: frustration over Newsom’s handling of the pandemic and business restrictions, worsening housing and homelessness crises, and high taxes and cost of living are on a long list of reasons.

California’s Gubernatorial Recall Election is on Tuesday, September 14th. According to a West Hollywood City Staff report, the California Department of Finance estimates the recall election will cost state and county election officials $276 million to administer. The costs are much higher than previous recall elections because every voter in the state will receive a vote- by-mail ballot, as well as options to vote in-person.

California approved recalls back in 1911. 179 attempts have been made against state officeholders, and every governor since 1960 has faced as least one. Recall elections have become highly politicized and rather than serving to remove someone who is unfit for office, recalls have been a tool to undermine the will of the people and remove someone from office who was fairly elected by a majority of the voters.

The ballot will have two questions:
1. Should the elected official be removed from office?
2. If the official is removed, who should take their place?

If more than 50% of voters answer “yes” to the first question on the recall ballot, the candidate who wins the most votes in the second question will become governor. This means if a majority of California voters want to recall the governor, he will be removed from office and replaced with someone who will likely receive less than 50% of the vote. This process undermines our democracy and perpetuates a dangerous precedent of electing a governor with potentially a small percentage of the vote.

The next regularly scheduled gubernatorial election in California will take place on June 7 (primary) and November 8 (general) in 2022. The fiscally responsible and democratically appropriate course of action would have been for the governor’s opponents to wait for the 2022 election cycle to vote for an alternative candidate.

The last California gubernatorial recall to reach an election was in 2003. On September 15, 2003, the City Council passed a similar resolution in opposition to the recall election. At the time, the City Council believed the recall established a dangerous precedent for eroding the electoral process. The Council also argued the $67 million on the special election could have been better spent on education, healthcare, and public safety.

I stand with Gov. Newsom. There is nothing Democratic about this recall. This is a coup. Any of the would be contenders can be elected with only 20% of the vote.
This is a Republican take over that is costing California residents $276 million dollars. Further damaging the state of CA. Pathetic.