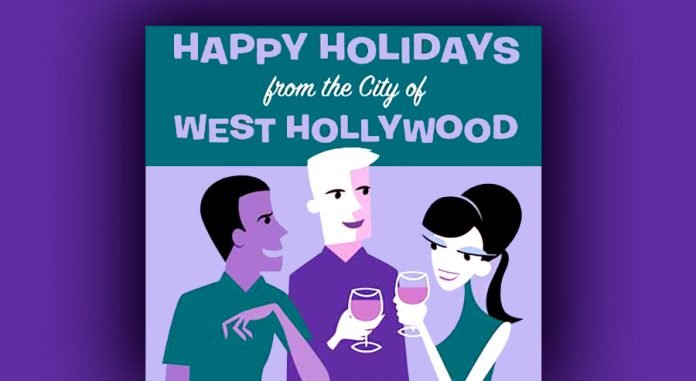 The City of West Hollywood is celebrating the holiday season with special WeHo Holiday programming throughout the month of December. The streets will be decorative with holiday pole banners, and City Hall is issuing a commemorative holiday card featuring original artwork donated by Shag (artist Josh Agle). There is also a poem specifically written for the holiday season by West Hollywood City Poet Laureate Charles Flowers.

City of West Hollywood’s Winter Sounds Concert Series: California String Quartet — Saturday, December 8 from 5 p.m. to 6:30 p.m.
The City of West Hollywood’s Arts Division and the West Hollywood Library present the 2018‐19 Winter Sounds free indoor concert series. The debut concert of the season features the California String Quartet who will perform its Holiday Classical Chamber Music concert. This concert will honor and celebrate the memory of violinist and concertmaster Katia Popov. Admission is free and seating is on a first-come, first-served basis. For more information, music samples, and parking information, visit www.weho.org/wintersounds.

New Year’s Musical Celebration, and Masquerade Ball: “Homage to Vienna” — Saturday, December 15 at 6 p.m.
Join the City of West Hollywood and its Russian Advisory Board for a new year’s musical celebration and masquerade ball, An Homage to Vienna, which will feature the music of Strauss, Offenbach, Lehar, Chopin, and Puccini. Participants are encouraged to wear masquerade costumes or evening attire. General admission is $30 and admission for seniors and students is $20. For more information, contact Tatiana Rodzinek at (323) 848-6826 or at trodzinek@weho.org.

Puppet Theatre on Wheels: The New Adventures of Goldilocks and the Three Bears — Sunday, December 16 at 11 a.m. in Russian, 12:15 p.m.
Everyone knows Goldilocks, right? But what happened after she ran back home? In this original story by Puppet Theater on Wheels, she decides to spend the winter holidays with the bear family, and at the end everyone sees Grandfather Frost and Snegurochka! These puppet shows highlight aspects of Eastern European culture and are geared towards children and parents. A Russian language performance at 11 a.m. will be followed by an English language performance at 12:15 p.m. Admission is free. This performance is supported by the City of West Hollywood’s Arts Division.

Holiday Musical Performance for Children of All Ages — Thursday, December 20 from 5 p.m. to 7 p.m.
Join the City of West Hollywood as Happy Notes School presents a free holiday musical performance for children of all ages. The program will feature students from Happy Notes School and Santa Claus. Festivities include games, singing, and dancing around the Christmas tree. Admission is free. For more information, visit the Happy Notes Facebook event page. This event is presented with the support of the City of West Hollywood’s Arts Division.

Calling Children of All Ages! Drag Queen Story Hour — Saturday,
December 22 at 11 a.m.
Start Saturday morning off on the right uh… high heel, with our fun and fabulous Drag Queen Story Hour. Children are invited to bring their parents and guardians and join the City of West Hollywood at the West Hollywood Library for Drag Queen Story Hour, which is exactly what it sounds like: glittering, magical drag queens capturing the imagination, playfulness, and gender fluidity of childhood, while giving kids glamorous, positive, and unabashedly queer role models. At Drag Queen Story Hour, children are able to see people who defy rigid gender restrictions and imagine a world where people present as they wish — a world where dress up is real. For children of all ages. No registration necessary. Admission is free. Co‐sponsored by the City of West Hollywood’s Arts Division. For more information, please visit www.colapublib.org/libs/whollywood.

Interactive Winter Christmas Show — Saturday, December 29 at
11 a.m., 5 p.m., and 6 p.m.
Join the City of West Hollywood and its Russian Advisory Board as Gorozhanka presents an interactive Winter Christmas Show. Don’t forget to get your picture taken with Father Frost and Snow Maiden. Admission is $35 per child (includes gift); $20 per adult. For more information and to purchase tickets, visit Gorozhanka online at its event page or call (818) 210-6399.

The City of West Hollywood’s decorative street pole banners and holiday card includes original artwork created by, and generously donated by Shag (artist Josh Agle). It also includes the original poem “Feast for the New Year/Bringing the Feast” written by West Hollywood City Poet Laureate Charles Flowers specifically for the holiday card. The poem and digital card are available at https://www.weho.org/community/2018-holiday-programming. Hard copies of the card are available at City Hall, the West Hollywood Library, and Plummer Park. Street pole banners featuring the holiday artwork may be seen on Santa Monica Boulevard and Melrose Avenue in West Hollywood.

In addition to holiday programming, the City of West Hollywood will also be conducting its annual toy and food drive.

28th Annual West Hollywood Toy and Food Drive
The City of West Hollywood and the West Hollywood Sheriff’s Station are partnering to help give back to people in need this holiday season. The 28th Annual West Hollywood Toy and Food Drive will be accepting donations until Friday, December 21, 2018 with the goal of providing up to 900 families with meals and gifts. For the past three decades, the generous contributions of local businesses and individuals have helped provide more than 7,300 local families with food and gifts in the spirit of the holiday season. The West Hollywood Toy and Food Drive provides families in our community with a holiday meal — as well as two toys for every child in the family. The cost to help one family is $65; this can go up to helping as many as ten families for $575. New unwrapped toys are also needed, as well as new clothing, store coupons, and discount cards. For more information on the Toy Drive please contact Bonnie Smith at bsmith@weho.org. Visit www.weho.org/holidaydrive to donate online. Monetary donations can be made at the cashier’s window at West Hollywood City Hall, located at 8300 Santa Monica Boulevard.

For more information about the WeHo holiday card or about the City of West Hollywood’s Arts Division, please visit www.weho.org/arts or contact Mike Che at (323) 848-6377 or at mche@weho.org.