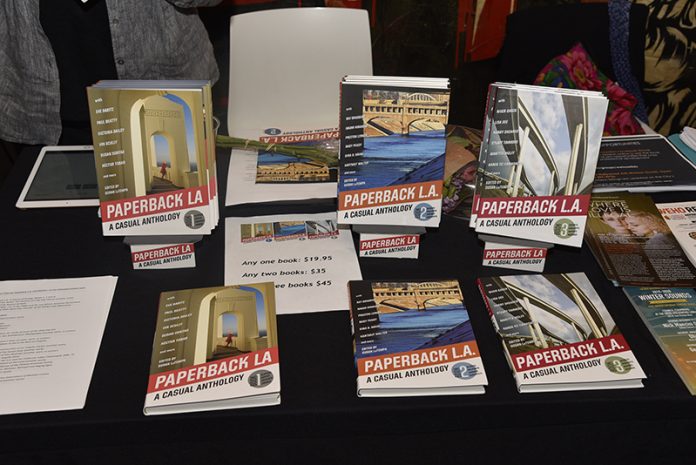 On October 1, 2011, the West Hollywood Library first opened to the public. The 32,000-square-foot, LEED-certified library, owned by the City of West Hollywood and operated by the County of Los Angeles Public Library, showcases the City’s rich intellectual, literary, and cultural communities and provides a landmark facility for the community’s passionate commitment to lifelong learning. The library includes shelving for 150,000 books, movies, and music as well as wireless internet, reading lounges, group study rooms, a children’s theater, a teen area, an LGBT area, international language collections, assistive technology and large print collections, computer and technology areas, a career development center, the Friends of the Library Bookstore, and more.

Paperback LA authors in attendance at the event included:

Eric Gutierrez, author of Disciples of the Street: God & Rap in the Holy Land of Hip Hop, profiled on The Tavis Smiley Show, and co-editor of Suave: The Latin Male. His fiction appears in the Lambda Award-winning anthology The Man I Might Become, among many others, and his journalism and commentary in the Los Angeles Times, Jerusalem Post, The Times (UK), thedailybeast.com, and huffingtonpost.com;

Jason Jenn, interdisciplinary multimedia artist, performer, writer, visual artist, director, producer, designer, and video editor. He will be representing the late Stuart Timmons, whose work is featured in the anthology. In 2014, Jason teamed up with Stuart Timmons to help complete the Stuart Timmons’ City of West Hollywood LGBTQ History Tour as both a text and for three years as a live performance art event for the City of West Hollywood’s 30th Anniversary celebration / 2014-17 One City One Pride LGBTQ Arts Festival (www.weho.org/pride);

Gina Nahai, best-selling author, columnist, and emeritus professor of Creative Writing at USC. Her novels, which include Moonlight on the Avenue of Faith (excerpted in Paperback L.A. Book 2), have been translated into 18 languages and have been finalists for the Orange Award, the IMPAC Award, the Harold J. Ribalow Award, and the Jewish Book Council’s Fiction Award. She is the winner of the Los Angeles Arts Council Award, the Persian Heritage Foundation’s Award, The Simon Rockower Award, and the Phi Kappa Phi Award;

R.J. Smith, whose books include American Witness: The Art and Life of Robert Frank (2017), The One: The Life and Music of James Brown (2012), and The Great Black Way: L.A. in the 1940s and the Lost African-American Renaissance (2009), which was a Los Angeles Times bestseller and received a California Book Award. He has been a senior editor at Los Angeles magazine, a columnist for The Village Voice, and a staff writer for Spin magazine; and