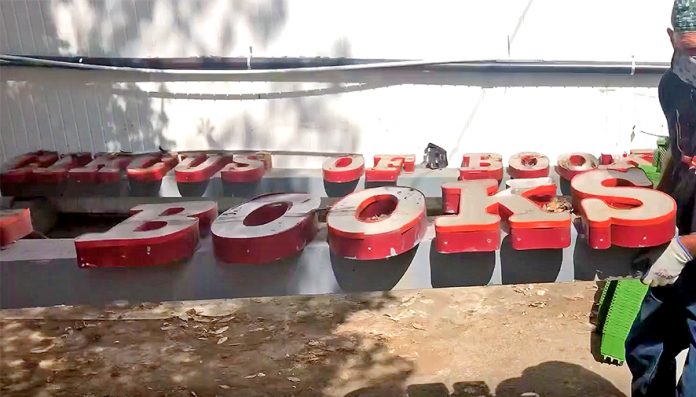 The Museum of Neon Art (MONA) recently acquired two historical Circus of Books neon signs that will be restored and on exhibit at MONA, located at 216 S. Brand Blvd. Glendale, California, when the museum is safe to re-open (the museum is currently closed to the public until further notice in compliance with efforts to contain the spread of COVID-19).

The neon signs were part of the Circus of Books adult book and retail stores established in 1982 by Karen and Barry Mason. Circus of Books operated in West Hollywood and Silverlake for or decades. The neon sign symbolized a safe space for gay men and the store was a gathering place, a cruising spot, and resource to the community.

“The original sign was a backlit sign with some acrylic or plastic with ‘Book Circus’ and when we took over the store, I knew people had referred to the store as just ‘Circus’,'” said former Circus of Books owner Barry Mason. “they would say, ‘oh let’s go over to Circus,’ so I wanted to keep the ‘Circus’ part, and when I saw the sign, I realized I could just saw the sign in half and flip it and add the word ‘of’ and put it back up.”

“This sign may not look like much, but it really means a lot to the gay community,” said says J. Eric Lynxwiler, President of MONA’s Board of Trustees, when he picked up the sign in Silverlake. “I think it’s a LGBTQ-friendly business that was born of West Hollywood and here in Silverlake. It’s a treasure. I’m really glad that it wasn’t lost, because it just has a lot of meaning for a lot of people. And I think for that reason alone, it’s worth saving. It’s beautiful. To me.” 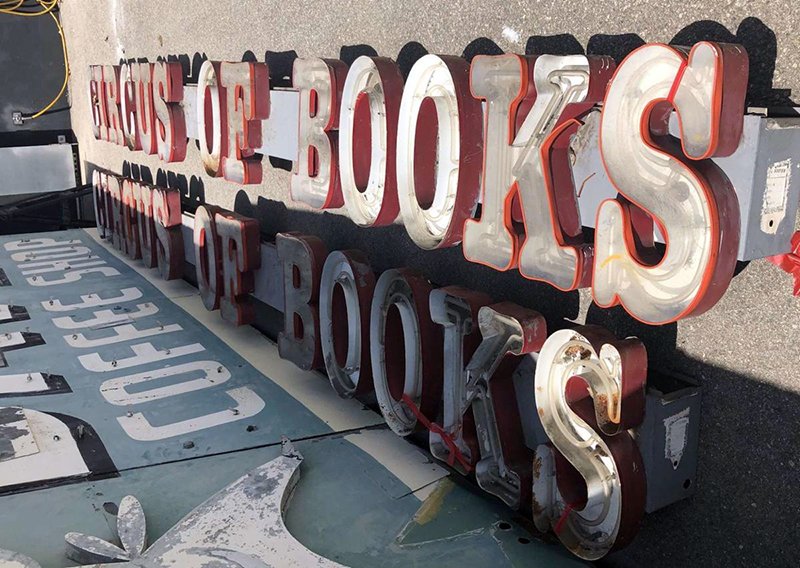 Lynswiller says The Museum of Neon Art has saved numerous signs from across Los Angeles, yet the Circus of Books neon sign is the first piece in what he hopes is a growing collection of neon signs representing LGBTQ culture and history. “The Circus of Books neon sign is important to many, not just because of recent memory, but because of the bookstore’s place as a safe haven for many generations of the LGBTQ community.”

“The story of neon is often seen as synonymous with Americana,” said MONA Executive Director, Corrie Siegel. “At MONA, we are proud to preserve and showcase a diversity of signage and neon art that demonstrates that the story of America is complex, diverse, and multi-layered. We believe history can’t be told without mom-and-pop businesses, immigrant narratives, and stories of businesses that hid in plain sight, while glowing as a beacon to those on the margins. Circus of Books is a sign that bears testament to hidden narratives of individuals forced to exist in the shadows, and the businesspeople who put themselves at risk to provide services to them.”

In April 2020, a documentary called “Circus of Books” by artist, filmmaker, and daughter of
the business owners, Rachel Mason, was released on Netflix. It has broadened the attention for the store worldwide from Iran to Indonesia, as well as deepened understanding of a community struggle for First Amendment and Gay Rights through a family story. “I’m honored that the Museum chose the Circus of Books sign to represent one of the many important queer businesses that make up the foundation of Los Angeles history,” she said.

The Masons donated the Circus of Books neon signs. The museum is in the process of collecting funds to restore and relight the signs.

To learn more, or to make a donation, visit: https://www.neonmona.org/.