CicLavia Street Event in the Works to Return to West Hollywood 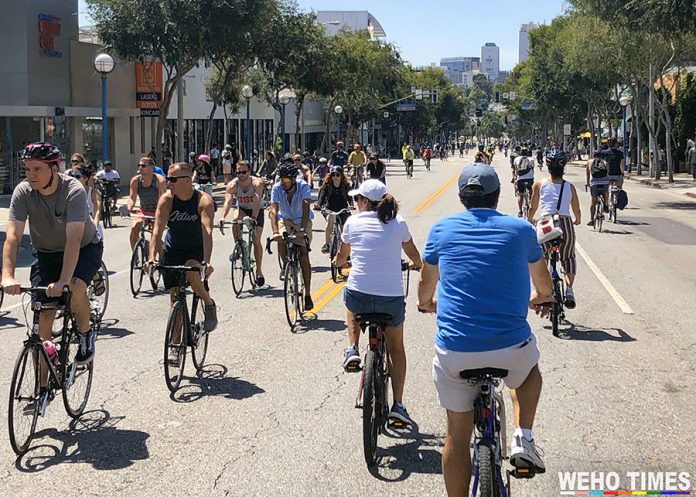 CicLAvia is a free event that connects communities to each other across neighborhood and jurisdictional boundaries, creating a safe place to bike, walk, skate, roll and dance through the Los Angeles region on open streets, closed to car traffic. The CicLAvia street event is a nonprofit organization that started as a grassroots initiative in 2008. Since the first event in 2010, over 1.8 million people have experienced CicLAvia across 226 miles of roadway, making it the largest open streets event in the United States. CicLAvia catalyzes vibrant public spaces, active transportation, and good health through car-free street events.

The City of West Hollywood held its first CicLAvia street event in August 2019 in partnership with the City of Los Angeles. CicLAvia: Meet the Hollywoods opened 6.5 miles of roadway to residents and visitors who explored the car-free streets. The event was held on a Sunday from 9 a.m. to 4 p.m. Santa Monica Boulevard was closed between 6 a.m. and 6 p.m. The route extended from Hollywood Boulevard and Vermont at the eastern end to Santa Monica Boulevard and San Vicente on the west. The 2019 event route is provided as Attachment A.

CicLAvia worked closely with businesses to ensure the impacts on their daily operations were mitigated as much as possible. Meet the Hollywoods was a great success with an estimated 35,000 people in attendance. Most of these were cyclists or other wheeled participants, but there were also over 10,000 pedestrians in attendance. During the event, the community was engaged as participants, as business owners, as observers and it brought together thousands of people along one of the City’s main corridors.

In August 2021, the City Council gave direction to staff to work with organizers of CicLAvia to develop plans to co-host a future event with the cities of Los Angeles and Beverly Hills and to apply for open streets program funding through Metro to fund a potential event. The City of West Hollywood submitted a joint application to Metro with Beverly Hills and Los Angeles for $500,000 to help fund the event. Metro did not select this application to be funded.

CicLAvia and Los Angeles are still interested in moving forward with an event for August 2022. The proposed route would be similar to the route of the previous 2019 event, which connects West Hollywood and Los Angeles including some of LA’s most iconic commercial boulevards: Santa Monica, Highland, and Hollywood, where participants can experience these historic streets in a car-free environment. During the event, streets will be closed to cars and open for cyclists, pedestrians, runners, skaters, and scooters to use as a recreational space. The street closure will extend on Santa Monica Boulevard from San Vicente Boulevard through La Brea Avenue in West Hollywood. There are currently West Hollywood crossings proposed at San Vicente, La Cienega, Crescent Heights, Fairfax, and La Brea and hubs proposed at Robertson and Plummer Park.

Staff estimates the total cost to the City of West Hollywood – including the costs for the CicLAvia fee and city services – will be between $350,000 and $400,000.

CicLAvia will be the lead organizer of this event and will be primarily responsible for event planning and production. They charge a route production fee to cover pre-event planning, event day logistics, outreach, and staff support. The estimated route production fee for the City of West Hollywood is $75,000, plus costs for hub infrastructure. This estimate is based on a 40/60 split of the costs between the City of West Hollywood and the City of Los Angeles because roughly 40 percent of the route length and hubs are in West Hollywood and the other 60 percent are in Los Angeles. If directed, City staff will enter into an Agreement for Services with CicLAvia. The City of Los Angeles also plans to enter into a separate agreement with CicLAvia to cover their portion of the fees.

In addition to the CicLAvia fee, each of the cities will need to budget separately for city services expenses. A list of the potential city services is included as Attachment B. Based on the event held in 2019, City staff estimates the cost for City services will be approximately $250,000 to $300,000. The October 21, 2019 staff report on the CicLAvia Open Streets Summary is provided as Attachment C and provides a breakdown of the budgeted and actual costs for the previous event, which can be used as a guide for the projected costs in 2022.

Measure M is a fund for projects to support transportation programs and projects. The City receives a certain amount of funding each year in Measure M dollars that can be used to support local projects. Staff anticipates the complete cost of the CicLAvia street event can be paid using Measure M funds. If for some reason additional funding is necessary, the City will use unallocated General Fund reserves.

Can’t wait. I’ve been to many Ciclavias to explore parts of the city I’d never been to before. And I’ve returned to those same area multiple times over to shop and dine solely because I experienced the areas thru Ciclavia events.

From the Ciclavia web page:
The benefits to air quality are staggering: Harmful air pollution (PM 2.5) was reduced by nearly 50% on CicLAvia day along the route — compared to non-CicLAvia days

So we’re kind of paying then to close down the city for an entire day…this after the city has basically been closed for business for for the last two years.

I would really like to see the R.O.I in relation to how it benefits or hurts all of our businesses.

Do the financial statements from the previous event that were mentioned address this.

How do the business owners residents feel about the event?

Are there alternative city issues where these funds could be better allocated like battling crime, homelessness, grants to start new businesses.