Christopher Street West (CSW), the 501(c)3 nonprofit that produces the annual LA Pride Parade and Festival in the City of West Hollywood announced today that it will host an assembly of sorts with a Solidarity Protest March to show support for the protestors who are marching against racial injustice, systematic racism, and all forms of oppression. The Solidarity March is scheduled for June 14, 2020 at 10am at Hollywood and Highland.

CSW had previously cancelled all in-person events due to COVID-19, but the CSW Board of Directors voted on the evening of June 1, to peacefully assemble a protest in solidarity with the Black community at Hollywood Blvd. and Highland Ave. in Los Angeles, near the site where the first ever permitted Pride Parade took place. The protesters will march to West Hollywood and end at the intersection of San Vicente and Santa Monica Blvds.

“Fifty years ago Christopher Street West took to the streets of Hollywood Blvd in order to peacefully protest against police brutality and oppression,” said Estevan Montemayor, President of CSW Board of Directors. “It is our moral imperative to honor the legacy of Marsha P. Johnson and Sylvia Rivera, who bravely led the Stonewall uprising, by standing in solidarity with the Black community against systemic racism and joining the fight for meaningful and long-lasting reform.”

The California Department of Public Health recommends that participants engaging in the march should wear face coverings at all times.

CSW sent the following flyer to promote the Solidarity March. 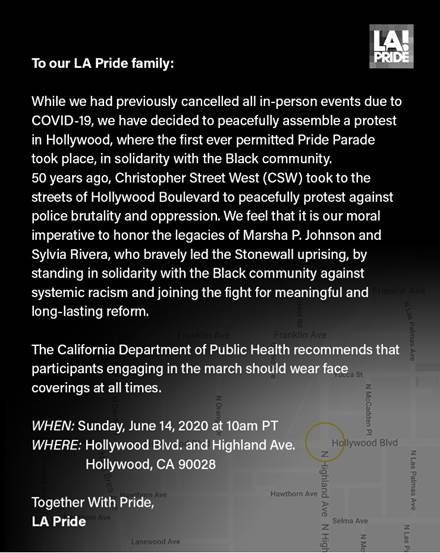 Christopher Street West (CSW), a 501(c)3 non-profit, organized the world’s first permitted parade advocating for gay rights on June 28, 1970, as a response to and in commemoration of the Stonewall Rebellion on Christopher Street in New York City the year prior. Since then, we have built a rich history as an active voice for the LGBTQ+ community across the Greater Los Angeles metropolitan area. Today, we continue to produce the globally-recognized LA Pride Parade and Festival every June in the City of West Hollywood. We also organize a number of events throughout the year with our non-profit, philanthropic, community, and