“It’s here! PRIDE 2022 🌈✨,” @Xtina tweeted on her official Twitter account. “Time to celebrate, fighters! Grab your merch in West Hollywood ahead of #LAPride 💋.”

It's here! PRIDE 2022 🌈✨
Time to celebrate, fighters! Grab your merch in West Hollywood ahead of #LAPride 💋 pic.twitter.com/K3RUIh3Env

Christina announced on her Instagram Story that she would swing by the LA Pride Merch Pop-Up in West Hollywood at 7pm. “I’ll be watching my Pride pop-up tonight around 7pm,” she posted. “Hope to see you all there!” 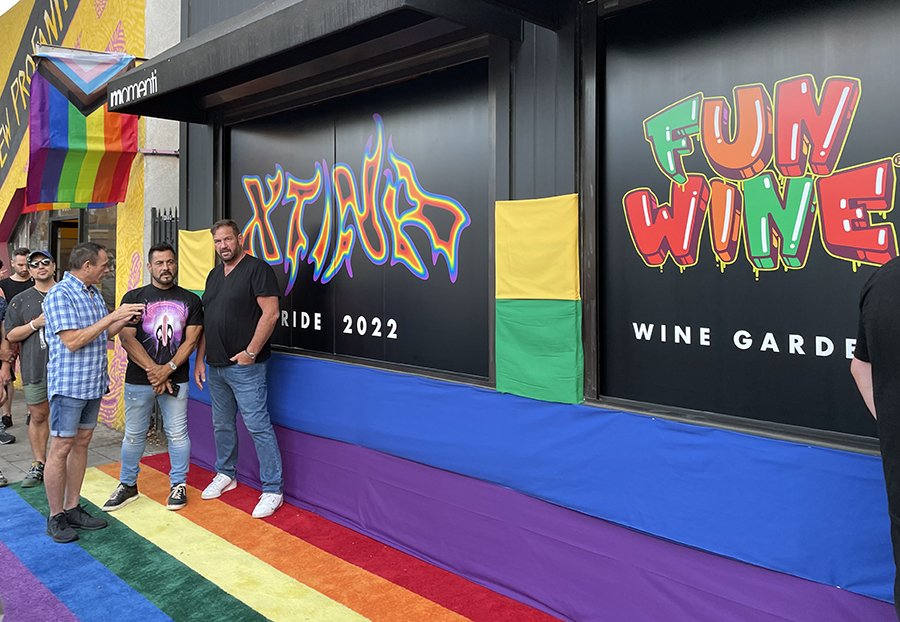 According to social media posts, she showed up in West Hollywood closer to 8 p.m.. During her visit, Christina posed for numerous photos with eager fans. She also took several group photos outside the colorful storefront on the rainbow carpet.

The pop-up is sponsored by Fun Wine where Christina has recently taken the role of the company’s Chief Culture Officer. Inside the pop-up is a step and repeat, several photo backdrops, and Xtina portraits. There is also a wine garden at the outdoor patio where fans sipped Fun Wine.

XTINA’s 2022 PRIDE COLLECTION is in celebration of her upcoming performance at this year’s LA Pride Festival on June 11th – exclusively at Shop.ChristinaAguilera.com.
The exclusive four piece collection will be available beginning June 8th and features unique and colorful designs inspired by the LA Pride Festival. Scheduled to arrive this June to keep the 2022 PRIDE celebrations going, the new exclusive collection ranges from $40-$125 and include the following:
LA PRIDE 2022 TRUCKER HAT – $40
XTINA HEART TEE – $50
LA PRIDE 2022 TEE – $50
SAY GAY HOODIE – $125

The multi-stage event will return Saturday, June 11, after a two-year hiatus due to the COVID-19 pandemic and a move from West Hollywood Park to Los Angeles State Historic Park. Located at 1245 N Spring Street, the park is within the Chinatown neighborhood of Los Angeles, known as the Cornfield, the former brownfield. Across 32 acres between Spring Street and the tracks of the Metro Gold Line, with a capacity for 25,000, LA Pride In The Park has the potential to be the largest Official Pride concert in the country.