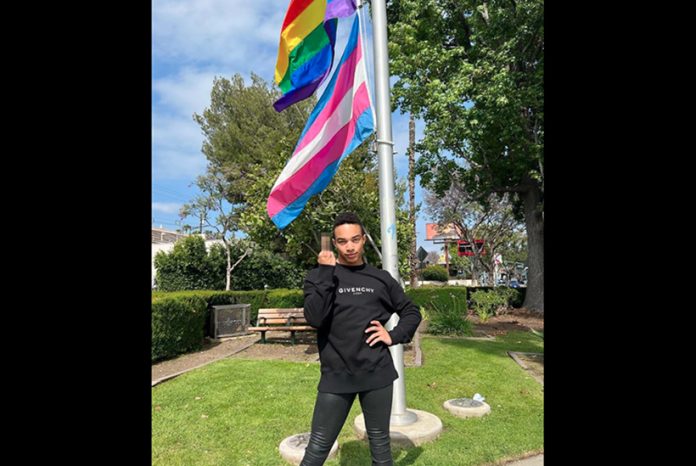 Gay ultra conservative Log Cabin Republican and self-professed Trump lover, Christian Walker, posted anti-pride messages from the Matthew Shepard Triangle in West Hollywood at the start of Pride Month. The posts stamped June 1st on his Instagram account, show Walker standing in front of the transgender and rainbow pride flags at Crescent Heights and Santa Monica Boulevard. The flags were still lowered at half-staff by President Joe Biden as a mark of respect for the victims of the senseless acts of violence perpetrated on May 24, 2022, by a gunman at Robb Elementary School in Uvalde, Texas.

The gay son of former NFL star and Republican Senate candidate, Herschel Walker, is pictured with his middle finger presumably aimed at those he calls the “Rainbow Cult.”

“Honey bun, why do you need a month to celebrate who you sleep with?” He added in a video post. “Newsflash, NOBODY CARES! You have all your rights, now shut up. You take a pride month out to run around the streets with no clothes on and hookup in public and then you run around crying, ‘oh, I’m so oppressed, no one likes me.’ Well stop pushing it in everybody’s face. No one cares. But the truth of the matter is, you want everyone to care, because you need attention. It’s 2022. We can barely afford gas in America. Nobody has the time to run around worrying about what you do and policing your actions. Get over your insecurities and leave everyone alone. Oh, and by the way, pride is a sin.”

And then he sashays away from the camera frame.

There are many who may disagree with Walker’s assessment that “nobody cares.”

Twelve days after his anti-pride post, 31 masked men tied to a White nationalist group were arrested near an Idaho pride event on Saturday. They were found packed in the back of a U-Haul truck. Police said the group had been plotting to incite chaos at the Pride in the Park event in Coeur d’Alene City Park, 10 minutes from where they were arrested. The group was reportedly busted after police received a tip from a local resident who spotted the group of men, donning white masks and carrying shields, load themselves into the vehicle.

RIGHT NOW: Coeur d'Alene police have released the mug shots of the 31 individuals that within the U-Haul who have been charged with conspiracy to riot at a pride event. They come from numerous states.
Their first appearance will be tomorrow and they all have posted bail. pic.twitter.com/3uHgrcfH6T

Arizona man Ethan Schmidt, who was reportedly seen on video threatening to “hunt” LGBTQ supporters in Target stores, was also arrested this past weekend for violating a court order in a different case during the “March for our Lives” demonstration on June 11th.

Then there are the 238 anti-LGBTQ+ bills introduced so far in 2022 and a Supreme Court poised to repeal the underpinnings of LGBTQ+ rights.

Christian Walker added another video in the same post where he lists several examples where he says he grew up wanting a man and that he’s not prideful about it.

Grrrrl, that shirt is a sin.

Hun, you live your life as you see fit and allow the rest of us to do likewise. It’s not a one size fits all situation. Seems yur just an angry Thang seeking yur 15 minutes of fame. Buh bye now.

Decades ago, during the Reagan administration, I was a Log Cabin member. I quit when I saw the meetings that were held in West Hollywood were just a venue for old guys to pick up young guys. And, I realized that I was politically naive.

Talking with long-time Weho residents and gay friends over the weekend – they fairly expressed in various ways the same things as Chris Walker i.e. this has gone too far.