“Hello, daddy, hello, mom! I’m your ch-ch-ch-cherry bomb!” Cherry Bomb is bringing a fresh and safe space for the lesbian community back to West Hollywood. With events currently at Revolver Video Bar, located at 8851 Santa Monica Blvd., and the upcoming “Meet Me in the Park After Party” at Beaches WeHo, 8928 Santa Monica Blvd., on Saturday, April 30, 2022, from 6pm-2am, Cherry Bomb is highlighting on the “L” in LGBTQ+.

With Lesbian and Queer Women Visibility Week in full swing in WeHo, I chatted with Cherry Bomb creators Alison Freed and Barb Mayo about their upcoming WeHo Pride Takeover event and their dream to open a brick and mortar home for a lesbian bar with the hopes to attract a new and thriving lesbian community to the Greater Los Angeles Area.

Tell me how did Cherry Bomb come be?

Alison Freed: Cherry Bomb is a product of 10+ years of wishing that there was a space in West Hollywood that was geared towards women. Not just a night, not just a bar, but a home base and safe space open during the day and night where women could be surrounded by other women. It has been so desperately needed. During the pandemic, I saw so many ‘For Lease’ signs walking on Santa Monica Blvd that I had this lightbulb moment that the time was now.

Barb Mayo: Alison and I both play in the Varsity Gay League Kickball. We met each other after a social gathering after one of our games. She was talking to her group of friends about wanting to open a lesbian bar called Cherry Bomb. I overheard her conversation, turned around, and told her that I wanted to be an investor in her project.

What has been the response to the Cherry Bomb event?

Alison: The response has been incredible. Truly incredible. We’ve grown exponentially and have had so many people come out to our parties. At our very first party, we had an absolutely packed club at 2am when the lights went on. Our second party, we had a line around the block at 10pm on a Thursday. That was an incredible moment. Our most recent party was packed from 8pm to 2 am and so incredible that we were offered a Friday night, something women have not had in West Hollywood in the last 11 years that I’ve lived here. People fly in for our parties, change flights to be able to go, and drive from other cities! It’s wild! And I feel that it’s a testament to the vibe and heart of what we have created. This truly inclusive, joyful, sexy and fun space.

We are so excited to be taking over the gorgeous newly renovated Hotel Ziggy for West Hollywood Pride June 3rd-June5th (located at 8462 Sunset Blvd, walking distance from the pride festival and the pride parade)! This is HUGE! It’s the first time women and gender expansive people will have a home base and safe space for the whole weekend!

Barb: There has been a huge buzz around town about our events. People stop me when I’m walking around my Weho neighborhood and ask when our next party is. My neighbor just the other day said that one of his girlfriends mentioned our party and invited him to come along. People can’t wait until we actually open a bar.

Is Cherry Bomb as a weekly or monthly event?

Alison: Currently it is monthly, but Cherry Bomb is growing so fast, we shall see!

What words would you use to describe Cherry Bomb?

When is your next Cherry Bomb?

Sounds like Cherry Bomb has a big Pride 2022 weekend events planned.  What is happening for the full weekend?

Barb: We are about to make history for WeHo pride! I have lived in LA since 2000, and there has never been an entire weekend just for women. Usually, we party with the boys or there is 1 party at a random bar.

Alison: Yes, like Barb said- we are truly excited. We are taking over the whole hotel from Friday June 3rd to Sunday June 5th as a home base and safe space for women and gender expansive folks. We will be hosting pool parties on Saturday and Sunday, night parties, art showcases, brunch, and single mixers. We are also the official Women’s Freedom Festival party on Saturday with our very own DJ Kara spinning.

So are you looking for a stable safe space for Cherry Bomb events.  Are you seeking an established bar for a special nights or place to open a 7 day bar?

Alison: Yes, the goal is to open a brick and mortar home base and safe space for women and gender expansive folks in West Hollywood- a bar, café, restaurant, and music venue. We will continue doing events, night, and shows, and I hope to keep branching out into other areas as we highlight lgbtq+ women in fields ranging from comedy, music, art, TV and film, and the culinary fields as well.

Barb: The ultimate goal is to actually have a lesbian bar preferably in Weho. Alison and I have looked at many spaces this past year, but have not found one that fits our needs. It’s either the wrong size, too much of a build out, or not the ideal location. While we were in this process, we figured we would at least get the Cherry Bomb name out there. So we started doing monthly parties at West Hollywood bars including Stache, Revolver, and soon Heart.

The Palms bar closed in 2013 how has the lesbians’ club scene changed in ten years?

Barb: My friends and I were going to school at UCSB in the 90s. We used to drive up from Santa Barbara on the weekends just to go out in West Hollywood. At the time there was The Palms and Girl Bar. Once those bars closed, we no longer had our own space to call our own. West Hollywood bars have mostly always been for gay men. That is still the case today. We usually get a week day lesbian “night” at a couple bars in Weho. About 10 years ago, the most popular lesbian event  “Truck Stop” at Here Bar (currently the Chapel). It was the place to be on a Friday night, and seemed like every lesbian in Los Angeles was there. The crowd was diverse, the dancers were smoking hot, the music was amazing, and there was this energy in the air that I haven’t felt since Cherry Bomb. It was nostalgic. Alison and I wanted to recreate the energy of Truck Stop. I think it’s important to have safe spaces to call our own. A place where we can be ourselves, see our friends, openly be affectionate with our partners in public, and validate our sexuality.

Alison: Like Barb mentioned, I also used to drive into town for Truck Stop, and it had a lasting impact on me. When I moved here in 2011, we had a girls night on Wednesdays at The Abbey and then that got moved to Chapel. I often went to those, but most people would show up pretty late and that was hard when I had work early the next day. It feels like our spaces have disappeared, and that is really why this is so important.

Barb: Alison and I are very involved in our community. I am the League Manager of our kickball league, and that gave me access to a few hundred queer women. We spread the word, grew our following on instagram, and launched Cherry Bomb nights at Stache bar. It was a success from day one. Women that I had never seen were there. Now, we have a line around the corner and quickly reach capacity by 9:30. Our Thursday nights are now bigger than most boy’s nights on Thursdays. When people see a line, a buzz, and a great vibe everyone wants a part of it. With that said, many West Hollywood bar owners have asked to host our nights at their bars.

Alison: It really has spread like wildfire, and that is such an impressive and beautiful thing. I remember being so worried in the beginning wondering if anyone would show up. And oh, they do! Every party there are substantially more people, and we need bigger spaces! It’s very exciting. 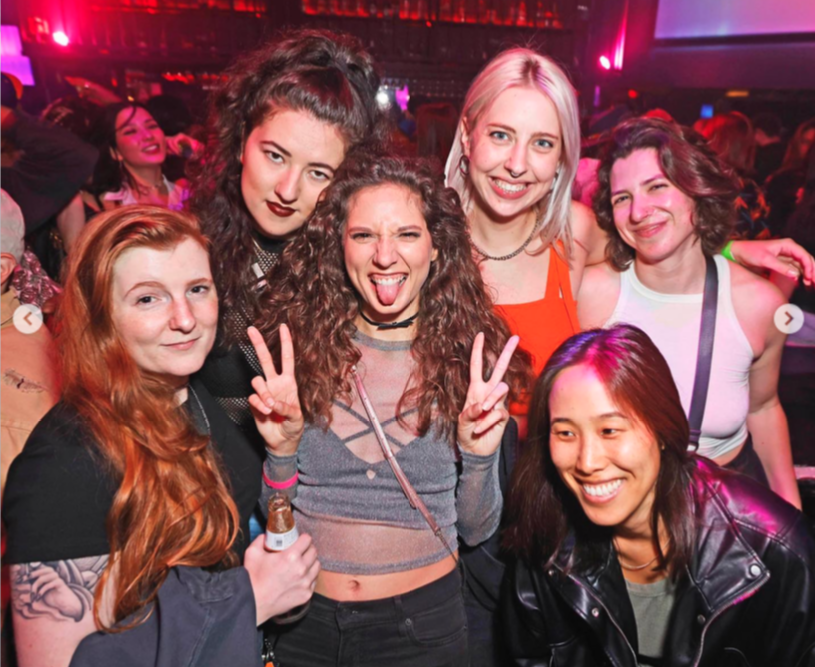 What was your favorite lesbian bar?

Barb: I loved Girl Bar but my favorite lesbian night by far was Truck Stop.
Alison: I second Barb.

What’s up with the two-color wristbands – sounds like a fun way to break the ice.

Barb:  This was an idea I had for selfish reasons, because I’m single. I never approach women because they typically are with friends and I never know who is single or taken. Pink means you are with someone or not open to being approached and Green means that you are single and ready to mingle. The different colored bands are an easy way to see if the person you find attractive is available or spoken for. It’s funny to see how many women look down at people’s wrists and either shoot their shot or keep moving. We have people reach out all of the time and thank us, because they ended up finding love at our parties. I’d like to think that the green wristband played a part in that!

Alison: Yes, these are a huge hit and I wish we had these at parties when I was single! It takes the guessing game out and gives you the green light to flirt with someone safely, knowing they are open to flirtation. And on the other side of that, it lets people know if you are taken, or simply are not open to flirtation for whatever reason. We had people requesting more colors, but we love that it’s simplified. Green means green light to flirt, Pink means friends only please, or not open to flirtation. It makes single women and gender expansive people excited about meeting potential love interests somewhere other than the apps! And as Barb mentioned, we have had numerous people tell us they met their new significant other at our party, or became official at our party. It feels great!

The club have rotating Djs and sexy Cherry Bomb Babes?

Alison: Currently we have DJ Kara DJing our parties and creating curated playlists. For Pride, we will add a couple DJs, and when we open our own space, we will also add more DJs. Music is a HUGE part of Cherry Bomb Weho. We do want to highlight and feature djs that are a part of our community. Same with our dancers, the Cherry Bomb Baes. All of them are part of our queer community, and that was super important to me. We have featured 8 different dancers, and are hosting open auditions for more this coming Friday actually. Bonnie is our lead Cherry Bomb Bae, and she does all the choreography as well. It’s really special to be able to highlight and feature other queer women and gender expansive artists and creators.

Follow Cherry Bomb Weho on Instagram at @cherrybombweho. They are currently offering early bird discounted rates for a limited time for their Ziggy Hotel Pride Takeover. To book a room (includes free entry to the pool parties) visit: www.cherrybombweho.com.