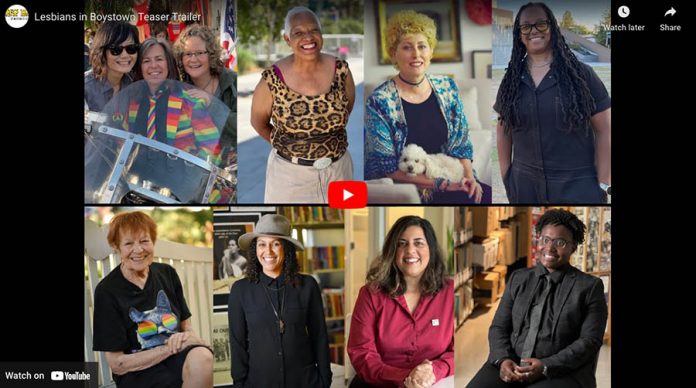 The up and coming documentary Lesbians in Boystown honors queer women who have contributed to the Creative City of West Hollywood while also asking questions around how to build and maintain community. The documentary directed by Betsy Kalin, looks at lesbians’ involvement in business, politics, arts/culture, and health from the 1980s to present day. A teaser trailer went up on December 10, 2022 and it has some very familiar lesbian and queer identified women in the West Hollywood Community.

The documentary explores how since the late 90s, lesbian businesses like cafes, bars, and bookstores have been disappearing across the US. “More lesbian history has been made to disappear than we ever have been able to preserve,” Brinskele stated about her work at the June L. Mazer Lesbian Archives.

As people move, retire, or pass away their accomplishments may be overlooked by younger generations and new residents. Lesbians in Boystown will correct the record by showing that lesbians impacted the city from the beginning, and are still making a difference today.

The documentary is currently in need of funds for its completion. Donations can be made online by visiting:

Betsy Kalin is an award-winning director/producer/writer at Itchy Bee Productions. She is currently in development with the documentary Dreaming in Somali and was awarded a NEH/ITVS Humanities Documentary Development Fellowship for the project. Her most recent documentaries Vision 2030: Future of SoCal and its follow-up Vision 2021: Future of SoCal were both Emmy-nominated. Her previous documentary East LA Interchange has won ten jury and audience awards to date and was broadcast on Spectrum News 1, highlighted on NBC L.A., and is being taught in classrooms at 200 universities worldwide. Her films Roof, Chained!, and Hearts Cracked Open have been honored with multiple awards at festivals around the world. She is currently an Assistant Professor in the Film and Mass Media Department at the University of Central Florida. She received a BA in Women’s Studies from Columbia College at Columbia University and an MFA in Directing from the University of Miami.