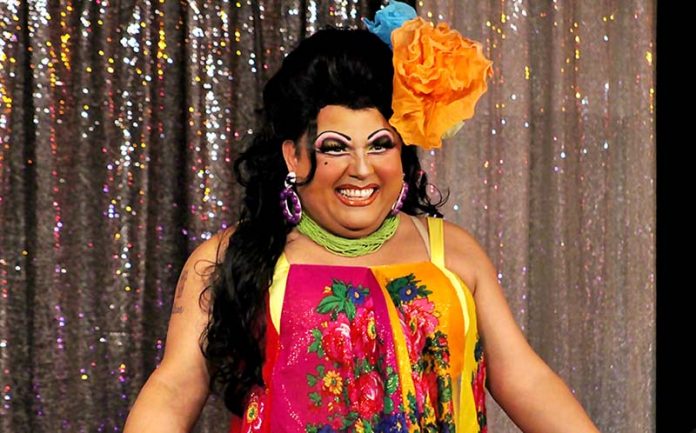 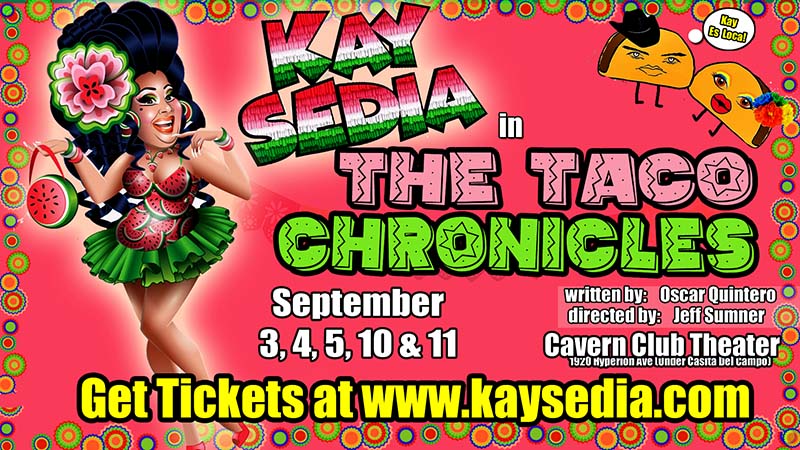 Kay Sedia’s The Taco Chronicles takes the audience on a musical journey with stories and all her LatinaX sexiness.

Kay was born in Tijuana, Baja California, Mexico. She is the youngest of 18 children and the prettiest of them all. So pretty in fact, she won the title and crown of Miss Tijuana Natural Springs Water, “The water that springs right thru you”. One of her duties as Miss Tijuana Springs was a self-guided, one-woman boat tour of the Pacific Ocean via San Diego. Thought to be dead and lost at sea, Kay emerged back into the border spotlight. It was the charity she founded, “Save the Donkeys,” which let her hometown know that she was O-Kay! She soon became romantically involved with her hunky arresting immigration officer. To prove her love to him, she joined the police academy… and failed. She then turned to high fashion modeling where she could make lots of money using her stylish good looks and charming personality. She had huge success with modeling girdles in the Penny Saver Magazine. After being spotted she was asked to join the crime-fighting trio Chico’s Angels.’

Kay Sedia can be seen in the Netflix original series, RuPaul’s “Aj and the Queen” episode COLUMBUS. Kay has also made guest appearances on “The Real Housewives of Orange County,” “The Real Housewives of Atlanta,” “KTLA Morning News,” “Good Day LA.” “The Dish” and has been featured in the pages of “Entertainment Weekly,” “FrontiersLA,” “The Advocate” and “WEHO TIMES.”

Kay Sedia is celebrating her 20th Anniversary as a top selling Tupperware Diva. She is holding in-person and online Tupperware parties with her brand of comedy wit deep south of the border. Her product knowledge and musical sexiness make her Tupperware Fiesta an unforgettable experience.

Booking parties and online can be made by visiting her website at www.kaysedia.my.tupperware.com.