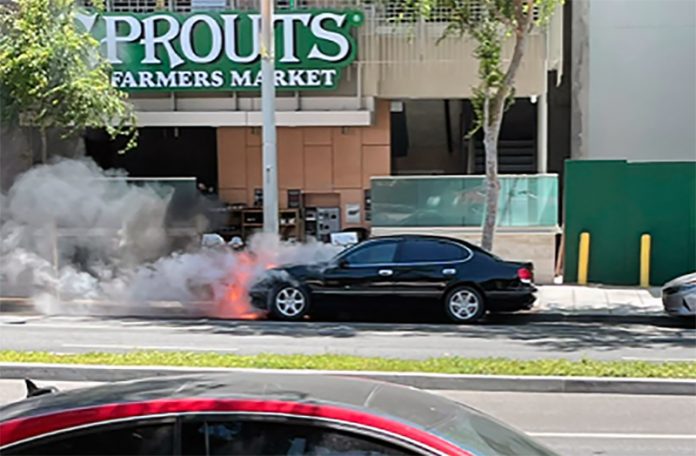 Car drama continues on Santa Monica Boulevard in West Hollywood. A day after a car flipped over on the eastside of SMB, causing traffic jams on Route 66, a car fire in front of Sprouts Farmers Market located at 8550 Santa Monica Boulevard, shut down the eastbound lane on Saturday, April 23, 2022. The fire started at roughly 2:30 p.m.

Video footage shows a parked car spewing smoke and flames from the front hood of the vehicle, while people were eating across the street at Kitchen 24. Pedestrians are also seen walking past the burning vehicle like its business as usual.

“First time visiting WeHo and a car is on fire,” tweeted Hector Yee (@eigenhector) along with a video of the car burning from across the street.

First time visiting weho and a car is on fire pic.twitter.com/JTMk6nadwQ

“Oh nothing, just a regular day in West Hollywood. What about you?” Tweeted Kim K’s Unpaid Housekeeper @_aboylikeme, and added photos and a video of people going about their business while a car is threatening to explode across the street.

West Hollywood sheriffs and Los Angeles County Fire were on the scene. The fire was contained. Some WeHo Times readers questioned why local business did not try to put out the fire with a fire extinguisher, while others suggested putting out burning vehicles is best left for firefighters.

Aside from cars flipping over on Santa Monica and Sunset Boulevards throughout West Hollywood this month, two cars were lit on fire by an arsonist on April 5, 2022. West Hollywood Sheriff’s reported that the arson suspect believed to have torched the two vehicles and attempted to light a third one at the parking lot of 8730 Santa Monica Boulevard was arrested days later on April 8th. A source tells WEHO TIMES, a ring camera in one of the vehicles recorded the suspect stuffing wads of paper in the vehicles and lighting it on fire. The video footage was submitted as evidence to Sheriffs deputies, leading to the arrest.

No details are available yet on the parked car fire this weekend. No injuries were reported.