Captured! Suspect who attacked Another Man with an Ax Now in Custody 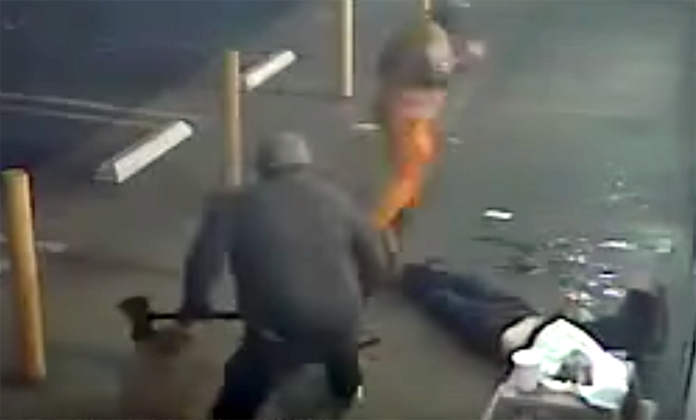 Los Angeles County Sheriff’s Department officials report that the suspect who attacked another man with ax outside the 7-Eleven Store in the 7900 block of Santa Monica Boulevard in West Hollywood has been captured.

It was the type of thing one would see in a slasher film. Surveillance video footage released by police show suspect Kisu Bradey Brown, 41, repeatedly striking another man with a blunt object that appears to be ax or hatchet before fleeing the scene.

The incident happened at 4:00 in the morning last Saturday.

According to police, Brown is known for his outbursts of violence. He has been described as a local transient who has had numerous felony and prior assault convictions.

Sgt. Jeff Bishop said at a Tuesday news conference that the victim witnessed Brown trying to steal some items from the 7-Eleven store and offered to pay for them. Brown became upset and waited outside to attack the victime. The victim fell to the ground after the first swing. A 7-Eleven customer came out of the store and witnessed Brown standing over the victim and repeatedly chopping at his face. The victim suffered multiple head injuries. Bishop reports that doctors are relieving the pressure on his skull with tubes sticking out of his head. The victim also suffered major damage to his hand from defensive wounds, which according to Bishop, was nearly chopped in half. On the morning of the attack Brown managed to get away. K9 was deployed, there was police helicopter activity, and a diversionary device was used that creates a loud sound to disorient the suspect, but deputies were not able to apprehend him.

He was captured on Tuesday–not far from the crime scene–near Fairfax Avenue and Santa Monica Boulevard. Bishop told reporters that Brown could face attempted murder charges. He is being held on a $500,000 bail.