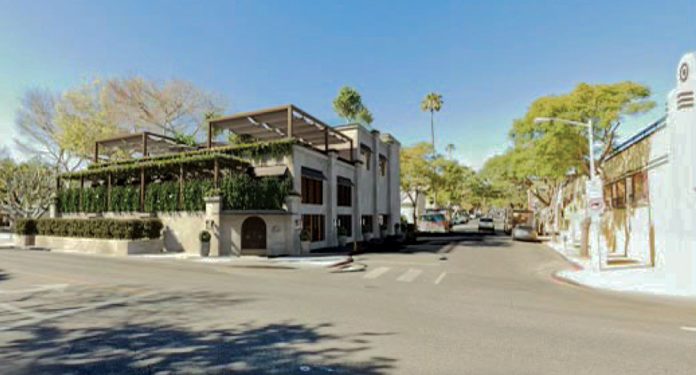 The West Hollywood Business License Commission is holding a teleconference public hearing on Tuesday, September 14, 2021, at 6:00 p.m. One of the items on the agenda is the application by Valkyrie Retail, LLC for a Cannabis Business Consumption Area (Smoking, Vaping, Edibles), for the business known as Villa Noble West Hollywood to be located at 8001 Santa Monica Boulevard, Unit A, on the corner of Santa Monica Boulevard and Laurel Avenue, across the street from the French Market Building.

Villa Noble will replace the original 1922 Spanish Colonial Revival style building currently standing at 8001-8003 Santa Monica Blvd. Some community members may recall the original building had potential historic status eligibility, however the West Hollywood’s Historic Preservation Commission unanimously denied granting it historic status at its Monday, January 27, 2020 meeting because property owner Stevens Land Company LLC had drastically altered and removed the building’s historic Spanish style elements (a move that was done with the permission from City Hall, due to some sort of glitch). The defacing of the property was widely criticized by the commission. 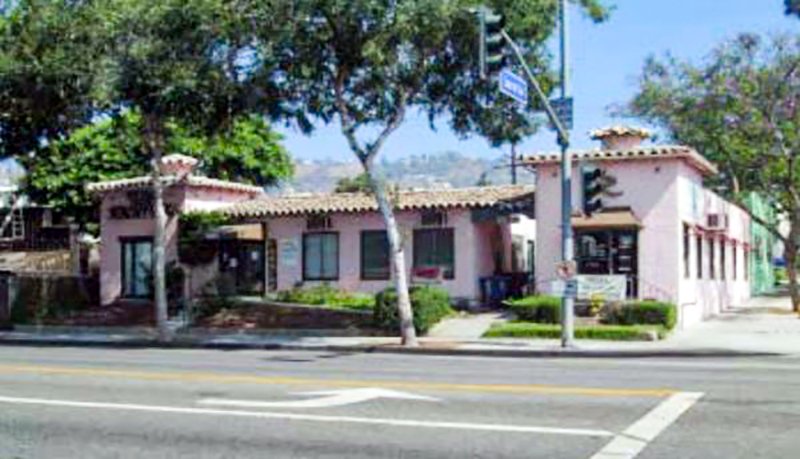 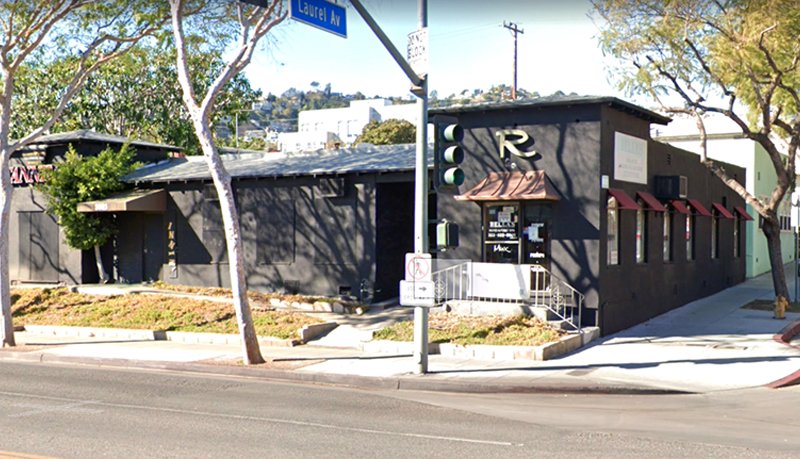 Resident Lynn Russell filed an appeal alleging errors in the original staff report and unsupported findings by Historic Preservation Commission, but the appeal was again unanimously denied (for the same reason), this time by the West Hollywood City Council at a regular City Council meeting on Monday, August 3, 2020.

According to a City Staff report, Stevens Land Company LLC nominated the building for historic status with the hopes of getting denied, thereby removing it from the list of potential historic sites which would limit what the property owner could do with the property.

Cut to September 2021 and we now have the renderings for cannabis consumption club Villa Noble. The original 1922 Spanish Colonial Revival will be demolished to make way for a modern Mediterranean facade offering nearly 20,000 square feet of indoor and outdoor space “inclusive of an expansive all-day cannabis consumption lounge, a 3-meal per day cannabis retail cafe, a VIP library, a state-of-the-art recording studio, and a myriad of amenities that create an elevated cultural experience.” 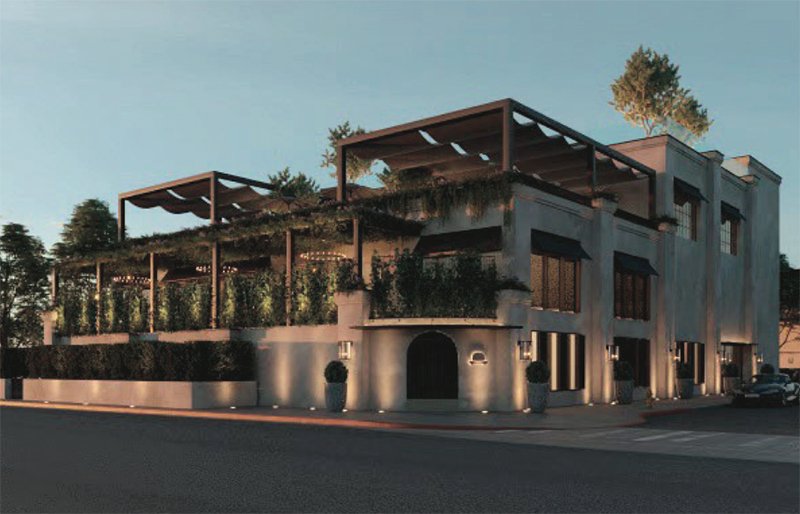 According to a meticulous and beautifully constructed Cannabis Consumption Area Business License Application, “Villa Noble will contribute to the high-volume growth and development in this upscale, walkable neighborhood, alongside other hospitality and retail projects like the Faring owned French Marketplace being constructed next door. The property is properly zoned for cannabis use and has received its conditional Zone Clearance from the City of West Hollywood.”

Not much parking will available for the new development. Vila Noble will rely on on-site valet services, parking stall leases with neighboring businesses, and the utilization of public lots like Crescent Plaza located two blocks away. It will also offer discount incentives for Lyft and Uber riders. There is no mention of the massive empty parking lot located next door, which once served the now shuttered Bank of America building, which closed this past July.

To view the complete Cannabis Consumption Area Business License Application for Villa Noble (worth a look for the photos alone), click below:  http://cms6ftp.visioninternet.com/weho/packets/blc/7B.e.pdf

Community members can participate in the upcoming West Hollywood Business License Commission teleconference audio meeting and provide public comment by telephone or via the ZOOM platform.

You are strongly encouraged to email Falyn Kingi at fkingi@weho.org no later than 4:00 p.m. on Commission meeting day (Tuesday, September 14, 2021) to be added to the Public Speaker List for the meeting. Please include your name, the phone number from which you will be calling if applicable, and which item you would like to speak on.

To provide public comment via the Zoom Platform – When you enter the meeting, make sure to turn off your video and mute your audio.

If you wish to make a public comment, please use the ‘raised hand’ feature in the Zoom application.  You will be called at the appropriate time.  Please turn on your video and audio to make your public comment.

To provide public comment via telephone, please call in and remember to place your phone on mute:

Dial-in 10 minutes prior to the start of the meeting (the meeting begins at 6:00 p.m.) You will be placed on HOLD in the Virtual Meeting Room until it is your turn to speak.