Cannabis Could Be Coming to Old Flaming Saddles Building

A public hearing notice has gone up on the old Flaming Saddles building located at 8811 Santa Monica Boulevard. A Cannabis Consumption Area (edibles) business is applying to set up shop at what was originally the First National Bank of Sherman in the late 1920s, then the Larabee Sound Studio where Prince recorded “Purple Rain”, before it became Club Eleven, and then Flaming Saddles.

The West Hollywood License Commission will hold a Public Hearing via a teleconference to consider the item described as Where Eagles Fly / Fanton Flower, at 8811 Santa Monica Boulevard. The teleconference hearing will take place on Tuesday, June 1, at 6 p.m. A Staff report will be available on Thursday, May 27, 2021 at http://cms6ftp.visioninternet.com/weho/packets/blc/blc.htm. 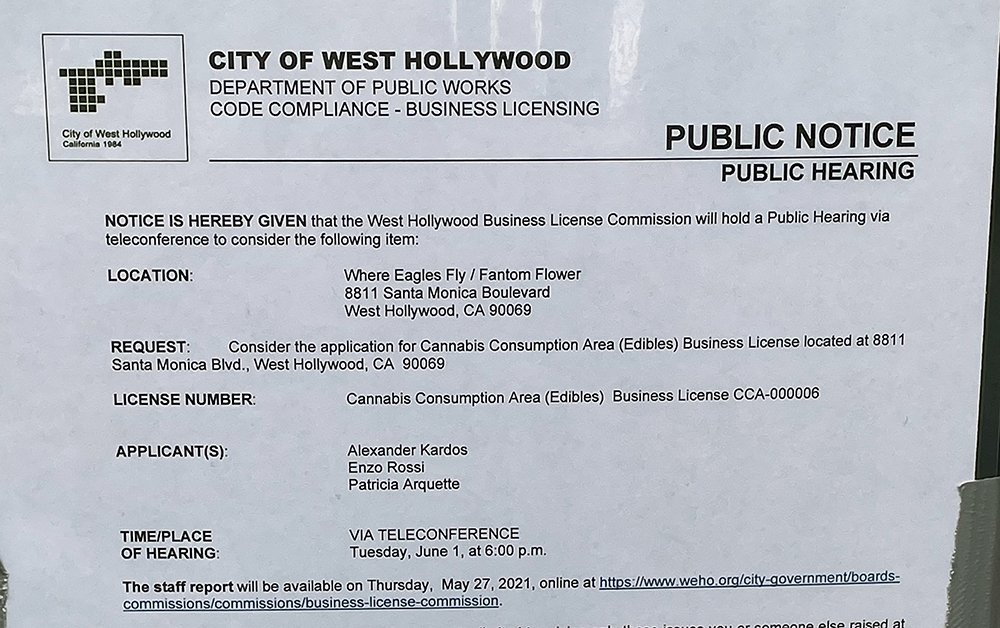 The names of the applicants are Alexander Kardos, Enzo Rossi and Patricia Arquette.

The West Hollywood City Council adopted a Cannabis Ordinance in 2017 allowing a handful of different cannabis business types to be licensed in the City of WeHo. Where Eagles Fly / Fanton Flower received a top ranking as an edible lounge.

The notice states that those who challenge this item in court may be limited to raising only those issues raised at the Public Hearing described in this notice, or in the written correspondence delivered to the West Hollywood Business License Commission, via the Public Works Department at, or prior to the Public Hearing.

Those wishing to comment on the proposed Cannabis Business License Application may either call the meeting to provide comments via phone, or by submitting written comments to the Business License Commission Secretary, fkingi@weho.org, no later that 4 p.m. on Commission day (Tuesday, June 1, 2021, to be added to the Public Speaker List for the meeting). Commenters must include name, phone number from which they will be calling from if applicable, and which item they would like to speak on.

The Flaming Saddles Saloon closed on the corner of Santa Monica Boulevard and Larrabee Street in mid-August of 2020 after operating as a gay country western-themed gay bar for five years.

An official statement on the former bar’s official Facebook page sites that the owners were not able to negotiate their lease with the landlord during a time of COVID. Monte Overstreet owns the former Flaming Saddles Building. He also owns the properties where Rage Nightclub, Gold Coast Bar and Oilcan Harry’s once stood before they also shuttered in 2020.

All interested persons are invited to attend this Public Hearing to express their opinion on the proposed cannabis business that intends to open at this space.

for further information, contact Yessica Benitez, Code Compliance Supervisor, at (323) 848-6829 or via email at vbenitez@weho.org.

I thought cannabis businesses weren’t allowed at that address per this map:

Kudos to wehotimes.com for making this public notice public. These type of things tend to happen under the radar. Hopefully people will speak up at the meeting on June 1 to put a stop to this horrible idea. Patricia needs to take to pot lounge elsewhere.

Totally against this. The location has always been a gay nightlife destination and is in the heart of the strip. It’s hard to believe they cant find a nightlife tenant (bar/club/restaurant). Im fine with dispensaries, just not in the middle of the strip. We need to stop this.

This article states it started as a bank in the 1920’s and eventually became a recording studio which was used by Prince to record Purple Rain in the 1980’s. I’m not sure what your definition of “always” is, but I know it’s not the same as what it means for everyone else. If you want to have nightlife mainstays keep their homes start pressing on the person who owns the property and pushing out his tenants.

Hi nightmare landlord Monte Overstreet. Found any new tenants during a pandemic for the many gay bars you shuttered? You will lose just as much money as you would have if you had not dumped them and they would be ready to go to earn money again when the state re-opens June 15!