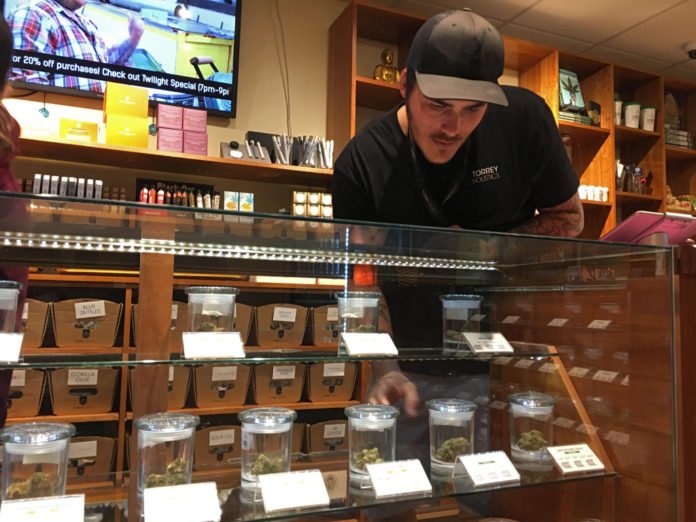 The state on Thursday issued the first batch of business licenses to sell and transport recreational-use pot, just 18 days before legal sales will begin on Jan. 1.

The 20 temporary licenses — some of which were for the previously existing medical marijuana industry — represent a fraction of the thousands of licenses expected to follow as the state embraces legal weed in 2018, but their release set off jubilation.

The first distributor license for recreational pot was awarded to Pure CA, which does business as Moxie brand products, a company known for its cannabis extracts.
“I couldn’t be more excited,” CEO Jordan Lams said.

At Torrey Holistics in San Diego, Tony Hall credited his business background and detailed application with helping land the first license for a retail shop to sell recreational pot. The store, which has two certified public accountants, a chief financial officer and marketing director, submitted a 60-page lease, diagrams and a detailed business plan.

“I think it’s how we conduct our business. We all have a professional background,” said Hall, the former owner of a chemical distribution company who opened the medical marijuana shop two years ago with a college friend.

He sees recreational marijuana taking off like the wine and craft beer industries.

At his store, customers go through an electronic security gate manned by a guard. Once inside, the business looks like a stylish pharmacy with wood floors and Christmas decorations.

“The taboo part is slowly going to be removed and this is going to be like any other business,” Hall said.

The small number of recreational pot licenses — and the quickly vanishing year — mean that choices will likely be limited for consumers looking to ring in 2018 with a legal purchase on Jan. 1. Businesses must have a local permit and a state license to conduct business in the new marketplace.

In general, California will treat cannabis like alcohol, allowing people 21 and older to legally possess up to an ounce and grow six marijuana plants at home.

The route to legalization began last year when voters approved Proposition 64, which opened the way for recreational pot sales to adults in the nation’s most populous state, home to one in eight Americans.

A patchwork of rules has emerged with some cities embracing legal sales and others banning commercial pot activity.

Companies expect that it will take time for society to adjust to marijuana’s legality, and for the new market to settle in.

“California has been without regulations for a very long time. So there is going to be a transition period,” Lams added, referring to the changes coming in 2018 with legal cultivation and sales.

Come January, the newly legalized recreational sales will be merged with the state’s two-decade-old medical marijuana market, which is also coming under much stronger regulation.

The state and hundreds of cities have been struggling to devise rules to govern the vast, emerging industry with a projected value of $7 billion. The state’s online system to apply for a license opened just one week ago.

To date, more than 1,900 users have registered with the online system, and more than 200 applications have been submitted. The numbers suggest many retailers and growers are holding back — by some estimates, Humboldt County alone has up to 15,000 unregulated pot grows.

In the background is widespread uncertainty about whether President Donald Trump’s administration will attempt to intervene in states where marijuana is legal.

As marijuana is illegal in the eyes of the federal government, major banks are leery to do business with dispensaries and growers so much of the business is conducted in cash.

Cannabis Consumption Lounge is Coming to The Artist Tree WeHo