After much speculation and rumors that the Gold Coast Bar in West Hollywood was closing, one of the bar’s owners, Bryan Worl, has confirmed via a heated Facebook post that the GC is “closing for good” after 39 years.

One of the oldest gay bars in West Hollywood, The Gold Coast bar, located on the corner of Santa Monica Boulevard and North La Jolla Avenue, on 8246 Santa Monica Blvd., becomes the fourth gay bar to close on Santa Monica Boulevard. The LGBT community has lost Gym Bar, Flaming Saddles, and Rage Nightclub due to the COVID-19 pandemic, which has forced all bars shut for the past six months.

In an attempt to shut down rumors and beat everyone to the scoop, Worl posted the following on his Facebook timeline:

“This is going to be quick and simple because there are very rude and sick people out there that thing because they say it first they’re some kind of hero and they won’t let the owners handle the situation under their terms and how they want to hand it after fucking 39 years of business…I will call your fucking names out!!!!! Yes. The GC is closing for good… We do not have a choice.. We have fought and tried everything with pressure from very selfish and heartless people. I did NOT want to handle it this way and I’m super pissed. You can’t give the respect to a bar that’s been there for 39 years and let us handle this the correct way?? I have to write a FB post in 2 seconds to stop people from their 5 seconds of fame and being the first to post something about this. It’s not fair to the employees of the GC wh are just learning of this. Are you kidding me???? This is beyond hard enough to lose a business and then not even have time to get something together and announce this in a civil way. I can’t…just can’t!!!” 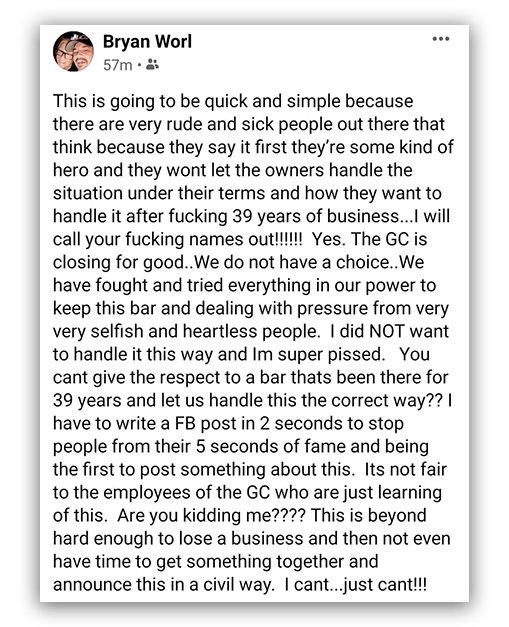 In a followup post, Worl added that his partner of almost 26 years, Robert Hastings, the first owner, “…can’t even see his little piece of gold one last time.” Hastings has been fighting off Stage 4 cancer and is not able to travel.

Worl added that they would clean out the bar this coming Saturday, September 26, 2020 and that they would open their doors to anyone who wants to stop by. “If you want to stop by and say hi or come in for a quick pic or a last goodbye…I feel lot of people would like that, just make sure you have a mask…”

There have been rumors that Gold Coast Bar was closing for months and for months the owners have denied the rumors. The rumor mill escalated after the Gold Coast sign was removed from the building earlier this month. Former employees said it was removed so that it wouldn’t be stolen by rioters, but the sign was intact well past the looting that forced the bar to board up its windows on March 30th.

Monti Overstreet owns the the real estate at Gold Coast, Rage and the Halal Guys, which have all gone out of business due to rent negotiations gone south.

The Gold Coast Bar was known for being an unassuming gay bar with a happy hour and late-night drink specials. The bar hosted several fundraisers which includes the ever popular Red Dress Party.

I am so sad to read about the Gold Coast closing its doors. Its been awhile since I have been there but I have had many great memories with friends and 24 hours or less new friends when I used to visit I even carved my initials on a pillar by the pin ball machines . Truly a legendary bar that will surely be missed. It will never be forgotten and will live in the memory of thousands of patrons. Thank you for all the great laughs and good times .

Many years ago my friend Earl worked at the Gold Coast AND Circus of Books….so sad how the Boulevard is changing….

Oh wow,tough break..this pandemic has affected alot of businesses world wide. In my youth Weho was my place if refuge and a get away. Gold Coast bar as well as years ago when I frequented WEHO was also the WEHO LOUNGE…that was some years ago. Nonetheless Gold Coast bar attracted alot of publicity and sometimes even celebrities.. So Long Gold Coast thank you for the good memories ♥️ oh and also wanted to add I loved reading Paulo Murillo’s articles in the Frontier Magazine lol him and his adventures with good friend “WHORENANDO” LOL (FERNANDO) LOL LOVE THE MEMORIES ♥️♥️

Sadly, the elected officials who were voted in by the far left residents of Weho are know getting screwed by developers and the rich elite. They have decided to fund BLM and Trans groups and letting the city of west hollywood turn into North Hollywood.

That name again. Monte Overstreet. Pathetic individual leading the commercial blighting of West Hollywood. Very said that gay man that has been a resident here in Weho since at least the 80’s is the leading cause of business closures and unemployment in a 10 block stretch of Santa Monica Boulevard. Quite ironic that a man that benefited professionally, economically and personally from the livelihood of gay bar and nightclub owners is the one to throw them under the bus without consideration.

I have lived in weho for 30 years and I have seen the city spend money on some really dumb stuff. I can’t help but to think all the money they save with no Halloween festival and no gay pride festival how can they become cannibals and let their own be eaten alive and shut down? We are one of the wealthiest cities in the state of California and in the country per capita so I don’t understand how the city didn’t step in and assist these gay owned and operated businesses. It would be unorthodox and unprecedented in any… Read more »

Worl is continuing to show his true colours! Karma’s a bitch! He could barely keep the great history of GC alive under his poor management. He treats his staff and customers like crap. Karma’s a bitch!

It is ridiculous to get mad at your customers that want to know what’s going on when refuse to say anything. The owners took down that sign because they were closing and they lied to their customers by saying they were not closing. If you don’t want people talking shit about you then I suggest you be little more transparent. How hard was it to give your loyal customers a little update? The angry post is not justified in my opinion.

Bryan Worl is bitter — although several more appropriate terms come to mind: dolt, pig, ass, leech, moron, idiot, imbecile, slubberdegullion, son of a bitch, ingrate. Blaming everyone else has always been his schtick — it’s so much easier than accepting responsibility for his own bad behavior over the years. Now he’s whining like an infant because his former customers are directing their vitriol in his direction instead of the other way around. You made your bed Worl, now sleep in it.

Nothing more true could be said for this pig! He deserves what he’s getting. He ran GC into the ground before Covid. He’s demended.

I liked the Gold Coast but that letter seems so bitter coming from a business person. I know that we are in a pandemic with no end in sight but why not just say thank you & good bye? What were people supposed to think when it has been boarded up for months & the sign taken down a few weeks ago? Did they try setting up tables on the back serving drinks & having Marco’s or another restaurant serve food to make some money??

Breaks my heart. GC and the others that have closed have always had their doors open to non profit organizations for fundraising, and generous with their own personal resources as well. They have given so so much to the entire community, the ripple effect will surely be devastating for all. Bless them for all they have given of themselves over the last 35 years.

Greedy old miserly bitter bitch Monti!! She is angry and single and will die alone.

THAT GREEDY FUCK NEEDS TO BE SEVERELY PUNISHED! “Monti Overstreet owns the the real estate at Gold Coast, Rage and the Hallal Guys, which have all gone out of business due to rent negotiations gone south…”

ABOUT US
WeHo Times West Hollywood Daily News, Nightlife and Events. The WeHo Times is an online news source covering the life and times of the City of West Hollywood. Featuring unbiased professional reporting and photo journalism, WEHO TIMES is updated daily, delivering the latest city news. The online publication founded in 2017, also features cultural events, people, politics, places, nightlife, and the history that make the City of West Hollywood the unique, creative city we all know and love.
Contact us: editor@wehotimes.com
FOLLOW US
© 2021 Murillo Media, LLC
wpDiscuz
17
0
Would love your thoughts, please comment.x
()
x
| Reply