Beloved Faultline Bar located at 4216 Melrose Avenue, has closed for good after serving members of the LGBT+ community for 26 years.

Founded in 1994, the iconic gay space was known for its indoor and outdoor bars with a large outdoor patio area. It featured a mix of themed nights, go-go boys, DJs, live performances, outdoor parking lot events, and a long-standing Sunday beer bust destination known to attract upwards of 600 participants.

Its closure makes it the latest queer space to flatline during the Coronavirus pandemic.

New co-owner, who identified himself as Armando Cabana, confirms the Faultline’s closure and says he has big plans for the historical space that was once mainly populated by members of the LGBT leather, kink and fetish community.

“Faultline Bar is long gone,” Cabana told WEHO TIMES. “The place was up for grabs. The owners just left it and it was a blessing in disguise. I have a good vision for the space. I’m taking my time, and little by little, I plan to turn it into something special, funky and loungy, where people can come and chill out.”

Cabana says the name for the bar could be The Melrose Home, but that name is a work in progress and could change as he develops the space.

“Part of the plan is to partner with the cannabis dispensary located across the street and offer a space where people can go there and then come here to hang out, maybe have a cappuccino, enjoy some good music and have some positive vibes,” he said.

Other ideas circling around the new space range from yoga classes, piano lessons, to a cafe with other open possibilities.

There are only a few signs of what once was. The heart rate monitor symbol is still at the side of the building and the Faultline photo booth is still located inside the bar with the bar’s logo on the side. The fire pit is currently covered up and the bars are intact.

The Faultline Bar sign at the building was removed months ago, sparking rumors that the place was lost. No one expressed any interest in the sign, so it was discarded.

“If you had come here last week, I would have given you the actual sign,” Cabana said. “I think it’s historical but no one wanted it. This place has a lot of history. It was once owned by Judy Garland.”

And speaking of Judy Garland, according to the Los Feliz Ledger, the Faultline space was a venue called the Red Rouge in the 1960s, owned by the gay icon and her then husband, Sid Luft. Legend has it that as the concrete floor was being laid down, the star put her handprint and signed her name on the cement slab behind the bar back in 1963—however, If Judy’s autograph and hand print exist today, we were not able to find them during our tour of the bar.

“I’ve been club promoting in Miami for 15 years and I want to bring a funky space where people can come here and maybe get piano lessons, stream original content and be real,” Cabana stated. “With the recent shutdown during COVID, I can take my time and come up with ideas. I want to offer a space where people can chill out. I just want to have a place for cool people to hang out in.”

The space will be open to everyone and will no longer be exclusively gay, or cater to the gay leather community like it has for the past 26 years. Armando says he hopes people will take advantage of the space and rent it for private parties if they wish to relive the Faultline experience.

“It’s not going to be gay anymore, but this can be the kind of space where you can throw any kind of party you want,” he said. “I go where there is good music and good people. Whatever you choose sexually or whatever gender you are, I’m fine with all that. It is what it is. I just like good vibes. This will be great place to chill. Low key.”

“We will be back soon,” reads a message on their home page. “Follow our social media platforms for news and updates. We are ALL in this together, please stay safe and take care of each other.”

The bar’s current official social media platforms do not mention its closure either, not even after rumors have been circulating that it was closed months ago.

It’s business as usual on their Instagram account where a photo was posted today showing a packed bar during its heyday. 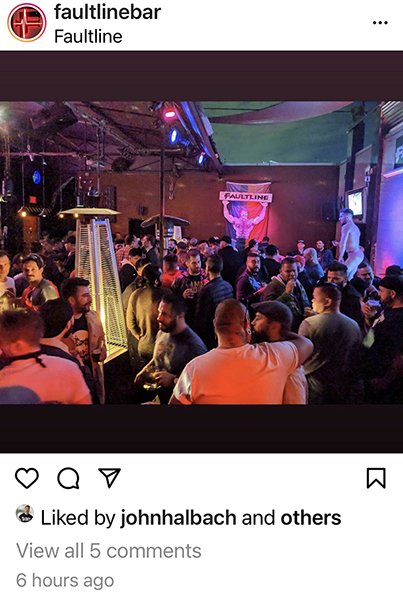 The Faultline Bar was founded by Shawn Farnsworth. It was The Stud, a Levi/leather cruise bar from 1974 to 1988, and then morphed into other gay spaces like that include Griff’s, before it became the legendary Faultline Bar in 1994.

It has exchanged hands of ownership over the past several years. Jorge Usatorres purchased the bar in 2015 and sold it to Ruby De Fresno / Ruby Nuno, the most recent co-owner of the bar. She said she purchased it from Usatorres with the intent on respecting and building upon its gay tradition.

“We want to make sure it continues,” she said. “We didn’t want to see the Faultline go the way of so many other iconic gay bars in Los Angeles.”

The details surrounding the closure are not yet known.

Editors note: The article was updated to reflect that the Faultline Bar was once was The Stud, a Levi/leather cruise bar from 1974 to 1988, before it morphed into other gay spaces like that include Griff’s.

This literally just made me cry

What made this location a success was the fact that it was a leather bar hidden in the neighborhood where no one would know there was a gay bar. Right in the middle of East Hollywood Barrio. You can walk in after work be yourself play pool have a beer listen to rock and roll and relax. No agenda. You didn’t have to dress up. Walk in with jeans and a t-shirt and talk to a regular local gay guy. The last 10 years, after its popularity, similar agendas like the one the new owner is thinking about were unsuccessful,… Read more »

Gosh, I’ve been waiting decades to find a place where I can get a cappucino & piano lessons after buying weed. 15 years of Miami nightlife & this is what he brings to Los Angeles? *eye roll*

Can’t wait to see how it turns out!

Funny you should mention Trump because like Trump, it turns out, you sir, are “WRONG!”

An end to an era of gay establishments and safe space. Another victim of the pandemic and failed democratic policies at every govt level. In addition, the the growing dispensaries being approved all over the city, which is the last thing this city needs. It just brings crime and vandalism.

And then we have this. SMH
Apparently it’s not closing.

I drove by there today. It is most definitely closed. That much is apparent. Not sure what kind of game they’re playing.

Oh gosh! I can’t wait for the Reality Show!

The new owner should just call it The’Rose

To hear the lack of perspective and utter cluelessness behind what the owner wants to do to the place cuts deeper than anything.

The owner’s ideas for the space sound like terrible mad libs.

It was a gay leather bar LONG before it became the Faultline in 1994. From 1974-1988 it was called The Stud. After that, it was called Griff’s. Judy Garland’s ownership notwithstanding, you egregiously omitted a significant part of it’s history, and the meaning and impact for the gay and leather community.

I know what it means. I’m just poking fun.

ABOUT US
WeHo Times West Hollywood Daily News, Nightlife and Events. The WeHo Times is an online news source covering the life and times of the City of West Hollywood. Featuring unbiased professional reporting and photo journalism, WEHO TIMES is updated daily, delivering the latest city news. The online publication founded in 2017, also features cultural events, people, politics, places, nightlife, and the history that make the City of West Hollywood the unique, creative city we all know and love.
Contact us: editor@wehotimes.com
FOLLOW US
© 2021 Murillo Media, LLC
wpDiscuz
20
0
Would love your thoughts, please comment.x
()
x
| Reply