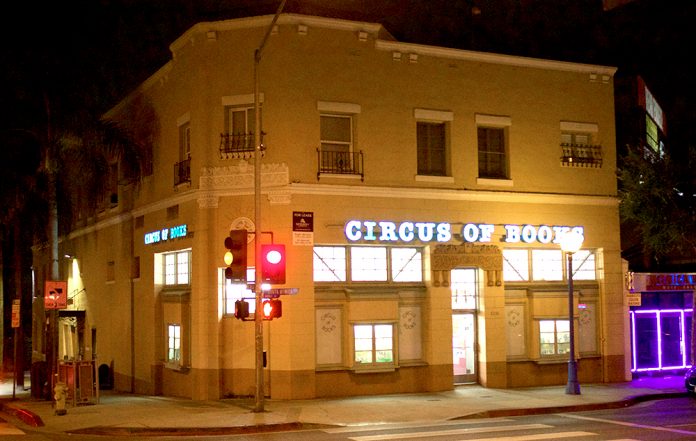 It’s taken over a year, but the owners of the infamous Circus of Books WeHo recently revealed that the iconic adult book store located on the corner of Santa Monica Boulevard and N. La Jolla Avenue, is finally closing its doors at the beginning of 2019.

According to Karen Mason, who owns the store with her husband Barry Mason, Circus of Books, which began operations almost 60 years ago, will close its doors for good in mid-January, 2019.

WEHO TIMES broke the story that the store was closing back in June 22, 2017. Mr. and Mrs. Mason revealed that they hoped to be out of business by December of last year. They figured they’d liquidate their inventory as a final hurrah, before the big top went down at the beginning of 2018. However, the Masons, who own the entire building which stands in front of what is known as Vaseline Alley–a former cruising spot for gay men, took their time to find the right renter for the space. They didn’t have the interest they hoped for when a For Lease sign went up in the summer of 2017. After over a year of searching for the right tenant, it appears the book store’s lifeline ends this coming January.

A WEHO TIMES article published on January 6, 2018, revealed that legalized recreational cannabis was a top contender likely to take over the space. Mrs. Mason confirmed today that cannabis is most certainly in the future of the Circus of Books WeHo space. Who will get to rent the space, depends on who gets a cannabis license in the City of West Hollywood this December.

Mrs Mason revealed that a going out of business sale at Circus of Books will probably happen in mid-December. “People are looking for us to discount our nail polish remover, or VCR head cleaners, or whatever you call them–our real special stuff, and we don’t really have to do that, because that’s what’s kind of keeping us going,” she said. “The bulk of our merchandize is already kind of discounted. We sell stuff that is previously viewed, or vintage and there aren’t many new movies being released for retail stores and there aren’t new magazines being sold for us to sell. Our shelves are full of old Playguy, Playbloy magazines, and previously viewed DVDs, so we’re just barely hanging on with our stuff. I would guess that our real getting rid of everything will start in the middle of December. Once I make this announcement, I will have to stop re-ordering some stuff. People are already seeing that the shelves are already emptying out.”

A sign is already up at Circus of Books WeHo stating that the space is cannabis compliant and that it’s a ground floor retail lease. According to Mrs. Mason, the map in the city of West Hollywood doesn’t allow cannabis to be distributed within certain feet from a park, a school, or near a church, and Circus of Books falls within the guidelines to sell cannabis.

“On December 7, I will know who the new tenant will be. I would say we need about a month to clear out. The two applications that I’ve seen, which is my tenant and my backup tenant, have beautiful drawings. I guess they’re going to have a lounge area with a dispensary. They just want the space and the bare walls to build whatever they need. They don’t need too much. They’re just going to make it look nice. I’m hopeful that if neither of these guys get a license, that somebody who does get a license will take this space. The license applications were expensive and nobody went into that casually. The people who contacted me initially are experienced operators and they worked very hard on their licenses. We had an architect doing drawings and the backup people are also have experience in operating and have beautiful renderings of what they would be doing.”

The Masons took over the Circus of Books WeHo lease in 1982. They have kept a low profile and are the subject of an upcoming documentary about the store, which is being made by their daughter, Rachel Mason.

“I don’t want the store to sit vacant,” she added. “I sort of want it have its next incarnation. I guess if there is no tenant, we could maybe hang on for a bit longer, but it would not be a good use of the space. I think cannabis use will bring many more people into the neighborhood and just be a profitable business. We’re done.”