A group of roughly forty people gathered on the front lawn of West Hollywood Park for a session of Black Lives Yoga at 10am this Saturday morning, September 19. The organization prides itself in merging collective healing and freedom fighting through the practice of resistance and yoga. The group was hard to miss in their uniformed black t-shirts with Black Lives Yoga in the front and the words, “…Anyway, arrest the cops who killed Breanna Taylor.” 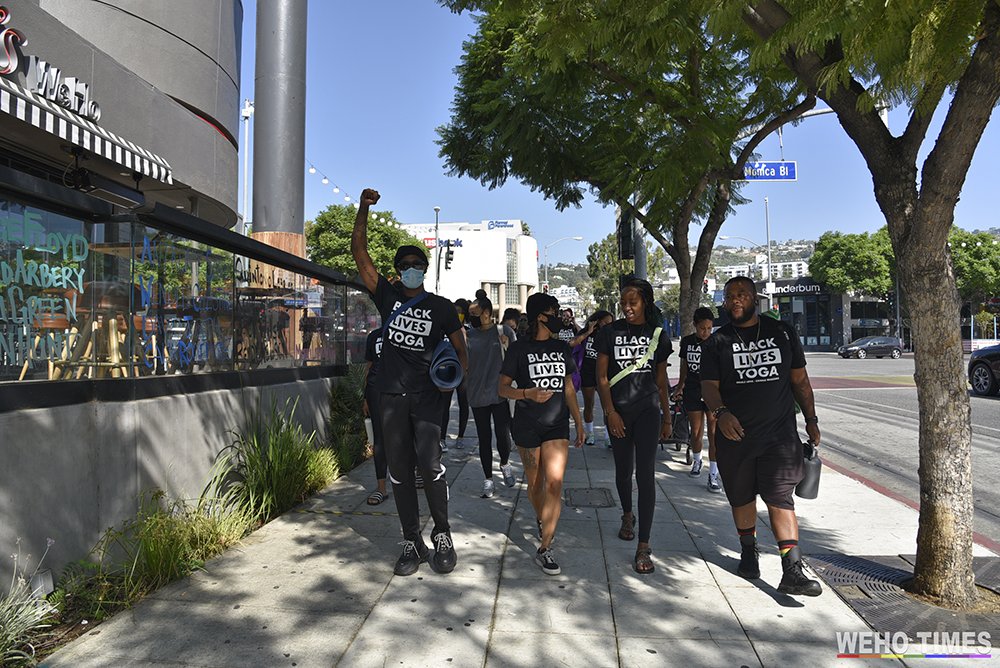 Everyone gathered on the corner of Santa Monica Blvd., and San Vicente Blvd., in front Rocco’s Restaurant and Bar. There was a prayer, followed by the chanting of Breonna Taylor’s name. The leader of the group read the names representing the Black victims who have lost their lives to police brutality which are scrawled on Rocco’s patio area. Then they all headed towards West Hollywood Park with yoga mats slung over their shoulders. One of the yogi protestors was carrying a stick of burning sage for effect.

“Black Lives Yoga is about inhale love, exhale resistance” one of the founders, Channing Mooreland, told WEHO TIMES. “It’s about prioritizing healthcare while still being active about our lives, our social justice and equality and all of those things. It’s about prioritizing ourselves and show others what it looks like to take care of ourselves while still being involved in the movement. It’s about merging our ancestral practice of freedom fighting, and resistance with our ancestral practice of yoga. We need to show people that we are taking care of ourselves so we can’t forget what we are collectively experiencing.”

Mooreland who came to West Hollywood from San Diego, hosted an event in San Diego on August 28 and she says the turned out really great. Black Lives Yoga will host other events in Oceanside, New Orleans and Oakland later this month.

The session was about an hour and a half. It was lead by yoga instructor Drew Muse.

To learn more, or to get your hands on one of those cool t-shirts, visit: https://blacklivesyoga.org/.

where are their god damned masks? i support the movement but not the trump like stupidity. i don’t care how far apart they are. the law is WEAR A MASK.

These people have no shame. They should use this energy and time to clean up POC neighborhoods (Crenshaw, Compton) vs doing yoga at a park and stopping at Cookies afterwards to get pot.

They should also use this down time to help locate their BLM member that shot the two LA cops.