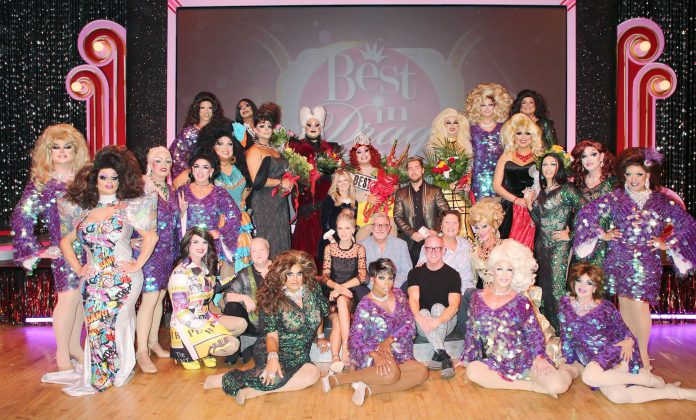 It’s that time again when five gorgeous gals (or the opposite of) compete for the crown and the title of Best in Drag Show, the over-the-top extravaganza benefiting Aid for AIDS, a program of Alliance for Housing and Healing. The show returns Sunday, October 6, 2019, to the Orpheum Theatre in downtown Los Angeles. 100% of the proceeds from the outrageous and legendary beauty pageant spoof help prevent homelessness and hunger for men, women, children and families living with HIV/AIDS throughout Los Angeles County.

The show, known for its outrages and overtop production showcasing unlikely drag queens, is known to attract celebrity guests and judges. This year’s festivities will open with Kathy Griffin getting things rolling with her take on what is happening in Washington D.C. and then turn the show over to Mistress of Ceremonies Kay Sedia. Celebrity judges include: Academy Award Winner Tatum O’Neil, Kathy Kinney (The Drew Carey Show) Performer Lance Bass, Lana Parrilla (Once Upon A Time), Arden Myrin (Orange is the New Black), Ever Carradine (The Handmaid’s Tale) and the five gorgeous gals compete for the crown in the hilarious and glamorous show directed and produced by Jeffrey Drew. This year’s contestants are Sean Clifford, Chris Hallisey, Eddie James, Gregory Marcel and Alexander Tarigo.

Curtain is at 7pm with a Pre-Show Party from 5:30pm at The Orpheum Theatre: 842 S. Broadway, Los Angeles.

Created in 1989 by Alexis Pittman and a small group of friends in his West Hollywood living room, the Best in Drag Show, then called Battle for the Tiara, came to fruition. The first event raised $400 collected from 20 people, and the show was subsequently moved to larger venues due to its increasing popularity. The current version of the show has run since 2003 and has raised over $6 million to support the work of Alliance for Housing and Healing’s flagship program, Aid for AIDS. The show is produced by an army of extraordinarily talented volunteers and staff from Alliance for Housing and Healing. This year sponsors include Michael Patrick King and Craig Fisse, Lifeguard, Dr. Serhat Gumrukcu, Wells Fargo Bank, Gilead Sciences, Barbara Jacobs Events, L.A. Care, Kraut Law Group, and Sketchers.

Alliance for Housing and Healing sees housing as a structural intervention against the spread of HIV/AIDS and as a platform for healthcare, and are passionate about providing a broad continuum of high-quality care to those living with HIV/AIDS that reinforces residential stability. Whether a group residence with 24/7 care for those who are too ill to live on their own, safe subsidized apartments for individuals and families with a second diagnosis, or emergency financial assistance to pay rent and utility bills for those who are facing eviction and homelessness, Alliance for Housing and Healing is dedicated to improving outcomes for low-income persons living with HIV/AIDS in Los Angeles County. For more information: www.alliancehh.org