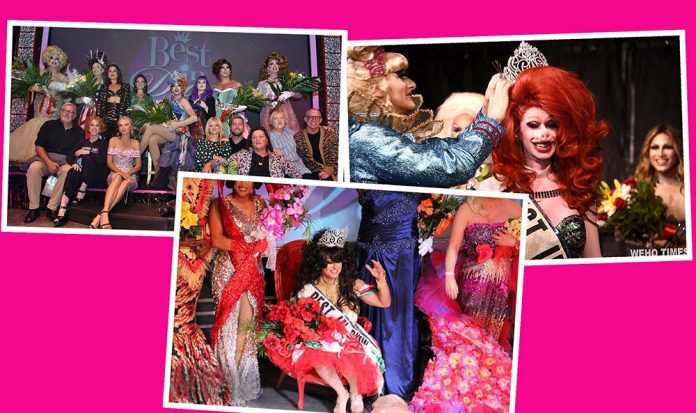 Who will be crowned Best in Drag? find out tomorrow, Sunday, October 2, 2002, starting at 7 p.m., as the Best in Drag Show fundraiser, benefiting Aid for AIDS, a program of Alliance for Housing and Healing, returns to the Orpheum Theatre in downtown Los Angeles. 100% of the proceeds from the hilarious spoof of beauty pageants help prevent homelessness and hunger for men, women, children and families living with HIV/AIDS throughout Los Angeles County.

Curtain is at 7pm with a Pre-Show Party from 5:30pm at The Orpheum Theatre: 842 S. Broadway, Los Angeles.

ABOUT BEST IN DRAG SHOW

Best in Drag Show fundraiser began in 1989 as Battle for the Tiara—a small annual party and AIDS fundraising event created by Alexis Pittman and a small group of friends in a West Hollywood living room. Each year it has grown in size and renown to become a not-to-be-missed event. No longer able to squeeze into a tiny living room, Best in Drag Show now attracts 2,000 people and takes place at the Orpheum Theatre in downtown Los Angeles.

The current version of the show has run since 2003 and has raised over $6 million to support the work of Alliance for Housing and Healing’s flagship program, Aid for AIDS. The show is produced by an army of extraordinarily talented volunteers and staff from Alliance for Housing and Healing. This year’s sponsors include Michael Patrick King and Craig Fisse, Kraut Law Group, Microsoft, and Henkel.

ABOUT ALLIANCE FOR HOUSING AND HEALING

Alliance for Housing and Healing sees housing as a structural intervention against the spread of HIV/AIDS and as a platform for healthcare. Alliance is passionate about providing a broad continuum of high-quality care to those living with HIV/AIDS which reinforces residential stability. Whether a group residence with 24/7 care for those who are too ill to live on their own, safe subsidized apartments for individuals and families with a second diagnosis, or emergency financial assistance to pay rent and utility bills for those who are facing eviction and homelessness, Alliance for Housing and Healing is dedicated to improving outcomes for low-income persons living with HIV/AIDS in Los Angeles County. For more information, visit www.alliancehh.org.