Moose and Squirrel, Rocky and Bullwinkle, came back home to the Sunset Strip in West Hollywood today, after being away for about 7 years. The spinning statue of Bullwinkle holding his friend Rocky, once again stands prominently on the corner where Sunset Boulevard splits into Holloway Drive. The intrepid duo were last seen on the Strip in 2013.

A giant crane lifted and placed the 14-foot, 700-pound likeness of Rocket J. Squirrel and Bullwinkle J. Moose on its pedestal this afternoon. Those lucky enough to be passing by were able to get a glimpse of the restored art installation before it was covered from public view. The statue is slated to have a proper unveiling ceremony at the end of March. 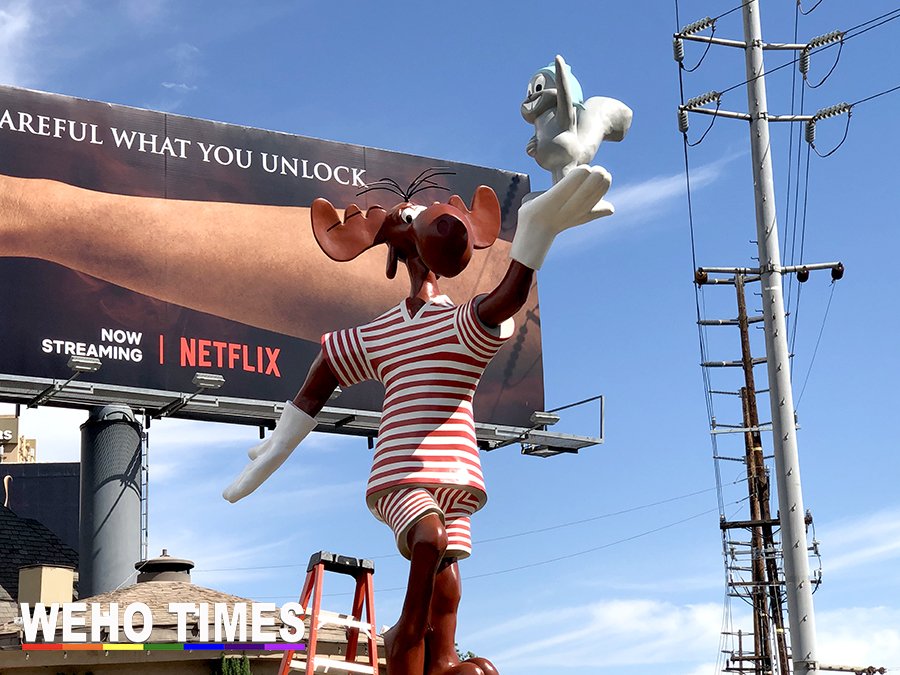 The Rocky and Bullwinkle statue dates back to 1961. The original artist is unknown, but it was restored by Ric Scozzari in 2014.

Squirrel and Moose were the stars of Jay Ward Productions’ most popular cartoon, “The Bullwinkle Show.” In 1961, on the day of the premier, a colorful statue of the two stars was erected outside the Jay Ward Productions’ offices on the Sunset Strip at 8218 Sunset Boulevard. The monument was built to parody a statue directly across the street — a bikini-clad, spinning showgirl on a billboard advertising the Sahara Casino in Las Vegas. It is believed the Sahara Cowgirl also inspired Gore Vidal to write Myra Breckenridge and was seen in its movie version starring Raquel Welch, seen below in a publicity still standing in the same pose. 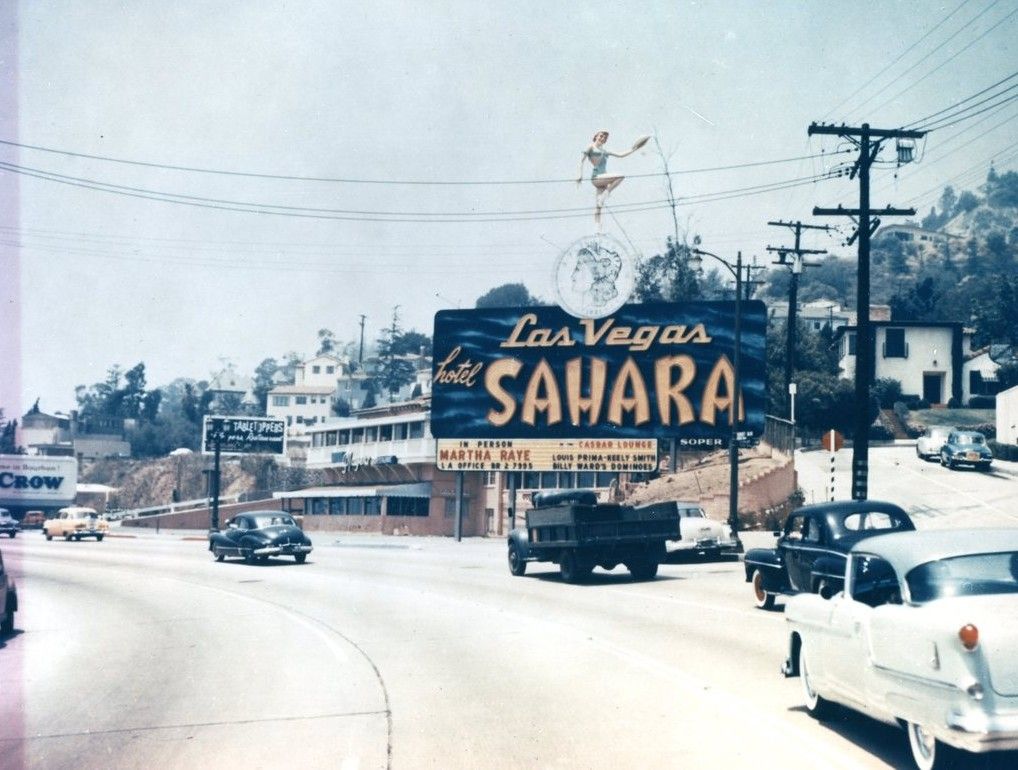 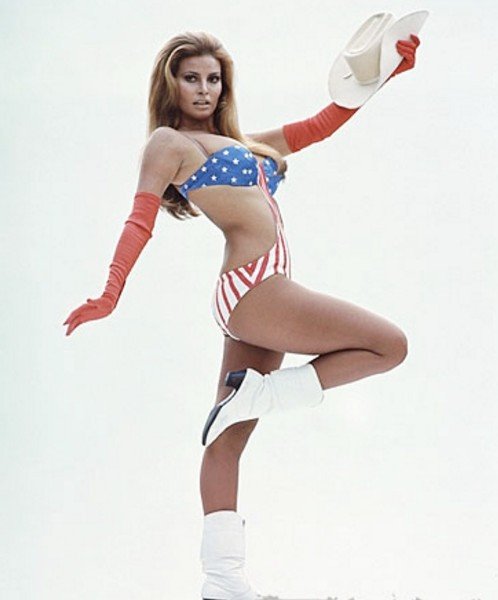 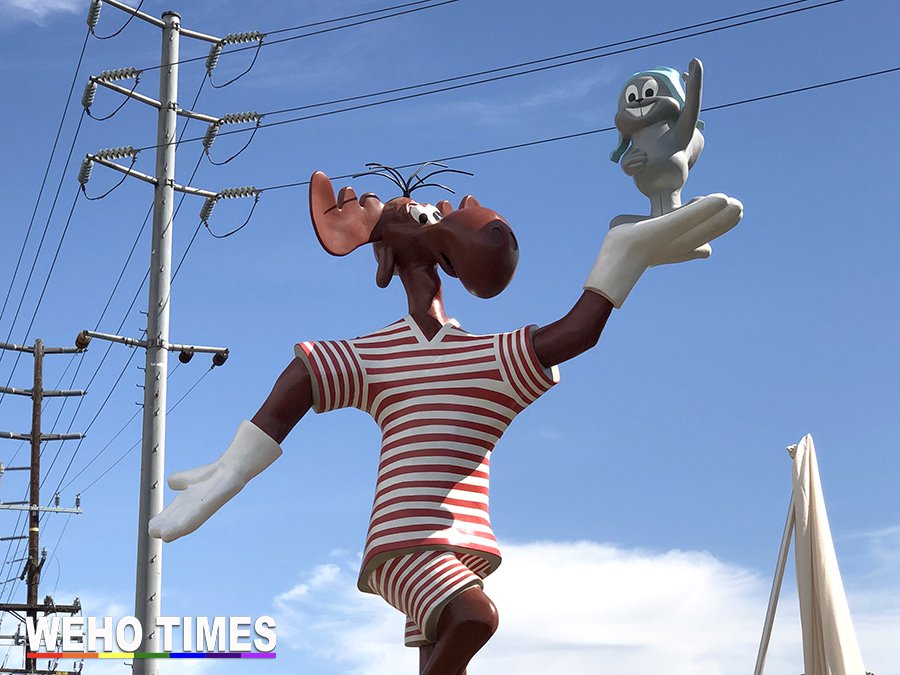 According to WeHo Arts, The run of Squirrel and Moose ended on Sunset Boulevard on July 22, 2013, when the statue was unexpectedly removed by a crane. Fans feared that Rocky and Bullwinkle had been lost forever, but in actuality, the statue was being restored by artist Ric Scozzari with funding from DreamWorks and Twentieth Century Fox. Later in 2014, the restored statue was unveiled as the center piece of “The Jay Ward Legacy Exhibit” at the Paley Center for Media in Beverly Hills.

In 2015, the Jay Ward Family gifted the Rocky and Bullwinkle statue to the City of West Hollywood for exhibition on the Sunset Strip. For a short time, the art work was exhibited in the lobby of City Hall before finding its permanent home at the intersection of Sunset and Holloway as an engaging historic and cultural monument. The statue is now a part of the City’s Urban Art collection. 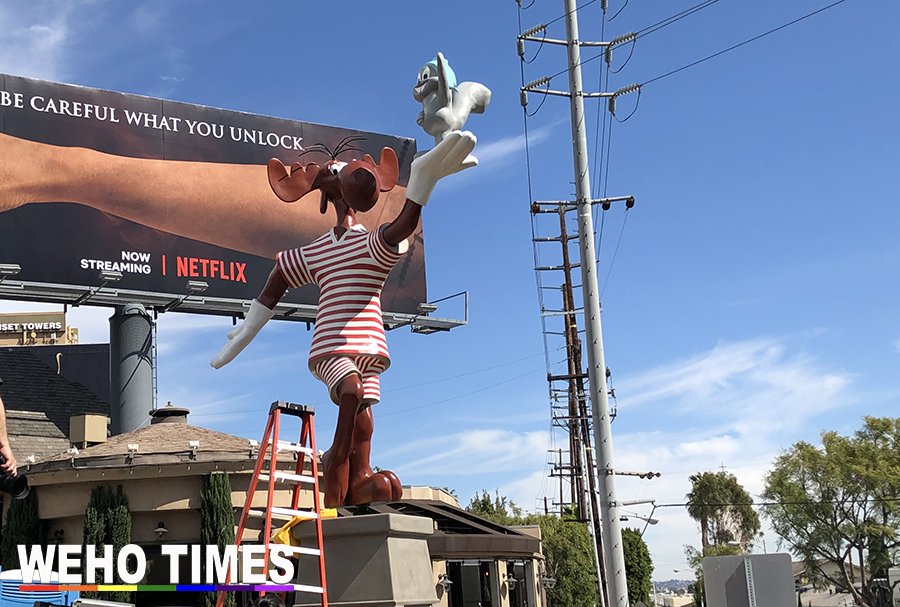 A date of the official unveiling has not yet been released.

It’s in a different location, right? Seems like it was where the 77 Sunset Strip building was located; somewhere near Dean Martin’s club.

I love this. Now, I would like to see a giant bronze Spicoli statue in the big fountain outside the Galeria.