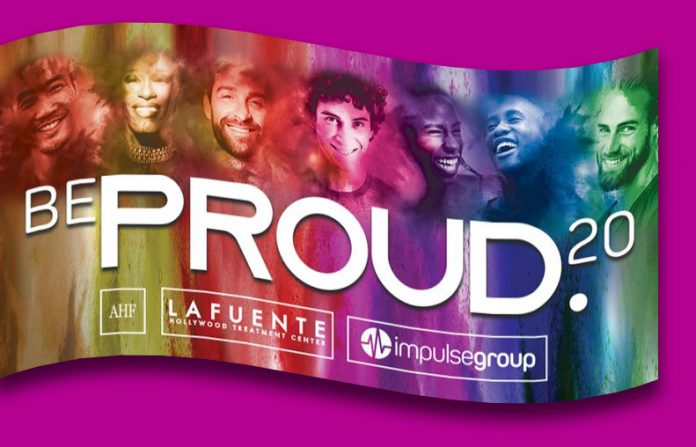 Impulse Group Los Angeles, AHF and LA Fuente Hollywood Treatment Center were scheduled to kick off LA Pride Month today with a BE PROUD 20 double-decker bus tour ride from Downtown Los Angeles to the heart of West Hollywood with the hopes to spread joy and make some donations to some non-profit organizations. BE PROUD 20 was postponed until next week, Sunday, June 7, due to the violent uprising during the calls for justice for George Floyd all over the greater Los Angele area.

“In light of everything that’s happening in the city and throughout the country in the fight for social justice, La Fuente Hollywood Treatment Center, Jose Ramos at Impulse Group and AHF have made a decision to postpone the BE PROUD bus tour until next Sunday, June 7. The intention of Be Proud bus tour is to bring joy to this city as well put a few donations into organizations that we believe are in need and are worthy. We will keep you posted on this event next Sunday and everything that we have coming up at La Fuente. Thank you for the support that you always lend and remember, be safe, reach out to one another and always, always fight for justice.”

“In light of yesterday’s protests throughout the city of Los Angeles, we have decided to postpone today’s event outside of Roccos in West Hollywood,” Impulse Group stated via a press release. “Pride parades started as a protest – remember Stonewall. We stand in solidarity with the Black Lives Matter movement and all allies in the fight against racism and injustice.”

BE PROUD 20 was scheduled to kick off with a colorful double-decker bus leaving Los Angeles City Hall in Downtown Los Angeles. It will travel through Echo Park, Silverlake, Hollywood and end in West Hollywood outside of Rocco’s by the rainbow crosswalks. The BE PROUD 20 bus will be hosted by festive representatives from each organization, City Officials, community stakeholders and some of Los Angeles’s most fabulous drag performance artists.

The BE PROUD 20 will broadcast will most likely be broadcasted on Facebook Live. Details to come.