The City of West Hollywood kicked off the City-Census 2020 campaign at the beginning of the regular City Council Meeting this week with a goal to get every resident counted.

The city unveiled the official poster at the meeting. City Staff will working collaborative with Census personnel, and the city will host a meeting of the Complete Count Committee in a matter of weeks. The community is being encouraged to join the effort and become a City Census Ambassador.

“The census is a snapshot of our community,” Mayor Pro-Tempore Lindsey Horvath stated at the meeting. “As they say, if you are not counted, you don’t exist. And if you don’t exist, the federal government assigns fewer resources to your community, to our city of West Hollywood. The non-partisan legislative office of California estimated that during the 1990 Census, California’s population was undercounted by 2.7 percent. This undercount likely resulted in California receiving at least 2 billion dollars less in Federal funds than we deserved. 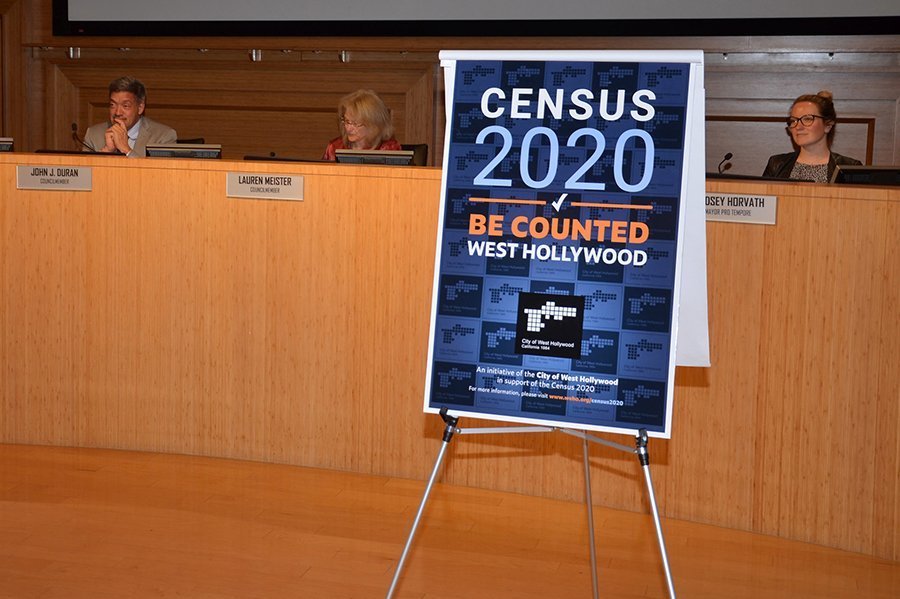 Photo provided courtesy of the City of West Hollywood. Photo credit: Richard E. SettleThe next census will take place on April 1, 2020. The United States Constitution mandates that a complete population count be conducted every 10 years.

The City of West Hollywood will play an active role in mobilizing community members to take part in the census and educates local residents and stakeholders about the need to participate in the census and return the questionnaire.

The census is a large and logistically complex undertaking. It provides critical data that helps the City of West Hollywood run effectively and helps ensure that West Hollywood receives a fair share of federal funding and investments. In addition, the census count determines apportionments among the states for the U.S. House of Representatives.

The City of West Hollywood has consistently supported legislation that requires the Census Bureau to count every person living in the United States, independent of their immigration or citizenship status.

Census staff projects that certain West Hollywood census tracts may have a moderately low response rate. This is based on data from the 2010 Census and from regular surveys.

Federal funding to states, generally speaking, is determined based on population counts. Improper accounting of California’s population or “undercount” may lead to reduced allocation of resources in the years ahead.

As a community of just 1.9 square miles, the City of West Hollywood is working to achieve a complete census count in Census 2020.

With its Complete Count Committee (CCC), the City of West Hollywood will work to increase responsiveness in the 2020 Census utilizing local knowledge, influence, and resources to promote the census through locally based, targeted outreach efforts.

The census is a violation of privacy and it’s all about pushing around corrupt money.
It’s none of your business what my gender, sexuality or race is. I thought we were supposed to see through all those divisions but instead they force you to answer questions that is simply no one’s business at all.