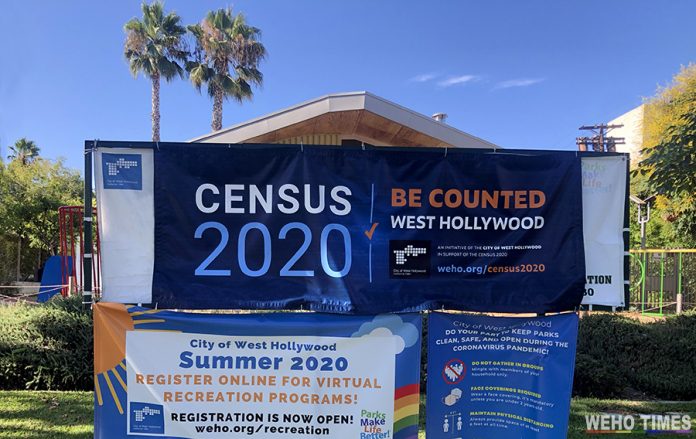 Community members who have not yet completed the Census can do so quickly and easily in approximately five minutes at: https://census.ca.gov/. This year, for the first time, the Census form is available to complete online in 13 languages. Community members can also respond by phone in one of 13 languages, including by Telecommunication Device for the Deaf, at one of the phone numbers listed on the California Census 2020 website: https://census.ca.gov/2020/03/12/californians-receive-invitations-to-participate-in-2020-census/.

Census staffers have started to work in the field and are currently knocking on doors in the City of West Hollywood and in communities across the nation to follow up with households that have not yet responded to the Census and are there to help. To learn more about how to identify a Census worker, click here. Your Census responses are safe and secure. Information collected as part of the 2020 Census cannot be shared with or by other governmental agencies or used against you in any way.

The United States Constitution mandates that a complete national population count be conducted every 10 years. The 2020 Census will decide how billions of federal dollars are distributed in California. An undercount could impact funding for schools, health services, child care, emergency services and many other programs. The Census will also decide the number of California’s Congressional members and Electoral College votes. A complete count means more people in power who truly represent and advocate for our communities.

“Federal funding that is allocated to governments, states, counties and cities is done by a population count assigned to each Census track,” Hernan Molina, the City of West Hollywood’s Governmental Affairs Liaison, told WEHO TIMES. “When a state doesn’t have an accurate population count–an undercount–not only does the state not get enough money, but when a portion of congressional seats take place, that is also a problem. It’s estimated that California could lose one congressional seat, maybe two. Obviously we don’t want that to happen. This is why cities like Los Angeles, West Hollywood, Beverly Hills, they’re all working to make sure every resident participates.”

The nonpartisan Legislative Analyst’s Office (LAO) in California has estimated that during the 1990 Census, California’s population was undercounted by 2.7 percent; this undercount likely resulted in California receiving at least $2 billion less in federal funds. There are, however, other impacts beyond reduced financial resources: according to the LAO, the 1990 Census undercount was severe enough that the State of California was shortchanged one Congressional seat. Census staff has projected, based on data from the 2010 Census and from regular surveys, that certain West Hollywood census tracts may have a moderately low response rate. As a community of just 1.9 square miles, the City of West Hollywood is working diligently to achieve a complete census count in Census 2020.

The City of West Hollywood has consistently supported legislation that requires the Census Bureau to count every person living in the United States, independent of their immigration or citizenship status and the City has strongly advocated for the importance of including questions about sexual orientation in order to help identify LGBTQ people and families and safeguard their rights and responsibilities.