The City of West Hollywood was in for a treat when the Baby Trump Tour made a brief pitstop in WeHo this past Saturday. The giant 20-foot high Trump Baby blimp is doing a tour across the country with several stops in Southern California. The bloated caricature of an angry orange man baby with tiny hands and a cellphone, floated over Weho Park for approximately 90 minutes.

Activists inflated the Trump baby balloon in Los Angeles , ahead of a politically-themed convention. The large balloon was erected at the Los Angeles Convention Center, prompting people to stop at take pictures. Mayor Duran was there to take part in this historical moment and he pulled some strings to bring the balloon to WeHo with a message to get out the vote, November 6. 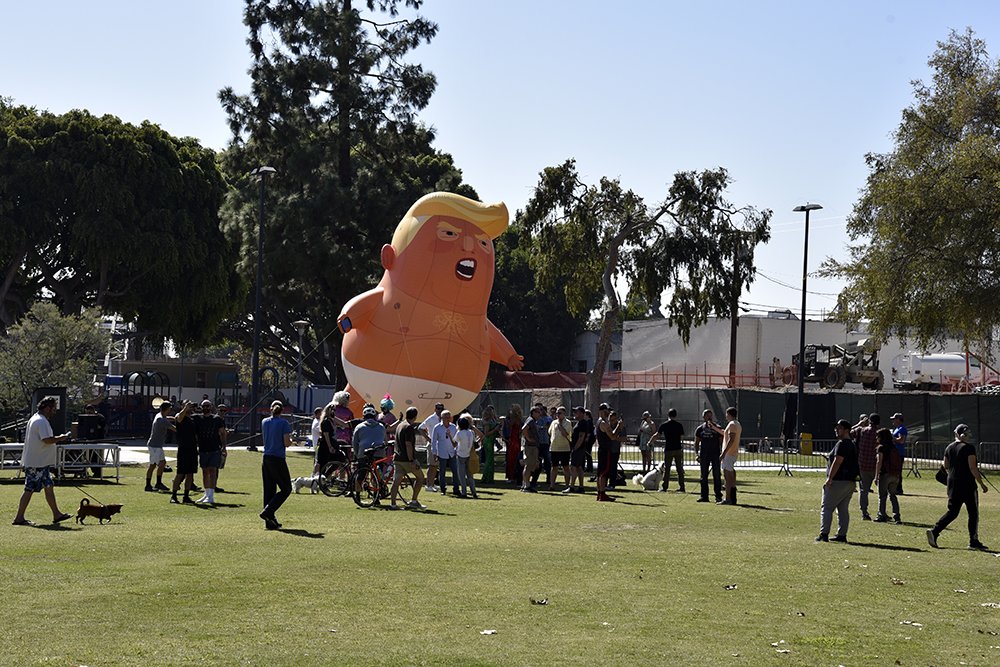 The turnout was not as a large as expected, most likely due to the short notice, which didn’t allow much time to promote the giant baby’s visit.

Mayor Duran and WeHo Council member Lauren Meister were present at the event to answer questions, and drag entertainers Baex Jing, Cookie, Anastasia DeTwat and Jasmine Flowers were there to entertain and take pictures with those in attendance. 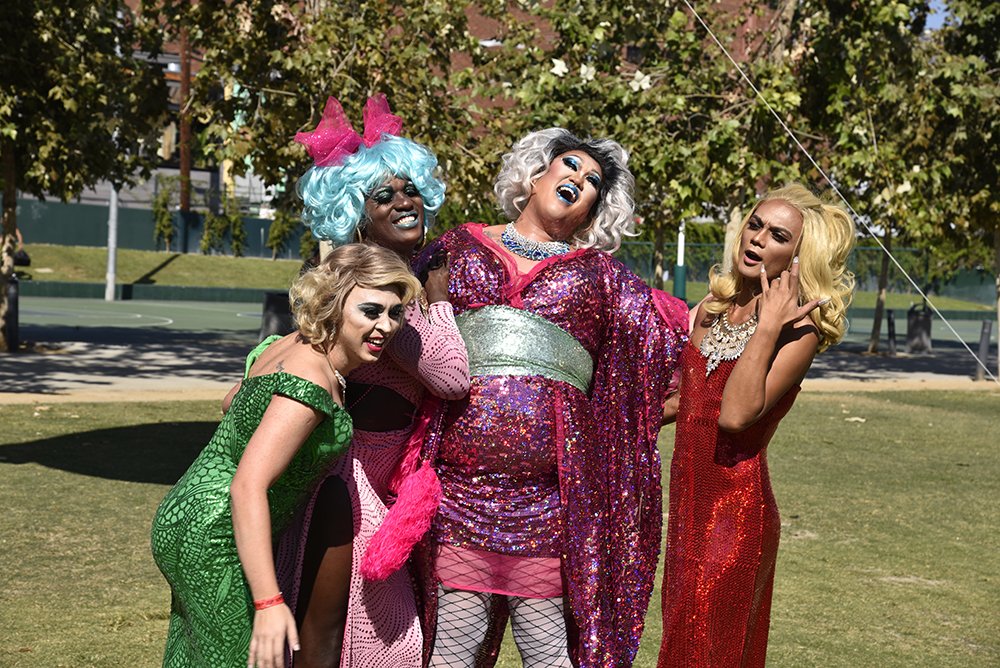 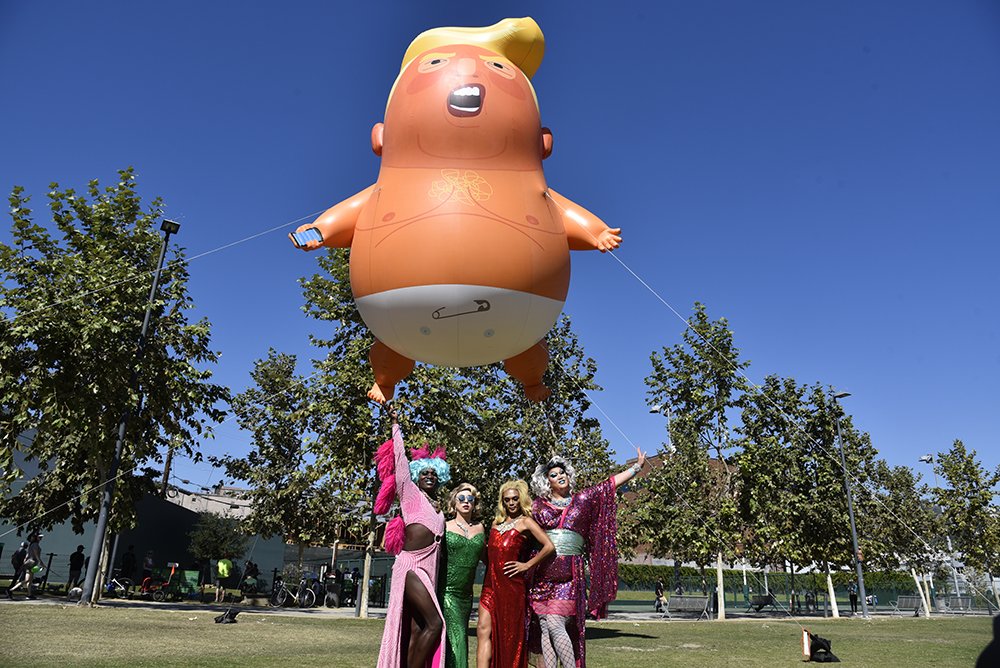 “Baby Trump Tour is taking six of these around the nation right now,” Jed Pauker told WEHO TIMES. “Everyone loves it, except for the people who are so embedded in Trumpism that they look at it and they lose their sense of humor. It’s sad that we have leadership in this nation that fails to lead. What leaders should do is bring people together.”

According to Paulker, the city of West Hollywood was a city of choice. “We are taking him out in West Hollywood, because West Hollywood is a civil rights city,” he said. “The city has been very welcoming to us and it is an appropriate place for us to fly Baby Trump today. West Hollywood’s history and growth has the most to do with diversity. We talk about that a lot in Los Angeles proper, but the government of West Hollywood represents all the principles of diversity, as well as equal rights. When we brought our representation of the party spirit to West Hollywood out today, the colors were amazing.” 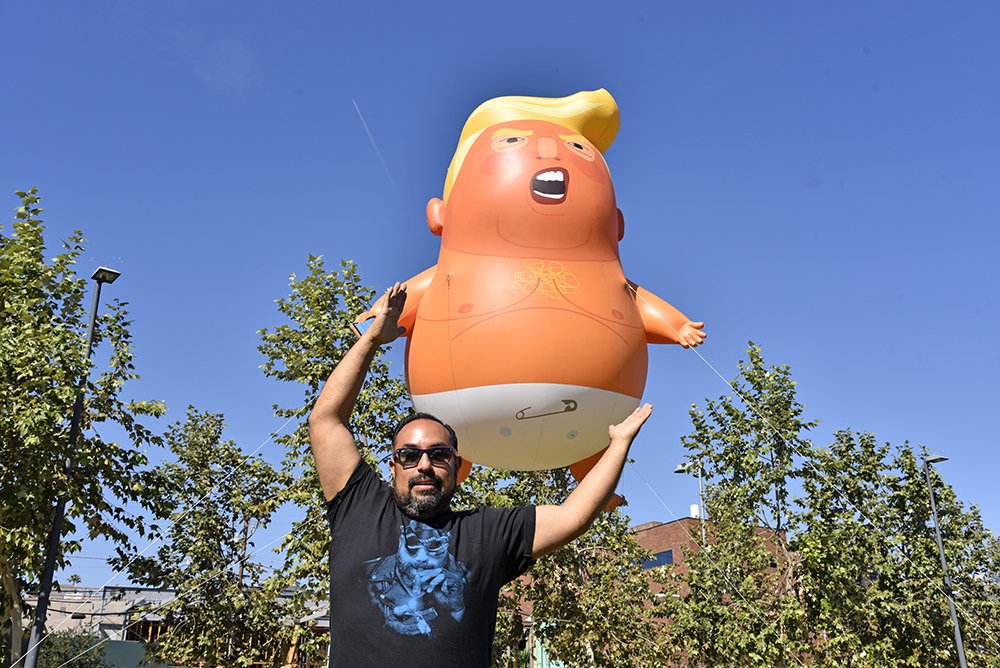 The Baby Trump Tour is sponsored by People’s Motorcade, a grassroots organization that’s known for bringing the resistance to the front doors of several Trump properties. They are the ones behind the projected messages on Trump buildings. The purpose of the Motorcade is to voice opposition to the Trump administration and all that it stands for. They did this by motorcading in front of Trump National every Saturday during the Summer whether he was there or not. The People’s Motorcade and its participants have held multiple actions in Bedminster, New Jersey such as the “March for Truth”, “Rally for Women’s Rights” and “No Hate in the Garden State”.

People’s Motorcade Founder Jim Girvan created six Trump Babies modeled after the original that was created in the UK. The Big Baby Trump Balloon was born during Trump’s official visit to the United Kingdom. The inflatable caricature of Trump was flown in protest of him, his visit, his racial views, his history of sexual misconduct, and his policies. The original was made possible through the generous efforts of a large crowdfunding campaign on crowdfunder.co.uk, which helped raise the GB£16,000 it cost for its creation and deployment. 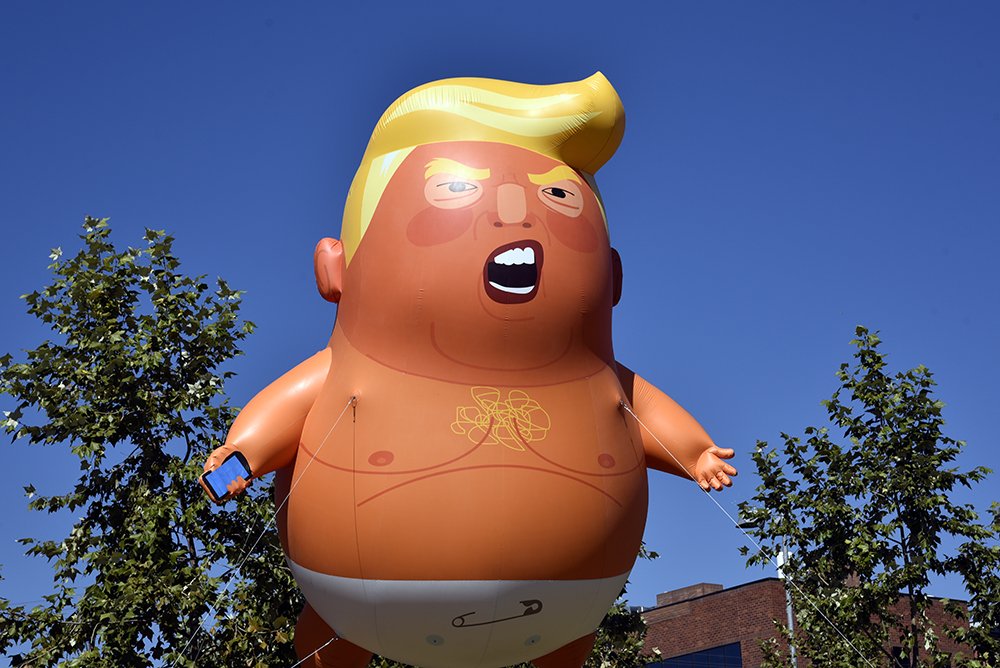 To learn more about the People’s Motorcade, visit https://peoplesmotorcade.com/.