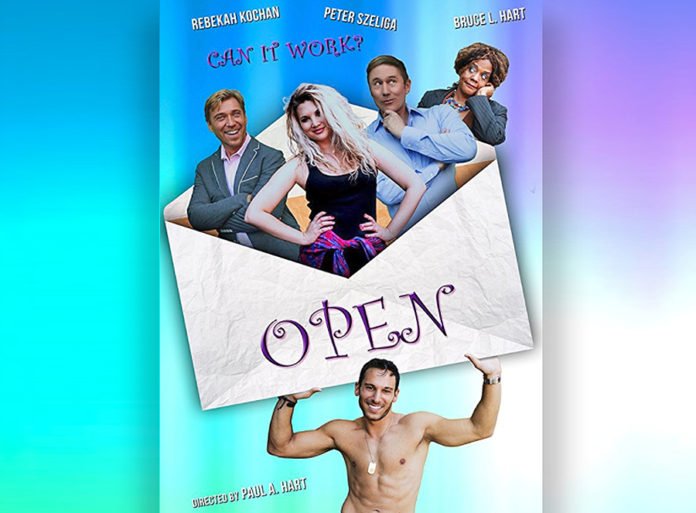 Open is about David and Kyle (played by Bruce L. Hart and Peter Szeliga), a happily married gay couple who survived the seven-year itch of their marriage completely monogamous, only to hit their 10-year anniversary and find themselves asking if they could “open” their relationship to other men. Being in an open relationship seems to work well for their coupled friends Richard and Mark (played by Leon Acord and Brian Nolan), who have been able to draft an elaborate set of rules that allows them to have umm… “relations” with other gay men.

From creating online profiles, trolling sex apps and going on some really bad dates, the results for David and Kyle’s newly found openness are calamitous, sometimes poignant and often hilarious in this very up-to-date 1960s romp.

The couple seem to have a cheerleader Kyle’s hard-partying sister Gabby (Rebekah Kochan), who is exploring her own interest as a bisexual woman with equally comedic results.

Rounding out the cast is the sage interior decorator Margaret (Shaun Landry), an out and proud lesbian who is definitely NOT in favor of their open status.

The film is directed by Paul Hart. Guest stars include some familiar and gay favorites like Dante, Drew Droege, Jason Stuart, David Pevsner and Ron Jeremy (yes, THAT Ron Jeremy).

“The movie has been very popular,” writer, producer and star of Open, Bruce L Hart, tells WEHO TIMES. “I’m impressed. It played all the LGBTQ film festivals. It won two awards; Best Comedy and Best Feature, and now that the festivals are done, it’s out on DVD on Amazon, and the DVD is selling really well.”

According to Hart, the movie was inspired by a writer friend of his. “Two and half years ago, I was at a cocktail party talking to Pat Tobin who is the screen writer for the movie Cake, starring Jennifer Anniston,” he sad. “Pat told me, ‘You know I really liked your movie Home Wrecker. You should team up with the guy that played your husband and do a bedroom comedy that explores open relationships.’ I thought he was on to something. From there, my brother and I worked on a script.” “We hit a few speed bump when we started writing it over two years ago,” he added. Prop-8 was voted in and we thought, ‘We can’t do a comedy about two guys who are monogamous and now want to be open. People will be outraged, because of this law that says gays can’t get married!’ As soon as marriage became legal in all 50 states, we felt we were open to explore. From there, we workshopped it. And by that, I mean that we assembled it, and read it, and tooled it, and got feedback, and read it again. It took quite a while to get it finished.” To purchase Open on DVD, click on the Amazon link here: a.co/1vw7B5R

For updates and more information on this romantic gay comedy, visit the film’s Facebook page at facebook.com/Openthegayfeaturefilm/