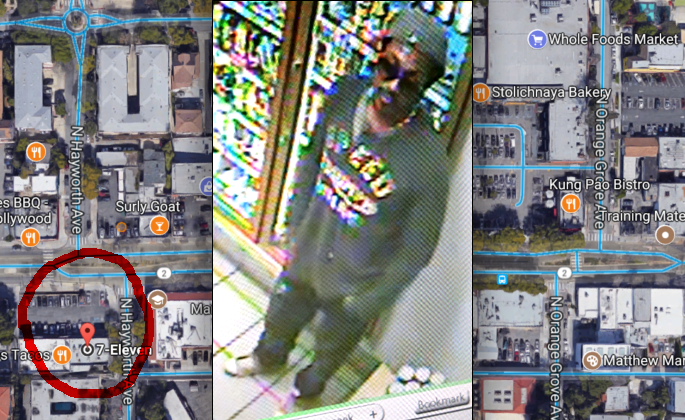 LASD – West Hollywood Station, Los Angeles County Sheriff warned residents to stay indoors and avoid the area of Fairfax Ave and Fountain Ave / Orange Grove Ave and Fountain Ave, due to police activity. K9 was deployed, there was police helicopter activity, and a diversionary device was used that creates a loud sound to disorient the suspect.

According to the Los Angeles County Sheriff’s Department, the victim confronted the suspect who was trying to steal items at the 7-Eleven. He was then attacked outside of the store.

“The person apparently saw the man trying to steal items from the store and confronted him,” police told KTLA5 News. “The man then left the store. The victim continued shopping and walked out the front door, when the man was apparently waiting outside and attacked the victim with an unknown blunt object”

The attack occurred around 4:30am. The victim was taken to the hospital. The containment action concluded at 9am.

West Hollywood Sheriff’s Station released the image above of the suspect wanted for assault with a deadly weapon. Deputies are investigating the circumstances surrounding an “Assault with a Deadly Weapon” call which occurred in the 7900 block of Santa Monica Boulevard, West Hollywood, at approximately 4:05 a.m. today.

This suspect should be considered ARMED & DANGEROUS. If you believe you have seen the suspect, DO NOT make contact. Please call 9-1-1 or West Hollywood Station at the number listed below.

Responding deputies have learned the suspect, (in the above picture), was stealing items from the location when the victim offered to pay for his items. The suspect became upset, refused the victim’s offer and a struggle ensued. As the victim left the location the suspect pulled out an axe and began to hit him in the head several times. After the assault, the suspect fled the location heading northbound on Hayworth Avenue and out of view.

There is no additional information available at this time.

“If You See Something, Say Something”
LA Crime Stoppers: Partner to prevent or report crime by contacting your local Sheriff’s station. Or if you wish to remain Anonymous, call “LA Crime Stoppers” by dialing 800-222-TIPS (8477), texting the letters TIPLA plus your tip to CRIMES (274637), or using the website http://lacrimestoppers.org