Venice Beach artist, Joel Shields, is back at the West Hollywood Sheriff’s Station with his colorful rays of yarn art installation at San Vicente Boulevard near the corner of Santa Monica Boulevard. His latest rogue creation wraps yarn around two trees to create perfect lines of color suspended in air. The latest installation is currently still visible as of the publishing of this piece.

“My installations are kind of like holding open a door for someone who isn’t even there,” he tells WEHO TIMES. “I’ve done four of these in the park, but recently read the posted rules and don’t want to run afoul.”

The trick to this form of guerrilla artwork is seeing how long it lasts. He says the most he’s had one standing has been for about three months in Venice Beach. “Some last weeks,” he said. “Others don’t last the night. Only measurements I ever note is distance between trees and the amount of time they take.”

He called the the most recent art installation, which is very much intact after a week, “a testament to the citizenry that is West Hollywood.” He says there is no political agenda behind his work or any form message regarding sheriff deputies.

The yarn art debuted by the Venice Boardwalk and at Abbot Kinney. The work first popped up at the West Hollywood Park during pride month in June, 2022. He used the colors of the rainbow for two creations on the park walkway next to the big dog park and the small dog park. He didn’t ask permission from the city, but the yarn survived the elements and the people before finally being taken down after about fours day later.

His had an installation in front of the West Hollywood Sheriff’s station in July of last year as well. 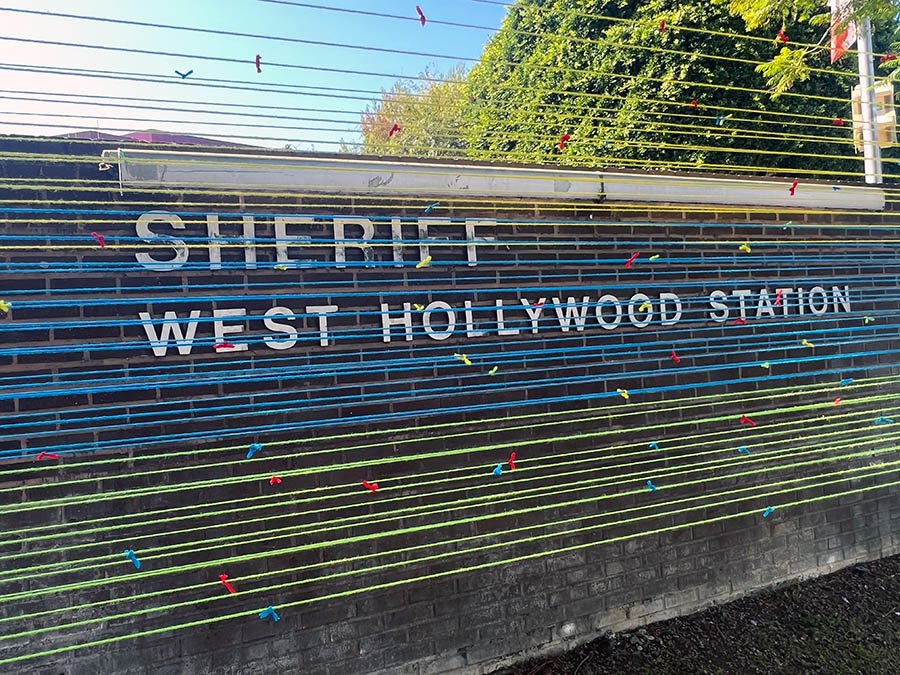 Joel Shield has art all over the Venice Boardwalk near his home. He uses bright colors of the rainbow, Barbie dolls, flags, umbrellas, chairs and whatever the city elements throw his way. He brought colorfully panted wooden shows to West Hollywood last year for WeHo Pride.

The yarn looks like a fun thing that the city can get behind. I think Mr. Shields should look into getting a artist permit and grant to be legal and get support for more permanent displays.

Bicyclist on the sidewalk instead of using the empty Bike Lane. I’m just sayin.

That’s quite a yarn yur spinning