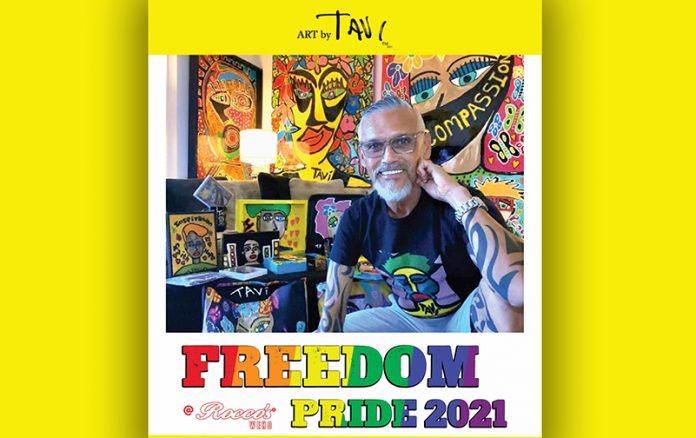 Art by Tavi is partnering with Rocco’s WEHO to launch “ A Season of Giving”–a six-month series of events designed to create multiple platforms to give back to people in need. The launch event, FREEDOM, Pride 2021, is set for June 22nd during Pride Month. FREEDOM is the brainchild of Gustavo Arellano and Michael Rothschild. 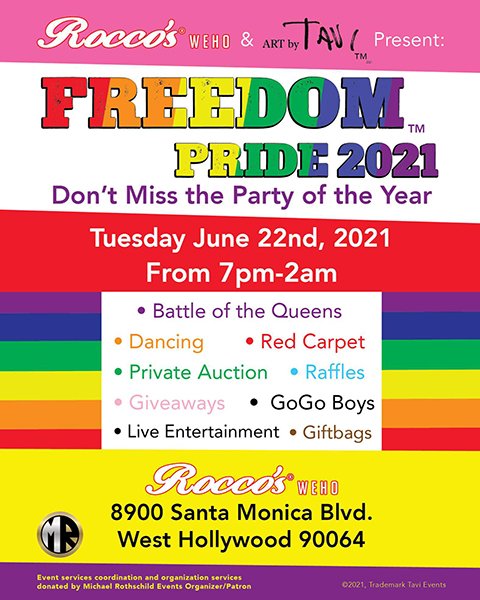 The first event begins at Rocco’s with an all out Hollywood style, red carpet, step and repeat, photographers and red stanchions. There will be a pop up art gallery, which will lead into the color is freedom themed space. Think of circuit party meets fundraiser, allowing
everyone to party and support charity.

The open area at Rocco’s will include Male GoGo dancers with broken chains, signifying the
theme FREEDOM, which was derived from the sense that we all are finally free of the
devastating effects of COVID.

The front VIP area, will be open for bottle service, and if loud music is not your thing, then
guests can head back to Rocco’s Paradise, and attend an old school battle of the legendary and up and coming drag performers as they compete in various categories for Face, Realness, Butch Queen, Pretty Boy Butch Queen, Couture and VOGUE. The winners will be awarded a 1st, 2nd, and 3rd place prizes. There will be special guest entertainment, a special award will be given to The West Hollywood Sheriff’s Department for their efforts during COVID. After which a guest speaker and video from The Elizabeth Glaser Pediatric AIDS Foundation will segue into the auction.

Art by Tavi are works of art from the mind and dreams of Gustavo Arellano. Arellano is an artist and businessman who also gives back to his community through The Arellano Project. Rocco’s WEHO is a known supporter of the West Hollywood community. Michael Rothschild Events is donating its time and resources, and acting as both a patron of The Foundation and Mr. Arellano.

To learn more about Art by Tavi visit: https://www.arellanogustavo.com.

Wow amazing event for a great cause. So much love put into this.

Wow ! That looks like an event not to be missed!!! Hope I can get in! Looks like a fun time and an amazing amount of love put into this gala ! Plus I absolutely love Tavi art !

ABOUT US
WeHo Times West Hollywood Daily News, Nightlife and Events. The WeHo Times is an online news source covering the life and times of the City of West Hollywood. Featuring unbiased professional reporting and photo journalism, WEHO TIMES is updated daily, delivering the latest city news. The online publication founded in 2017, also features cultural events, people, politics, places, nightlife, and the history that make the City of West Hollywood the unique, creative city we all know and love.
Contact us: editor@wehotimes.com
FOLLOW US
© 2022 Murillo Media, LLC
wpDiscuz
5
0
Would love your thoughts, please comment.x
()
x
| Reply