ARENA: A House MUSIC-al Takes Us Back to Arena Nightclub, 90s Style

ARENA: A House MUSIC-al takes us back the days of house music in the 1990s at the legendary ARENA Nightclub in Hollywood, CA, a hop, skip and a bump from the West Hollywood Gateway on Santa Monica Boulevard. This original musical experience brought to you by Teatro Nuevos Horizontes (TNH)Productions, CASA 0101 Theater, El Centro Del Pueblo and Councilmember Gil Cedillo, was recently extended through July 31, 2022, at CASA 0101 Theater located at 2102 E. 1st St., Los Angeles (tickets available at (https://casa0101.org/shows).

ARENA:  A House MUSIC-al is the brain child of Abel Alvarado who tells his life story through original musical numbers and stripped-down classic house song of the 90s. It is a coming of age story that follows Lucio Torrez, a young music minister at his father’s Apostolic church, who gets caught in the act with his closeted boyfriend and is sent to a sexual conversion camp to pray the gay away, but thanks to the help of some friends, Torrez eventually finds himself at the footsteps of the Arena Cafe Nightclub.

Those of us who experienced Arena Nightclub are transported back to what it was like walking through those double doors and seeing mostly young gay men of color dancing to techno and house music at the two-story dance club. There were the voguing battles on the dance floor; the fashion shows on the catwalk; the chola fights; the bumps of meth; and then there were visits to The Zone sex club down the street after the last call for alcohol. It all happened during the days of Arena Nightclub and Arena: A House MUSIC-al takes us there through this musical journey.

What is so enjoyable about this musical are the believable and lovable characters. We knew a Lucio, a Jerry and a Ms Martin back in the 90s. We laughed, and partied, and fought with them. And some of us lost some of these characters to AIDS during that time as well.

“In 1990, Madonna’s Vogue was on top of charts,” said Abel Alvarado before showtime on Sunday, July 3rd. “The Iraq war was happening. MC Hammer pants were really in. And I was a senior at Baldwin Park High School in Baldwin Park California, which is about 25 miles east of here. I kept hearing about this place that was opening on Santa Monica Boulevard in Hollywood, and if you lived in the San Gabriel Valley in the 1990s, Hollywood might have been in another world. That was a trek.”

Alvarado shared about when he first realized the new Arena Nightclub was gay. “But I was not gay,” he said. “I was artistic. I played the piano. I loved music. I loved theater. I loved fashion. I loved Madonna. When I finally made it through those double doors and walked onto that huge warehouse dance floor, I saw a sea of brown gay, lesbian, trans, drag queens–everything, and I said ‘Wait! We’re not gay.’ And the crowd I was with said, ‘Yes, we are. And so are you.’ I then realized, I’m not just artistic, I am gay.”

There were are so many standout performances in this show, but my personal faves, aside from the obviously super talented Preston Valle in the lead role as Lucio (we’re talking triple threat coming at you with good looks, acting and singing), I really enjoyed Caleb Green as Jerry (we all so know this guy), Matthew Noah as Ms Martin, the beautiful and super talented Obinne Onyeador as Suzen, and I loved, LOVED, Cassie Alcoser and his juicy take as Erik, the sneaky, conniving, high-pitched, limp-wristed Pray-Away-The-Gay camp counselor (you want to hate him, but you’re too busy laughing). 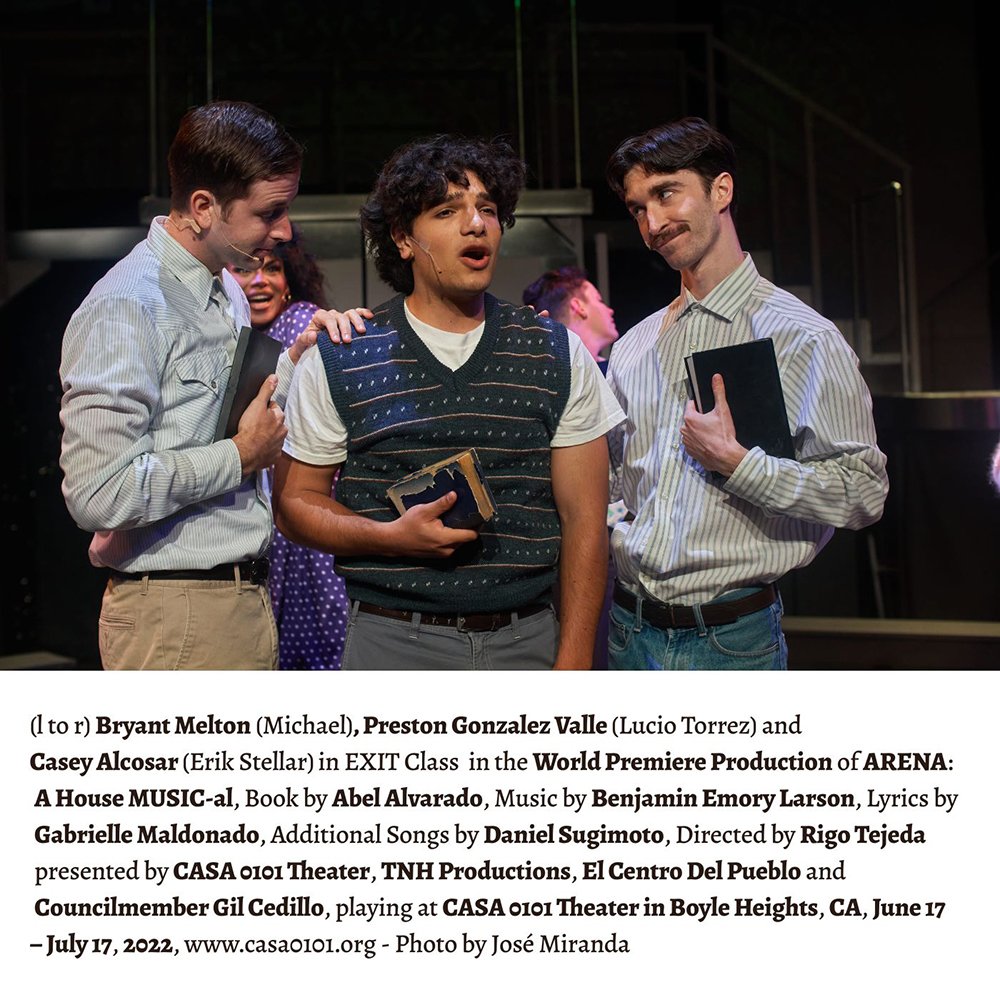 This is the last chance to catch this show. Tickets are $35 per person for General Admission; $30 per person for Students and Seniors; and $25 per person for Boyle Heights residents with ID and $75 for VIP tickets. The show is recommended for ages 17 and older. The show is in two acts, with 32 musical numbers, and has an approximate running time of 150 minutes, which doesn’t include intermission.  Advance reservations are encouraged.

Free Parking is available on several streets surrounding the theater.  Free parking is also available on Fridays and Saturdays only at the Boyle Heights City Hall Parking Lot located at 2130 East First Street (at Chicago Street) by entering the lot from Chicago Street; the lot is closed on Sundays.  Metro Gold Line train stations are located on First Street in Boyle Heights at both Soto Street, and at Boyle Street (Mariachi Plaza), within a short walking distance to the theater.