Anti-Vaccination Protest Returns to Harlowe Restaurant and Gets Violent 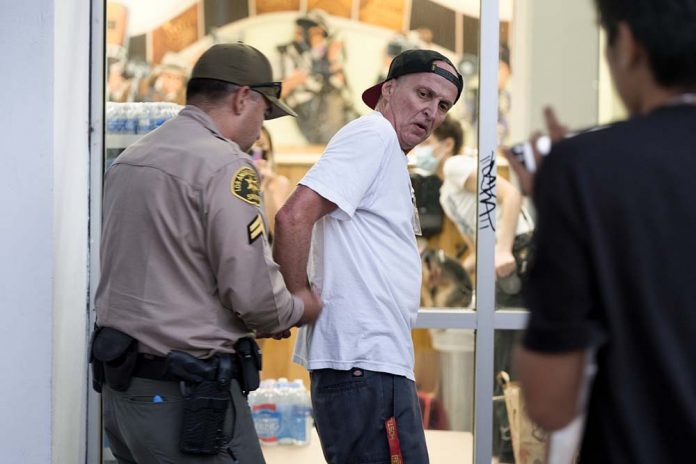 The anti-vaccination protest was back at the doorsteps of Harlowe yesterday evening, Wednesday July 28, 2021. Right wingers are outraged over the restaurant’s freedom to choose a safety policy requiring proof of vaccination or a negative COVID-19 test result to enter their premise. The second night brought more hostility, which escalated into violence, forcing sheriff deputies to detain four individuals.

The group returned for a second night with their brand of aggression and anti-semitism, once again comparing a vaccination mandate to the Holocaust and at one point chanting, “No Nazi Restaurant! No Nazi restaurant!”

They pulled out the Trump protest classics like singing Bob Marley’s “Get Up Stand Up (for your rights).” In fact, a large number of the protesters were fixtures at the Pro-Trump demonstrations in Beverly Hills last year, and have a reputation for being hostile. With Trump out of office, they replaced their pro-Trump MAGA signs with COVID-19 conspiracies. 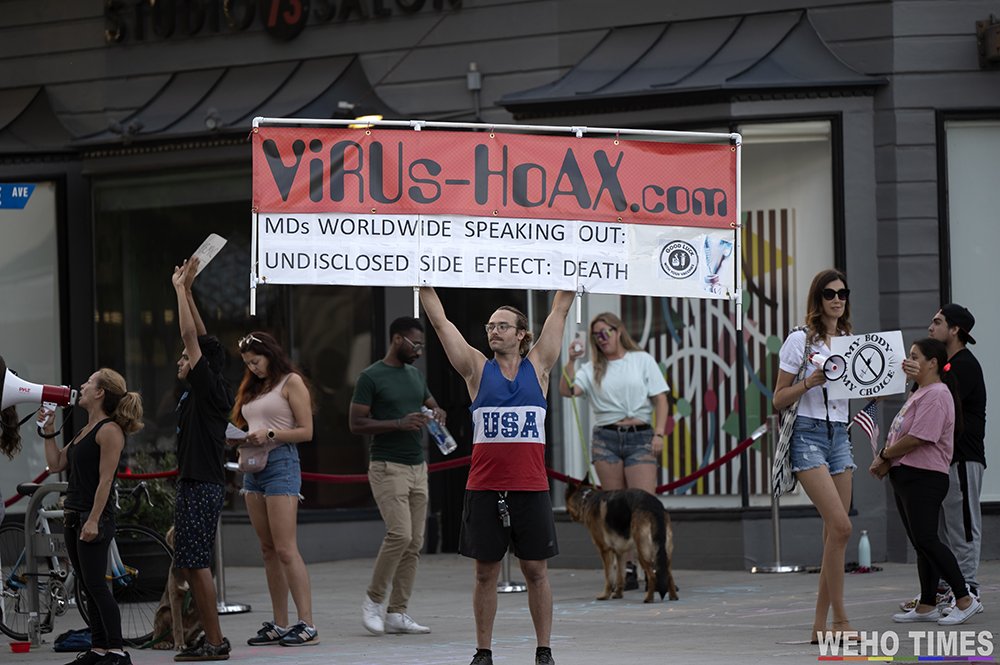 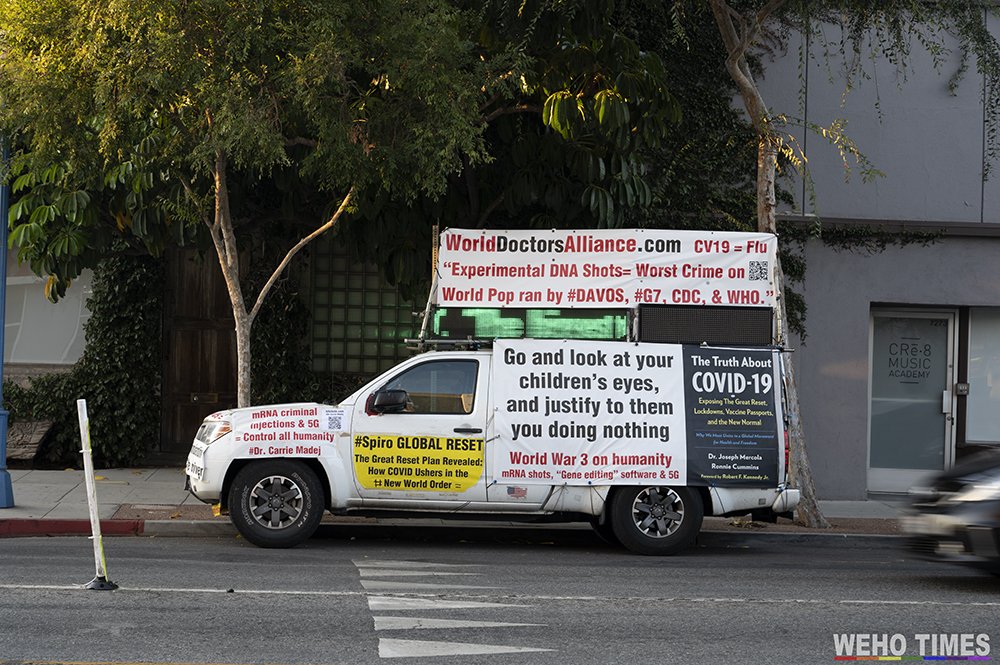 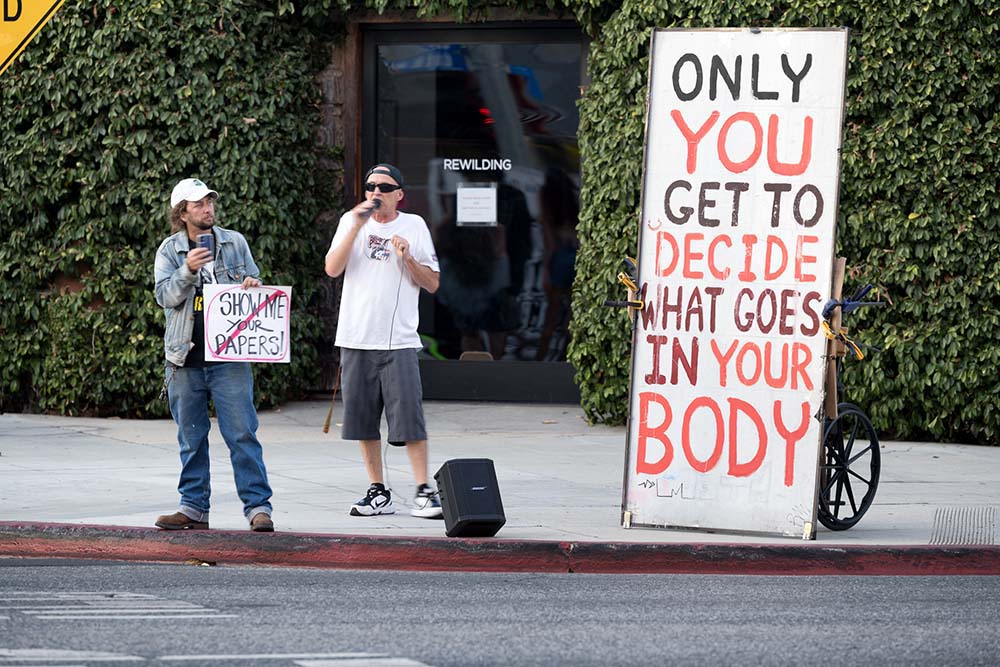 According to an Instagram Live post by Jason Lefkowitz, the organizer of the anti-vaccination protest, the goal is to make that area in West Hollywood unsafe, to hurt the business at Harlow and other businesses around the area.

“What’s good about this in my eyes is making the area unsafe,” he said to his followers. “It’s going to hurt the business even more. Trader Joe’s, which is right across the street, closed early because of everything going on, so it’s now on Harlowe.”

The protest last night escalated to violence when an anti-vaxxer got in a fight with the manager of the Phorage Vietnamese restaurant across the street from the Harlowe. The manager, who identified himself as Roger, told the protestor that he was trespassing. Insults were exchanged and a scuffle ensued with the anti-vaxxer trying to snatch the restaurant worker’s phone before pepper-spraying him in the face. The anti-vaxxer ran into the crowd across the street. He was chased by sheriff deputies and was tackled on the sidewalk. He was handcuffed and detained in the back of a sheriff’s vehicle. 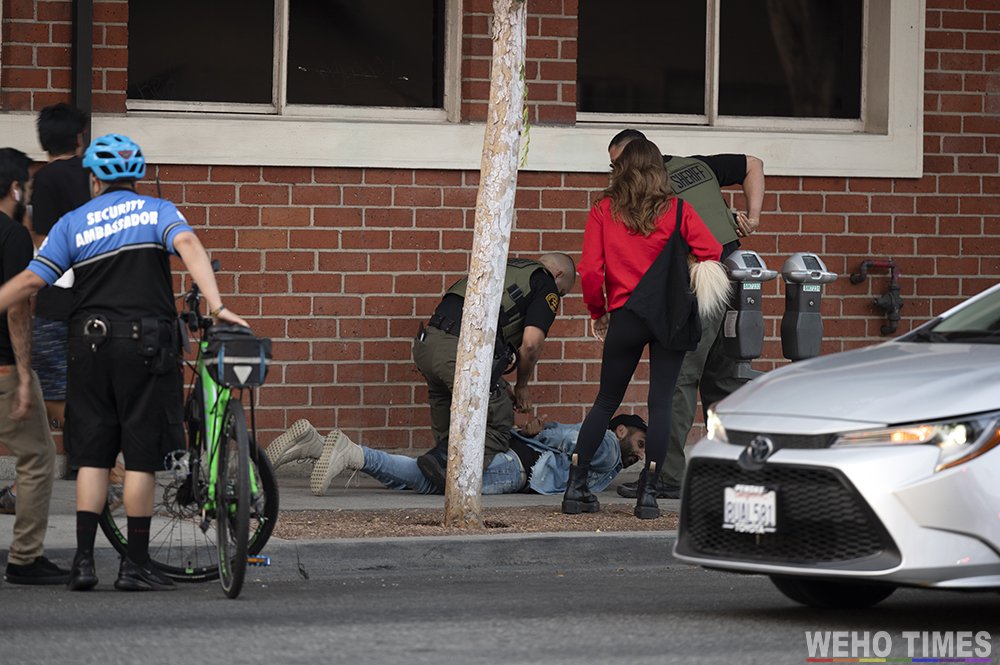 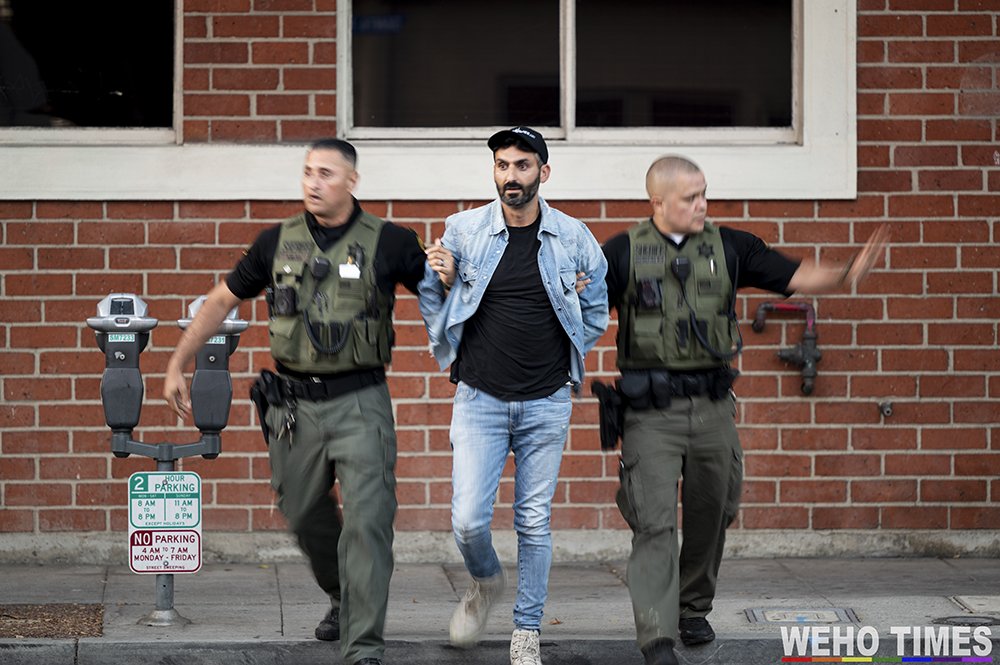 The restaurant worker received medical attention from paramedics. He told WEHO TIMES he was not pressing charges because he didn’t want to go through the hassle and he just wanted to get back to work. They let the culprit go.

Shortly after, a Native America man who was holding a sign that read “This Native says, ‘Your ignorance is a virus. Get vaccinated'”, was rushed by a mob and pushed around. He was pinned to a wall.

Another man holding a sign that read “Trump is the Virus” was roughed up. His mask was ripped out of his face, breaking the straps. They both weighed the situation and decided not to stay too long. 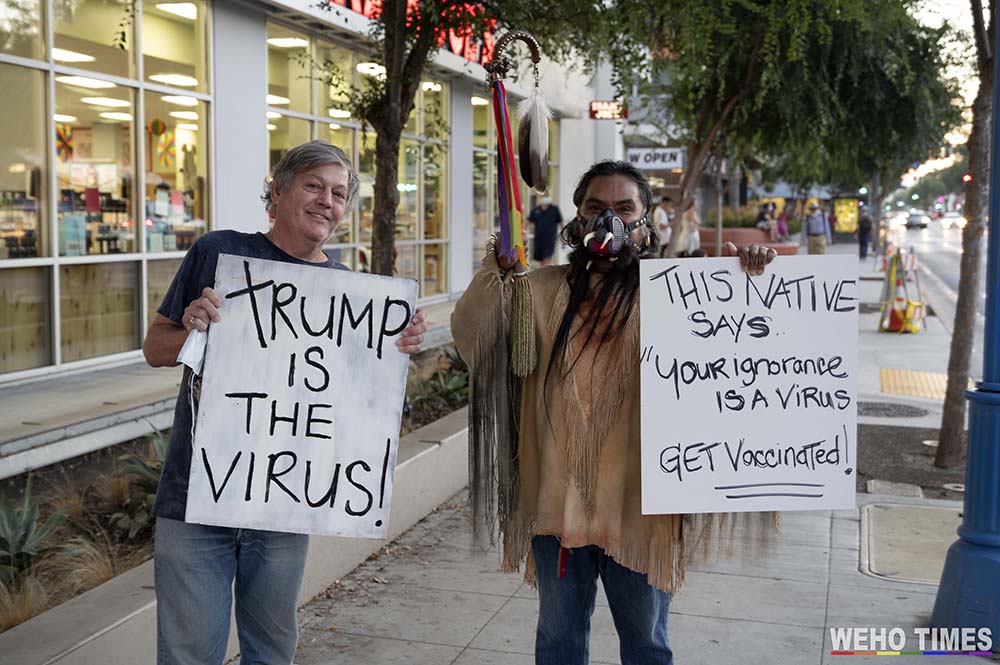 A woman opposing the anti-vaxx protestors threw water at a Bose portable PA system belonging to one of the protestors, silencing a woman who was in the middle of heckling this publication. The water thrower tried to leave the scene, but the mob rushed her and roughed her up. She was assaulted on the street, called a c*nt, a bitch and shoved numerous times.

Sheriff deputies were dealing with the man that had been pepper-sprayed. It wasn’t until they were yelled at to help the woman, that an officer stepped up. He walked up to a man pinning the woman against the window with his elbow at Trader Joe’s. The deputy handcuffed the man for physical assault and also detained the woman for destroying the man’s property. It is not clear if they were fined, but they were both let go later in the evening. 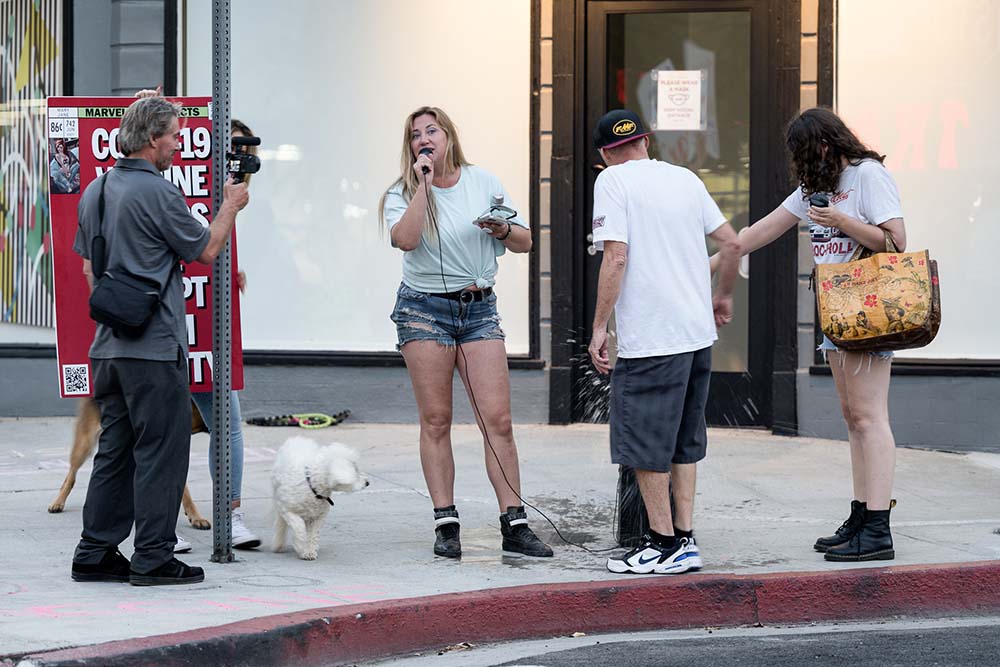 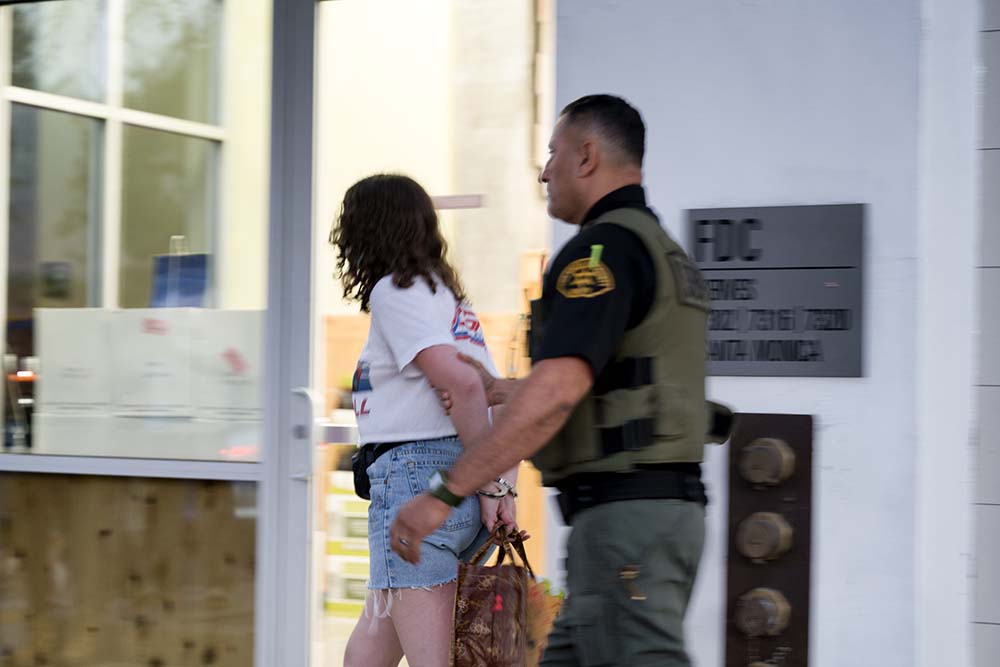 A fourth person was detained, the woman’s boyfriend, who was angry that she was being arrested for throwing water. He too was later let go.

When confronted about the aggressive energy taking place that evening, several protestors said bottles were thrown at them and that they were egged by those who opposed them. 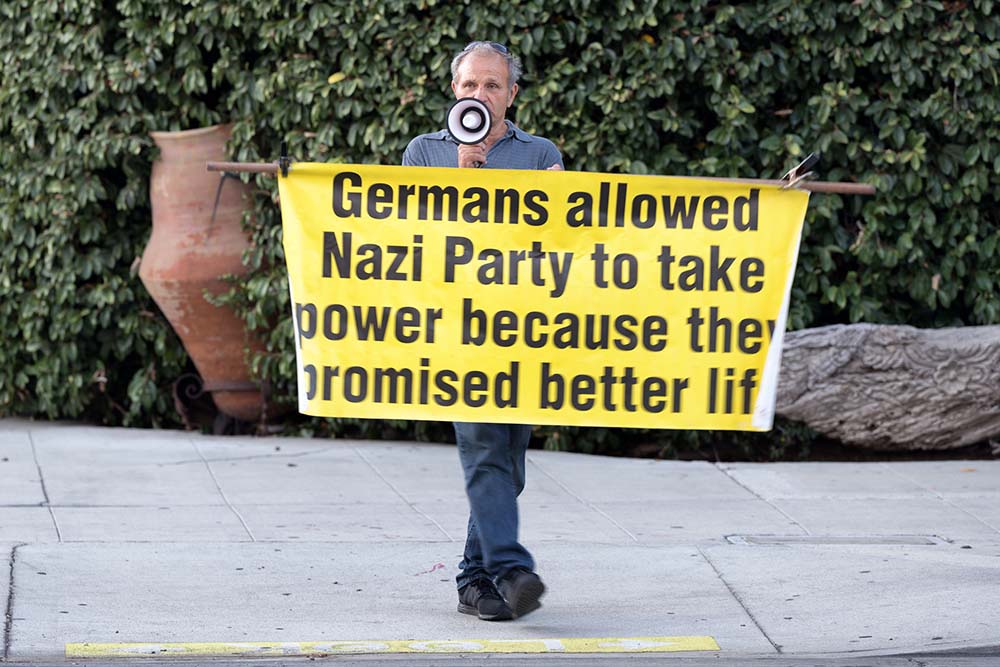 One brave man decided to stand with the protestors while holding signage that read “Eat @ Harlowes” on one side, and the other side read, “Try the fish, it’s delicious.”

His other sign read, “We love Fauci,” and “Get vaccinated. It’s Free! Yay! I love you.”

The man was rushed by the mob. People yelled at him and shoved him. At one point one of his signs was snatched and a man rubbed his crotch on it. Eventually they allowed him to stand with them and they appeared to engage in a somewhat civil discussion. 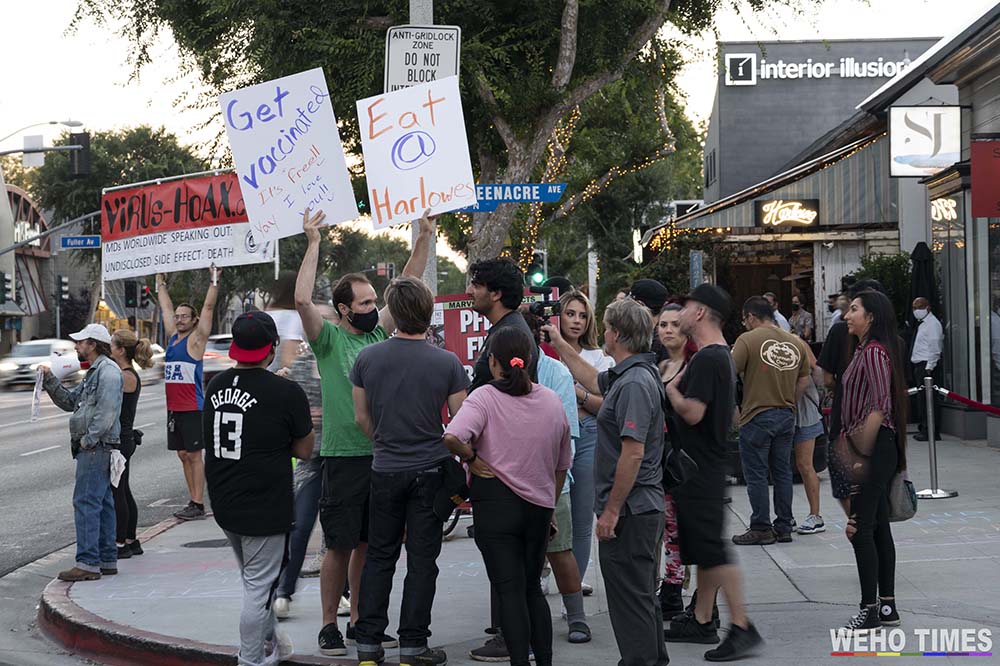 “I want to support any small business or person that is making good decisions for themselves,” the man who identified himself as James told WEHO TIMES. “They’re against being forced to do stuff and I just want to make sure that a business can function properly. I came up with my dog yesterday and had some conversations with people to try to figure out what was going on and what their beliefs are. Today I saw them again. I thought what could I do to help? I bought some construction board from Target, made my signs and I called Harlowe. A guy said the fish was good, so I wanted to support them, because it’s hard to get business when you have a bunch of people intimidating customers and wait staff.” 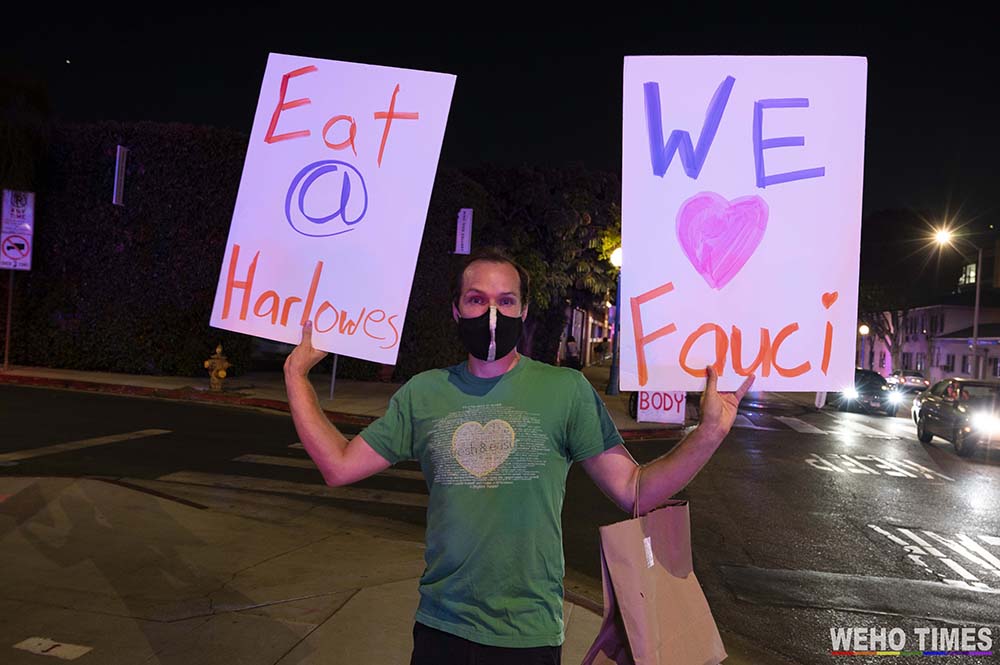 James said he feels people have too much time on their hands, haven’t been social in a while or lost their social circle. “There are a lot of talking heads out there giving out information,” he said. “A lot of it is not vetted. There are people who are emotional, whether it be because they are out of work, or sad because they’re not being social and unfortunately they hurt people. People generally try to find people of like mind, so when you have people who are hurt or scared, they build on that.”

Despite facing some hostility, James said he wasn’t scared. “There were people who ran and grabbed my sign,” he said. “They tried to push in front of me or do whatever, but that’s the thing honestly, I try to carry around an aura of calm and the idea is that people are looking for something. They get angry. They get emotional and they try to express themselves. I let them. They don’t get a reaction out of me and you know, if you go to Karaoke and nobody is listening, you stop going to Karaoke. I had people screaming at me with their megaphones. They were screaming about Nazism, which I don’t understand, and so I had conversations with some people in the group… people are people. Some people are good, some are bad and a lot of people don’t have the opportunity to show their best selves.” 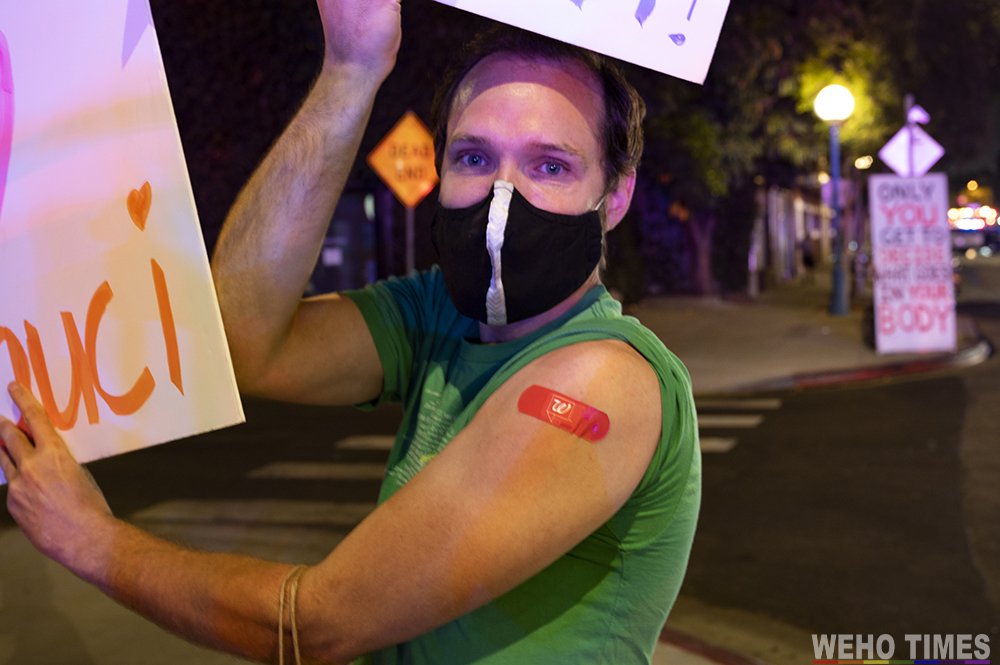 James said he did not have a negative COVID test, and that he had just gotten his first vaccine shot earlier that day, but he was still allowed to order take out from Harlowe.

West Hollywood Sheriffs called the gathering an unlawful assembly at 9:15 p.m. A protestor insisted they were not there illegally and that they had a right to protest until 10 p.m. before it became unlawful.

At 9:30 p.m., deputy vehicles closed off Santa Monica Boulevard and evacuated the protestors who dispersed peacefully.

Anti-vaccination protests will continue throughout the week at Harlowe. 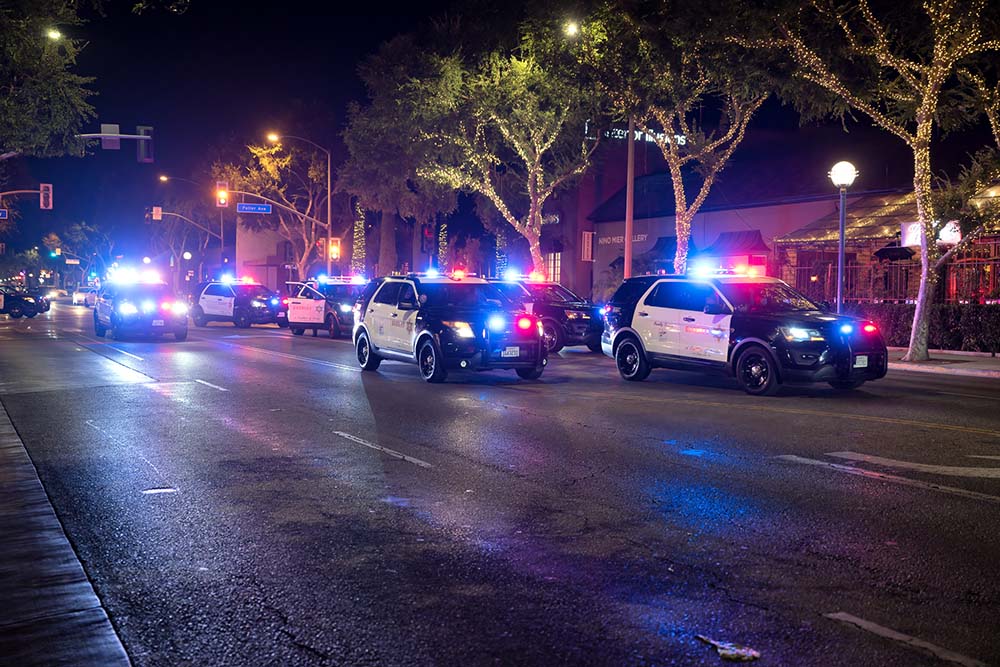 This article articulates, specifically the picture of the Trump haters, what you commiefornians are really about. Hate. Hate is a pill YOU swallow in the hopes that someone else gets sick. It isn’t working. Biden himself said he wouldn’t trust a vaccine from President Trump. It is true that he said this. Same with other elected officials. But yet now everyone is behind the vaccine! A healthy dose of skepticism is good for science. But a health dose of hate as visited upon those that are skeptical is what 1930’s Germany had become. Take a look at yourselves in the… Read more »

Those Trump haters didn’t bring their ignorant hostility to a privately owned restaurant. They are not the ones caught on video saying wretched things offensive to Jewish people, but those Trump haters is all you can focus on in this article. The way I see it, Trump poisoned the Kool-Aide with his pathetic “fake news” drivel, because he only wanted nice things written about him. Trumpturds drank that Kool-Aid up, no questions asked and now when the media reports alarming rise in COVID numbers, when they report that 99% of the people dying right now are unvaccinated, the Trumpturds refuse… Read more »

Your comment about “Commiefornians” clearly shows YOUR hateful derangement and ignorance. You defend deluded MAGA’s and Plague Dogs. Get some help. And a vaccine.

Vaxxed, not a commie
Offline
Reply to  Joe Pearson

Calling someone a commie is now hateful?! Oh okay. You definitely have a perverted way of defining hate. Reacting to such a comment as you have seems to have hit a nerve. Are you indeed a communist? You are ordering people to get vaccinated? For all you know maybe the commenter is vaxxed or maybe not, you have no way of knowing. In addition, 99% people that are dying are not unvaccinated and the mortality rate of Delta is much, much lower than the first strain of Covid-19. There are plenty of articles from all over the spectrum that prove… Read more »

NotTodaySatan
Offline
Reply to  Vaxxed, not a commie

Oh please. No one is ordering anyone to get vaccinated. This is about a small business minding their own business and exercising their American freedom to refuse service to those who “choose” to endanger their employees and customers. You all want to talk about patriotism and the freedom to choose. You don’t want to get vaccinated, that’s your choice. The Harlowe restaurant also has a choice. In this case it has chosen not to serve you. Go somewhere else. These so called patriots are targeting a small business, harassing their staff and their customers in an effort to shut them… Read more »

Anti-vaxers are killers……President Biden.
Anti-vaxers are responsible for this second virulent wave and will be the reason California must shut down again. They are ignorant, selfish, self absorbed imbeciles.

What a bunch of pathetic losers. Whatever, don’t get vaccinated then and go bye bye. The world (and gene pool) will be a better place without you freaks